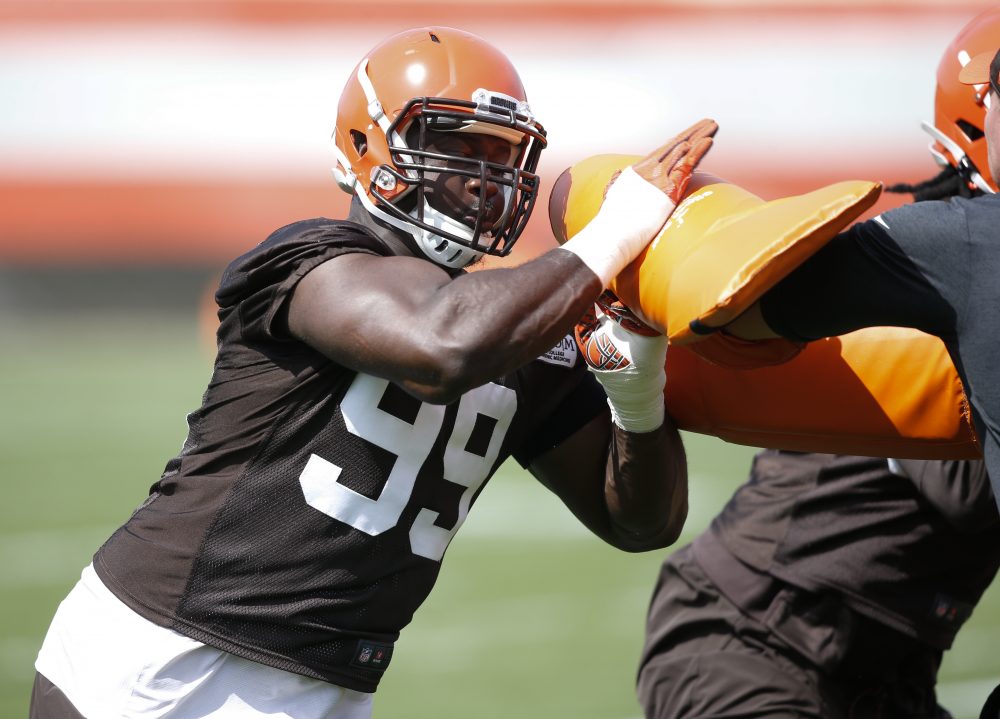 BEREA — Defensive tackle Devaroe Lawrence burst into the backfield yet again and dropped the ball carrier.

The sight had become familiar during training camp, but this time was special. Coach Freddie Kitchens yelled to the offensive linemen that they couldn’t block Lawrence and made him raise his hand to receive the credit.

“I was in such a zone, I thought I was in trouble because I just tackled the running back to the ground,” Lawrence said Monday after practice. “When he said that, I was like, OK, boom, accept the pat on the butt, but put your head down and keep working.”

He has three sacks in the preseason, including two Friday night in the 13-12 loss to Tampa Bay.

“Man, I can’t really explain it, but I’ll tell you, it’s something else, though,” he said of the feeling that follows a sack. “It’s an adrenaline rush. It’s a couple different things, and it’s better than a lot of different things, you feel me?”

Lawrence (6-foot-2, 295 pounds) joined the Browns on Sept. 1 last year when they sent a seventh-round draft pick to the Saints. He was cut a month later after appearing in one game and spent the rest of the season on the team’s practice squad.

When camp opened this summer, he was largely an afterthought in a crowded defensive line room. But all he’s done is make plays and take advantage of the extra opportunities when starting tackle Sheldon Richardson missed time with an abdomen injury.

Handing out the training camp awards

“Devaroe is a good example of somebody who did not worry about his surroundings, just worried about himself and stayed focused on what he had to do to get better,” coach Freddie Kitchens said. “I think you are seeing the results of that. Did he surprise us? I would not say he surprised us because anytime you trade for someone, your expectation level of them is up there, but he has definitely made good on his opportunities.”

After Lawrence, 26, destroyed offensive lineman Austin Corbett during a play later in camp, Kitchens marched up to him and raised his arm as if to declare him the winner of a title bout. Lawrence was asked if this is the best he’s ever played.

“I wouldn’t say the best, but I would say the most confident,” he said. “It’s making the best out of this opportunity and each day just getting up, letting my feet hit the floor and put my best foot forward, feeding the positive dog and not the negative dog.”

Lawrence was undrafted in 2017 and signed with the Saints but needed another knee surgery after tearing an anterior cruciate ligament as a senior at Auburn. He returned for the 2018 preseason and had 2.5 sacks but didn’t stick with New Orleans.

His spot on Cleveland’s 53-man roster seems secure this time around, and he’s trying to play with a sense of freedom.

“Stop thinking so much, just go play,” he said. “Scared to mess up, scared to make this mistake, scared to take that step, but when you get to doing that, you’re not playing fast. When I’m not thinking, I play faster.”

General manager John Dorsey, who traded for Lawrence, spent part of the offseason trying to land a big-name defensive tackle to form a three-man rotation with Richardson and Larry Ogunjobi. Gerald McCoy and Mike Daniels signed elsewhere, leaving Lawrence the chance to win the job.

“It lights a match up under your ass a little bit, get you going,” he said.

If Lawrence makes the roster as expected — Trevon Coley, Carl Davis and Daniel Ekuale are competing for the other backup tackle spot — he isn’t worried about a lack of playing time behind the starters.

“They’re good players, but they run out of oxygen, too,” he said. “They’re going to get tired, so when they tap on that helmet, I’m gone.”

The helmet tap means a player needs a rest. With his style of play, Lawrence will be reaching for his plain orange helmet.

“I’m going to give you everything I got until I run out of all my oxygen,” he said.

At 6-2, Lawrence is smaller than many defensive linemen and just about every offensive lineman. The lack of stature drives him.

Lawrence was just part of the sack attack against Tampa Bay. The Browns finished with seven, including two by end Olivier Vernon. Kitchens has been saying for months the defensive line is the strength of the team.

“I feel like that’s football. The team is going to go as far as the offensive line takes us and as far as the defensive line takes us,” Lawrence said. “If your big boys are not leading your team, then what’ve you got? Yeah, I mean, we’ve got our quarterback and you’ve got other guys in other positions that are leaders, but at the end of the day, it’s your big boys because your receiver and your quarterback ain’t going to walk up on nobody and scare them, but when your D-line and your O-line walk up, it’s like, ‘Yeah, boys, we fitting to have a fight today.’”

Entering a season filled with uncertainty, Joe Schobert out to re-establish himself as a Pro Bowler
Tight end Seth DeValve takes on fullback duty as he fights for roster spot