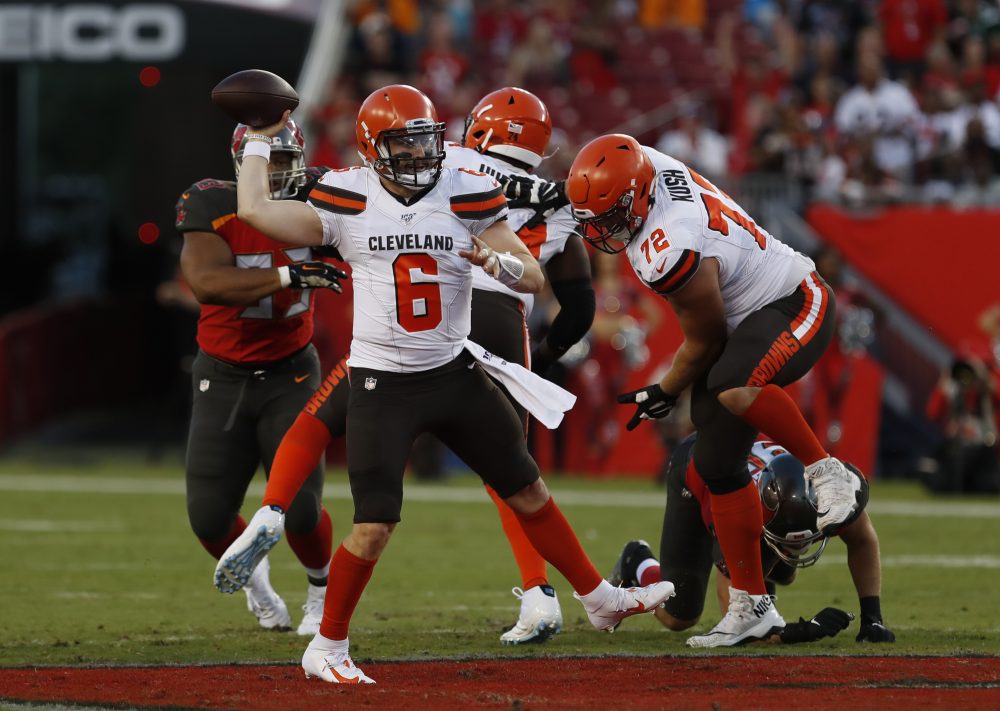 BEREA — Baker Mayfield’s preseason ended on a sour note. He was intercepted on his final throw to finish the first half Friday in a 13-12 loss at Tampa Bay, capping a night in which he went 10-for-26 for 72 yards, a sack, the interception and a 30.6 rating.

Coach Freddie Kitchens didn’t reconsider playing him Thursday in the finale against Detroit and is just fine with Mayfield heading into Week 1 coming off a lemon.

“I have total confidence he is going to be OK,” Kitchens said Tuesday.

Mayfield’s only other action of the preseason was one drive in the opener against Washington. The Browns used their two-minute offense, and Mayfield was 5-for-6 for 77 yards, a touchdown and a perfect 158.3 passer rating.

That and a good month of practice have Kitchens believing Mayfield will make a jump in Year 2.

“Baker is substantially better at reading coverages, deciphering blitzes, fixing the protections and recognizing the blitzes,” Kitchens said. “He is better in a lot of areas.”

“What he does very well and you can’t really teach is the escapability, getting outside the pocket and doing something with it then,” he said. “I do not think you can teach that part of it once you are outside of the pocket.”

Mayfield completed only 38.5 percent against the Bucs but didn’t get much help from his receivers, who dropped passes and didn’t come up with contested catches. Putting the ball where he wants is one of Mayfield’s strengths.

“He is tremendously accurate,” tight end Seth DeValve said. “Sometimes I’m turning around and the ball is right on my head. That’s hard to do. So I think he’s pretty good.”

Kitchens was asked if Williams has plateaued.

“I hope not. We are not planning on him plateauing anytime soon,” he said. “Hopefully he has his head down and he is trying to get better. I think that Greedy is getting better.”

The Browns made official the release of receiver Jaelen Strong.

He had seven catches for 52 yards and a touchdown in three preseason games but struggled Friday at Tampa Bay.

“I was not being facetious when I said that no position on the field played well the other night. That was one of them,” Kitchens said of the receivers. “Jaelen had a good camp. It was just a decision we decided to make.”

The Browns petitioned the NFL to allow running back Kareem Hunt and receiver Antonio Callaway to remain around the team during their suspensions to open the season, but Kitchens said he couldn’t reveal if the league had made a decision.

“That has not been made public yet so all that has to go through the league office,” he said. “We are not privy to answering questions for them.”

A league spokesman didn’t return an email from The Chronicle-Telegram.

Kitchens said Callaway would benefit from access to the team’s medical care as he rehabs a high ankle sprain. The organization also believes the structure of being in the building would help both.

Kitchens wouldn’t say whether Hunt will play Thursday against Detroit.