Analysis: Receiver spots on line in finale vs. Lions 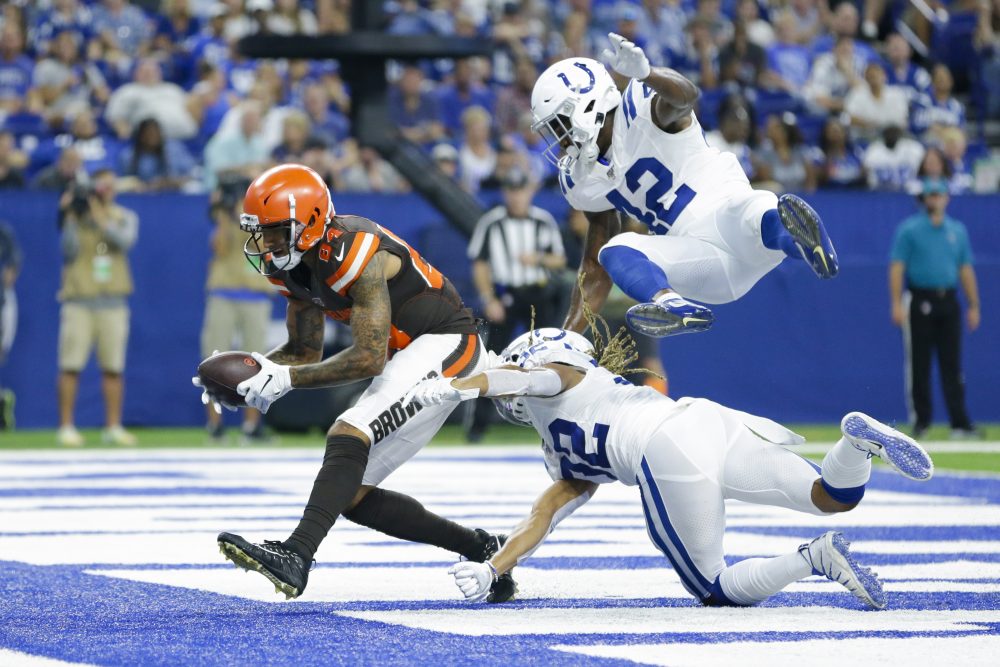 Just a few weeks ago, the receiving corps looked deeper than a conversation between philosophers. The assumption was at least a couple of the wideouts cut by the Browns would quickly find homes on other teams.

The position doesn’t look nearly as strong heading into the preseason finale Thursday night against the Lions and with cuts to quickly follow. The Browns must get down to 53 players by Saturday afternoon at 4.

“Well, they’re definitely going to get work and see if they can perform better than they did last week,” coach Freddie Kitchens said Tuesday of the receivers.

Jaelen Strong was cut Monday in a bit of a surprise. But he struggled Friday in a 13-12 loss at Tampa Bay, as did Derrick Willies and Rashard Higgins.

Higgins is a lock to make the team, along with starters Odell Beckham Jr. and Jarvis Landry. Antonio Callaway would join them but was suspended for the first four games for violating the NFL’s substance abuse policy.

Willies, Damion Ratley, Braxton Miller, Ishmael Hyman, Damon Sheehy-Guiseppi and Dorian Baker are the rest of the group. They’re competing for two or three spots, depending on if the Browns keep five or six wideouts.

Ratley (6-foot-2, 200 pounds) hasn’t played in the preseason because of a hamstring injury — Kitchens said he’d play vs. the Lions — but still might have the inside track on one of the spots. He was a sixth-round pick last year and had 13 catches for 144 yards in 13 games.

At 6-4, 207 pounds, Willies has size that would be unique for the Browns at the position. He had what looked like a breakout game last year against the Ravens before breaking a collarbone in practice. He’s alternated between flashing and faltering during training camp and the preseason, failing to show the consistency Kitchens demands.

Miller (6-2, 215) is the wild card. The former Ohio State quarterback signed last week and quickly got the attention of the front office and coaching staff.

“He’s picking up the offense, so that tells you a little bit about his learning ability and we’ll see if we can put him in some positions to make some plays Thursday night,” Kitchens said. “He’s doing well, though.

Hyman, Sheehy-Guiseppi and Baker are long shots but could steal a job with a big finale.

Here are four other positions to watch:

The team had a decision to make with how to handle the kicking chores in the finale.

After rookie Austin Seibert got all the kicks against the Buccaneers and went 4-for-4 on field goals, it would be fair to give Greg Joseph the chance to match him. But Seibert had struggled severely before the perfect night in Tampa, so the Browns may want to see if he can duplicate the performance before handing him the job.

Joseph was better than Seibert for much of camp but missed two kicks in the preseason and has slumped in practice. If Seibert were to flop against the Lions, general manager John Dorsey may be forced to find a kicker elsewhere.

Seth DeValve, in his fourth season, has crossed over to fullback in an attempt to save his job after missing three weeks with a concussion. He’s had several drops in limited snaps and is squarely on the bubble.

Rico Gathers was a late-comer to camp and would be suspended for the opener for violating the substance abuse policy. Pharaoh Brown has struggled with drops, and undrafted rookie Stephen Carlson doesn’t seem ready.

DeValve may get the spot by default, but more likely his replacement is claimed off waivers.

There’s no shortage of talent here.

Sheldon Richardson and Larry Ogunjobi are locked in as starters, and Devaroe Lawrence has seemingly secured a roster spot with a fantastic camp and three sacks in the preseason.

Trevon Coley started 29 games over the last two years but is more of a run stopper than pass rusher. He’s fighting with Carl Davis, Daniel Ekuale and Brian Price for what is probably one spot.

The question is how many will be kept. If the Browns take one less at receiver or go without a fullback, that could open a spot for a deserving cornerback.

Denzel Ward, Terrance Mitchell, Greedy Williams and TJ Carrie are locks. Phillip Gaines probably is, too, as he’s the second-best nickelback behind Carrie, and the other three locks can’t play in the slot.

Tavierre Thomas is a special teams ace, rookie Donnie Lewis Jr. is a draft pick and Lenzy Pipkins has shown up during camp. If the Browns go with six corners, the choice would come from that trio.

Analysis: As real season nears, Browns must refocus after offensive clunker vs. Buccaneers
Predicting the 53-man roster: Tough decisions at receiver and D-line