Woke up feeling … Progressive? Baker Mayfield teams up with insurance company for ad campaign ‘at home’ 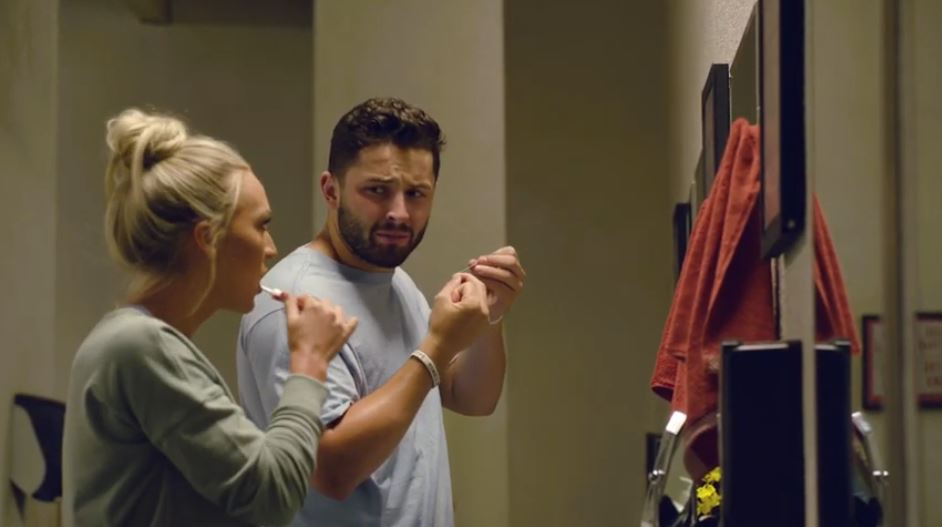 Mayfield, who says he was born to play quarterback in Cleveland, became the newest spokesman for Progressive Insurance, which just happens to be based in Mayfield Village.

The “At Home with Baker Mayfield” ad campaign was announced Wednesday, and Progressive employees attended a launch party with Mayfield and wife Emily on stage.

“As soon as I came into the building, you get a bunch of people that are true Clevelanders,” Mayfield said. “So just the passion you can feel, the energy you can feel in the building.

Mayfield married Emily Wilkinson in July, and the comedic commercials show the newlyweds “living” in FirstEnergy Stadium, Mayfield’s home away from home on Sundays in the fall.

In one ad, Mayfield can’t figure out the circuit breaker. In another, he starts mowing the field. They are scheduled to debut Sept. 5 and run throughout the NFL season on national TV.

Three ads, as well as behind the scenes interviews with Mayfield and his wife Emily, can be seen HERE.

“It’s funny because it’s true. It’s so realistic,” Mayfield said. “Some of the things were even more funny to us because they hit very, very close to home.”

Mayfield says he was born to play in Cleveland

The Mayfields filmed 20 commercials over two days about 10 days before they were married. Emily said she was “a little reluctant” to be included but liked the concept.

“A lot of it was not acting,” she said. “Seriously stuff that happens at home.”

Progressive, which substituted Mayfield’s No. 6 for the “g” in its logo, was founded in 1937 and is the third-largest auto insurer in the country. Its award-winning ad campaigns and characters include Flo, Baby Man, Rebel and Motaur, the mythical half-man, half-motorcycle character.

Chief marketing officer Jeff Charney said the Mayfield campaign is different than others for a simple reason.

“We’re not glorifying, we’re making the athlete very real, everybody can relate to the athlete,” he said.

Mayfield already experienced a perk of working with Progressive. He got to meet Flo.

“One of the nicest people I’ve ever met,” he said. “She’s a very vibrant personality.”