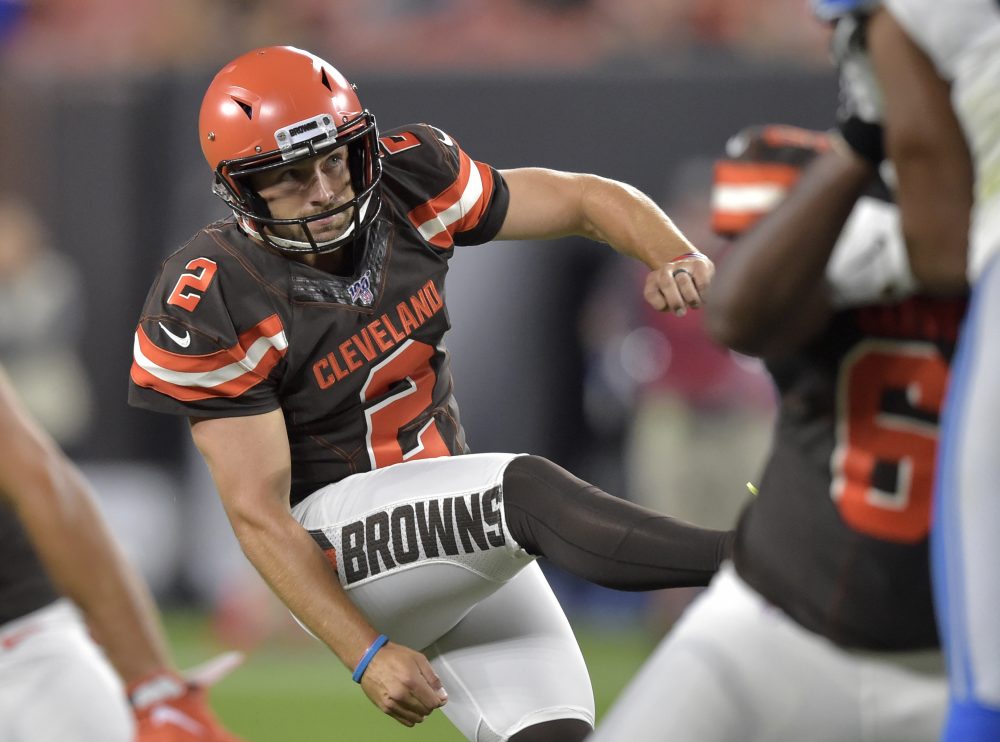 CLEVELAND — Austin Seibert got hot at the right time.

It probably won the rookie the kicking job.

Coach Freddie Kitchens reversed course and had Seibert, rather than incumbent Greg Joseph, handle all the kicks for the second straight preseason game Thursday night. He made 36- and 33-yard field goal and two extra points — without a miss — as the Browns beat the Detroit Lions 20-16.

Seibert went 4-for-4 on field goals with a long of 54 yards last week against Tampa Bay and finished the preseason 6-for-7 on field goals and 6-for-6 on extra points.

“He went 4-for-4, so he got another chance,” Kitchens said after the game.

The Browns went 3-1 in the exhibition season.

The vast majority of the Browns starters didn’t even dress against the Lions, standing on the sideline to watch the backups battle for the final roster spots. Cuts are due Saturday at 4 p.m., with the long-awaited regular season starting Sept. 8 against the Tennessee Titans back at FirstEnergy Stadium.

Seibert will likely be there.

The fifth-round pick out of Oklahoma righted himself at the end of the preseason after a rough start to training camp, which followed an ugly offseason. Joseph failed to seize the job during Seibert’s struggles, missing two kicks in the preseason and slumping in recent practices.

“You just gotta work through stuff. You can’t get down on yourself,” Seibert said. “That’s ultimately made me a better kicker. I’ve got a stronger mindset because when you start missing kicks like that your teammates start losing trust in you, you have to believe in yourself. So that’s what I did and I’m starting to earn trust again.”

Undrafted rookie Jamie “The Scottish Hammer” Gillan took all the punts for the second straight game, and added holding duties on place-kicks. Gillan averaged 44.3 yards with a 33.3 net on six punts, with one inside the 20-yard line, and was in on two tackles.

Gillan is trying to take the job from veteran Britton Colquitt, who was a Pro Bowl alternate last year and is entering his 10th season. Kitchens characterized Gillan’s day as “up and down,” but Gillan thinks he’s coming on at the right time.

The game was marred by 22 penalties and overall sloppy play. Browns tackle Travis Vornkahl was the perfect example.

In a three-play stretch, he was penalized for an illegal block, caught a deflected pass for a 7-yard loss and was called for holding in the end zone, giving the Lions a safety.

Defensive tackle Devaroe Lawrence was on the other end of the spectrum. He opened the game with a sack, drew a face mask penalty on a pass rush and drew a holding call before end Chad Thomas got a sack of Tom Savage, who started in place of Matthew Stafford, who got the night off.

Lawrence already had a roster spot secured and continued to make a case for playing time when the season starts. He finished the preseason with four sacks.

“He wasted no time tonight,” Kitchens said. “I think he kinda wanted to show everybody that wasn’t a fluke. So I think he certainly did that.”

The Browns finished with seven sacks, giving them 19 in 16 quarters.

“We definitely have a pretty good defense,” cornerback Denzel Ward said during the broadcast. “We let all the hype and everything go to the offense right now. We will show what we have to do on defense next week.”

There wasn’t much clarity in the cloudy receiver competition.

Ishmael Hyman caught five passes for 61 yards but had back-to-back drops in the first quarter, including a long post from No. 3 quarterback Garrett Gilbert (13-for-24, 117 yards, touchdown, 81.4 rating) that may have been a touchdown. Derrick Willies caught two passes for 46 yards, and Damion Ratley had no catches on one target in his only action of the preseason.

“It was very impressive that Ishmael Hyman came back and had a pretty good game,” Kitchens said. “I like guys that face adversity and come through it. He did that.

“I thought Ratley moved around well. So we’ll see how it goes.”

Former Ohio State quarterback-turned-receiver Braxton Miller had three catches for 19 yards as he tries to make the roster after being signed last week.

“I definitely want to make this team,” Miller said. “It feels like I am supposed to be here.”

Receiver Odell Beckham Jr. didn’t play in his first preseason with the Browns as he dealt with a minor hip injury but is ready for the season to start.

“I have my house that I am about to move into so I am starting to settle in,” he said on TV. “It is getting more and more real, and I guarantee when I hear the national anthem next week it will be really real.”