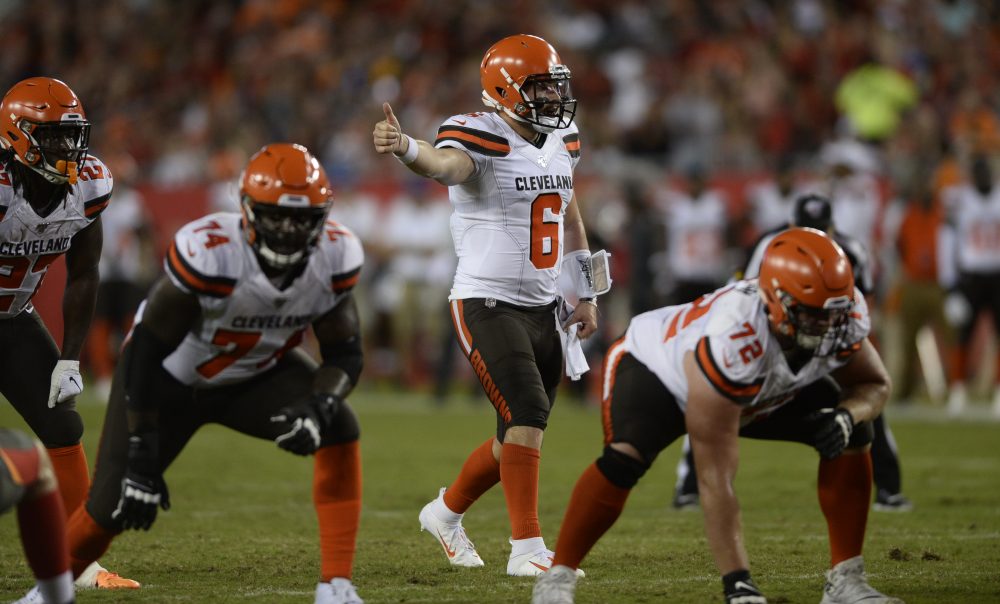 Q: Hate to overreact, but the offensive line looked porous Friday night. The run blocking was also non-existent. Talk me off the ledge regarding the O-line … please!

A: Come back inside. Everything will be OK.

Having said that, the line wasn’t nearly good enough against the Buccaneers and is cause for concern heading into the season.


Obviously, the trouble areas are left tackle Greg Robison and right guard Eric Kush. Neither has established himself as a reliable starter in five and six years in the league, respectively. Robinson was good enough over the final eight games last season, but quarterback Baker Mayfield’s elusiveness and pocket awareness bailed him out on multiple occasions. Kush won the right guard battle by default and needs to show he’s more than just a journeyman backup.

Robinson was the No. 2 pick of the 2014 draft, so the talent is there. He has struggled with confidence issues but feels supported by Mayfield and the Browns. He must turn that into consistent play, which was missing against Tampa Bay’s Noah Spence.

Teams don’t do much game-planning during the preseason, so the linemen were often left in one-on-one situations against the Buccaneers. In the regular season, the coaching staff will be able to cover a matchup problem with the protection scheme. That works if there’s one soft spot, but it’s much more difficult with one on each side of the line. Mayfield will help by getting rid of the ball quickly, but Robinson and Kush — or whoever’s playing right guard — must be better than they were the other night.

Q: Is the O-line the main weakness?

A: Yes. See above. And a bad offensive line can sabotage a season.

Kicker is next in line in the weakness department.

Q: Did you feel that the play calling was very unbalanced Friday night vs. the Bucs? It seemed like the running game was an afterthought. Is this the influence of Todd Monken?

A: It was certainly unbalanced. The Browns threw the ball 26 times in the first half and ran it five times.

I don’t think that’s a sign of what’s to come in the season. The coaches wanted to test the line’s pass protection in one-on-one matchups (it got a D) and see how the backup receivers fared (F) while keeping running back Nick Chubb healthy on the sideline.

I know Todd Monken has a well-earned reputation of throwing all the time, but I don’t think he was the issue against the Bucs. Coach Freddie Kitchens is determined to use the preseason to work on specific things.

Q: Todd Monken is respected throughout the NFL, ran a highly productive offense. With Freddie Kitchens calling plays, is Monken at least designing some plays? Setting game plans? I fear Monken’s talents are going to be underutilized.

A: Kitchens said on his weekly radio show Monken called some plays during the first three preseason games and will again in the finale against the Lions. That’s a good sign for Monken being included, but I share your concerns about how much Monken will be utilized. It’s a delicate balance between Kitchens keeping his system and philosophies from last year and incorporating Monken’s experience and expertise in the Air Raid offense. I think the relationship remains a work in progress, but Monken will have some influence.

Q: Scott, what’s your thoughts on the first-team offense’s lack of preseason game experience together? Do you think that will impact the first game or two as far as play calling and effectiveness?

A: My primary thought is that I’m fine sitting the best players so they make it to Week 1 healthy.

That doesn’t mean there isn’t concern about a lack of timing and chemistry. Freddie Kitchens is confident the missed repetitions can be made up in practice, but it’s not the same. So I would expect some bumps in the road in the first couple of games, especially between Baker Mayfield and receivers Odell Beckham Jr. and Jarvis Landry after the starting receivers didn’t play in the preseason. But nothing too bad to overcome.

A: Fifty-five. I don’t think the Browns would’ve signed him if they weren’t serious, and they like his speed, experience and potential as a returner.

Q: Anyone under the radar who has stood out to you throughout camp and the preseason?

A: Defensive tackle Devaroe Lawrence and running back D’Ernest Johnson were my two biggest surprises. They went from completely off my radar to on the roster. Lawrence was unblockable at times, while Johnson used his toughness in blitz pickup to earn a longer look as a runner/receiver/returner and took advantage.

A: I like it and think you picked the perfect total. Dorsey will probably make two trades in the next couple of days — low-level ones, no blockbusters — but I’m going to take the under with one. The most obvious targets are right guard, tight end and possibly left tackle.

Q: I keep reading that the Scottish punter, Jamie Gillan, is being tried as holder. Why? Simply because he is a specialist and wouldn’t rob, for instance, a backup QB from practice reps in order for the kickers to polish their craft? If so, why not simply use the punt return specialist as holder for placements? His hands would figure to be reliable and his speed a potential asset, exploitable on fakes.

A: You’re always thinking outside the box, Mark, and I appreciate that.

First of all, Gillan’s lack of experience as a holder would likely be the main reason if he doesn’t make the roster. And the punter has almost universally become the holder across the NFL because of the amount of practice time he can spend working with the kicker. They are together all day.

I get your objections and alternatives, but I think the coaches just don’t want to take away practice time from any other position. The return specialist is a receiver, running back or cornerback who is busy throughout practice. Your idea could work, but it would take tweaking the current system and extra time after practice.

Mailbag: Is Baker Mayfield-Odell Beckham Jr. chemistry really a concern? Does Damon Sheehy-Guiseppi have shot to make roster? Can rookie LBs work way into starting lineup?
Mailbag: In what areas can Baker Mayfield improve? Who’ll be inactive today? Can Browns-Patriots be flexed to Sunday night?