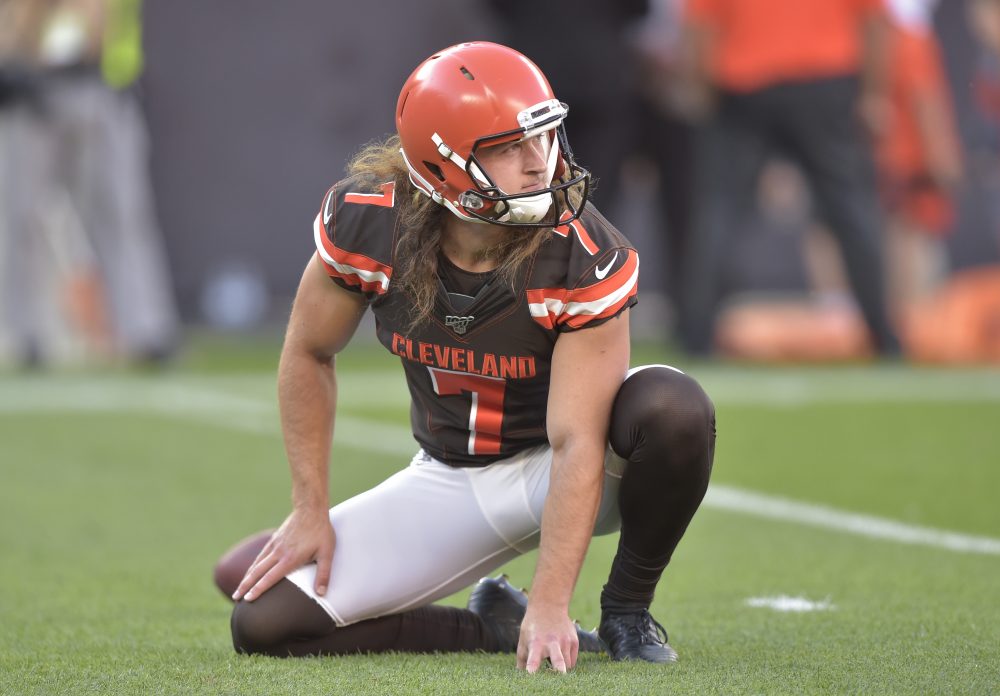 They hope to share a long future as the Browns’ kicking duo.

“Oh, dear, sweet little vision,” Gillan said in his Scottish accent Thursday night after a 20-16 win over the Lions in the preseason finale. “You’ve always got to envision stuff like that. Yeah, it would be cool. Getting to grind every day with Austin would be awesome.”

Coach Freddie Kitchens wouldn’t talk about roster decisions in the minutes after the game, but two of the most interesting ones to be made before Saturday afternoon’s cut deadline involve the guys who kick balls for a living.

Seibert, a fifth-round pick out of Oklahoma, likely cemented his spot on the team by making 36- and 33-yard field goals and a pair of extra points against the Lions. The perfect night followed a 4-for-4 field goal performance the week before at Tampa Bay that jolted him out of a slump and put him back in position to win the job.

Gillan, nicknamed The Scottish Hammer, was undrafted out of Arkansas at Pine Bluff but got the attention of the Browns with his powerful left leg. He isn’t as consistent or savvy as 10-year veteran Britton Colquitt and isn’t a lock to stick around, but the Browns may choose his upside.

Seibert would love Gillan to join him as the future of the special teams.

Seibert finished the preseason 6-for-7 on field goals and 6-for-6 on extra points and said he never got down during his struggles at the start of training camp. He did wonder if they might cost him the job.

Seibert watched old film of himself, kept the same routine he had at Oklahoma and tweaked his technique.

“Yeah, a little bit,” he said. “It’s just like a car. You’ve got to get your tires realigned. That’s exactly it. I just had to get realigned.”

“Absolutely proud of him, but I knew that was going to happen,” Gillan said.

Seibert’s draft status bought him time and extra chances, and he kept grinding.

“You get little rough patches, you can’t get down on yourself, you’ve just got to keep working,” he said. “And that’s what I did, just work through it. And that’s ultimately made me a better kicker.

“I’ve got a stronger mindset, because when you’re missing kicks like that your teammates start losing trust in you, you have to believe in yourself. So that’s what I did and I’m starting to earn trust again. So that’s the battle of kicking.”

If Gillan makes the team, it would be the next chapter in a remarkable story. He came to the U.S. when he was 16, joined the high school football team in Maryland and got a scholarship to Pine Bluff after his friend saw on Facebook it needed a kicker. While practicing for the NFL, he kicked so hard he busted three of the four official balls he bought.

Kitchens called Gillan’s performance vs. the Lions “up and down,” but he finished the preseason with a 46.1-yard gross and 41.4 net on 17 punts, including six inside the 20-yard line. He said he won’t fret about his fate over the weekend.

“Oh, I’m just going to sit back and whatever happens happens,” he said. “Everything happens for a reason, that’s a big belief of mine. If I do get the chance to be on this team, great, that’d be awesome. I don’t feel I’ve done anything, though, I’ve just made a ballclub. I’ve got to go and be the best punter I can be and help the punt team and the team to greatness.

“But if I don’t and I get cut, so be it, that’s just how the cookie crumbles sometimes and I can sit back and say I worked my butt off and tried my hardest every day. I couldn’t have done any more to do better. So I’m cool.”

He’s still raw but believes he’s made strides in directional punting, hitting the ball high and landing it inside the 20.

Colquitt has a significant edge on Gillan as a holder for place-kicks, but Gillan held for Seibert’s four kicks Thursday without incident. He’s come a long way after not holding in college because he was the kicker, too.

“That was everybody’s big thing was, ‘he can’t hold,’ but we work all the time in practice and so it was good to go out there and get it done in the game.”

Tackling will never be an issue for Gillan. The former rugby player was in on two more Thursday after a big hit against the Buccaneers.

“I actually know how to tackle and where to put my head and shoulders and body position,” he said.

Tight end Seth DeValve takes on fullback duty as he fights for roster spot
From hot tub in Buffalo to practice in Cleveland, Wyatt Teller’s “first rodeo” of being traded quite the “whirlwind”