Star-studded new offense set to debut, is the stuff of “dreams” as Browns look to justify hype with Week 1 win 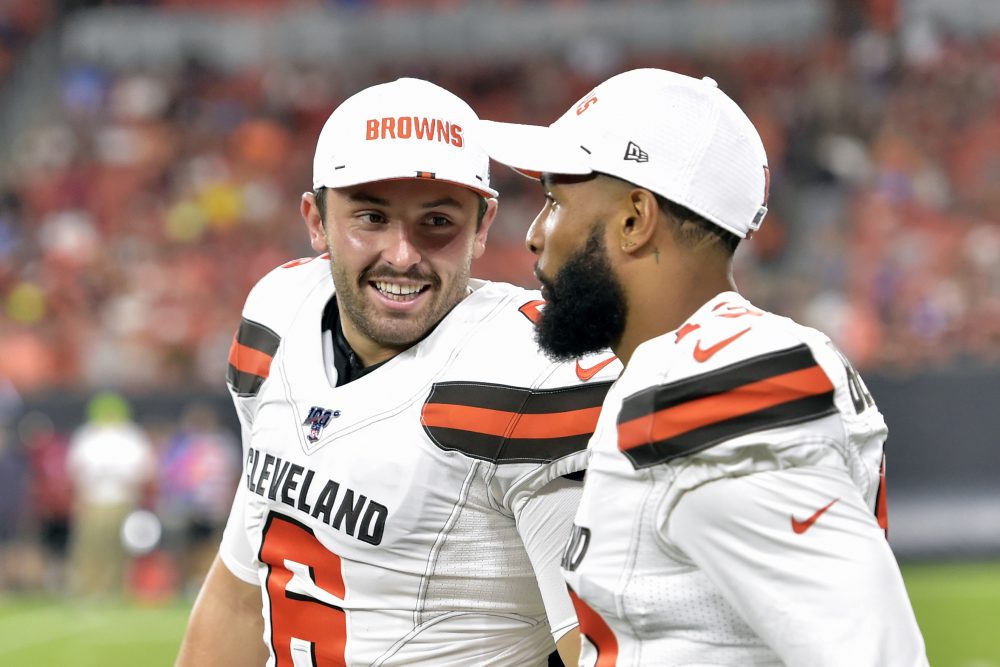 BEREA — The big reveal will take place Sunday in front of 67,000-plus frothing fans after a wait of nearly six months.

Training camp contained glimpses of the new Browns offense that will feature receiver Odell Beckham Jr., but he and receiver Jarvis Landry didn’t play in the preseason and running back Nick Chubb played one series.

So the opener against the Titans at FirstEnergy Stadium will be the debut of what’s expected to be a high-powered offensive experience directed by coach Freddie Kitchens.

Right tackle Chris Hubbard has seen enough to make him smile in the middle of the night.

“I have dreams about it,” he said Wednesday. “So I’m excited to see what happens. I know it’s going to be fireworks.”

Kitchens witnessed an increase in the intensity as Week 1 got closer. It coincided with an offensive clunker against the Buccaneers and the return of Beckham to team drills after missing three weeks with a minor hip injury.

Mayfield has been focused on improving communication and fine-tuning the details, and downplayed the notion that a lack of preseason repetitions with Beckham will hurt their timing.

“I’m very excited to see what we can do, what we’re capable of doing out there,” he said.

Beckham vows to not let down Mayfield

Beckham’s the brightest star on offense, but Landry, Chubb and tight end David Njoku are also weapons who require the ball to showcase their talent.

“I am going to make everybody happy,” said Kitchens, who will call the plays. “More importantly, hopefully, we win the game and it will make everyone happy. That is the only important thing.”

Mayfield also believes there will be plenty of opportunities to go around.

“I absolutely do,” he said. “I have full confidence in all of our guys, all of our playmakers, skill position guys that if they have one-on-ones, they should be licking their chops because they should all take that as disrespect.

“But that’s the type of team that we have and need to take advantage of. It’s going to be a matchup game.”

The opener begins one of the most anticipated seasons in team history and ends an offseason overrun with excitement, hype and playoff predictions.

“Ooh, it’s going to be rockin’ on Sunday,” Hubbard said. “Better believe it.”

“We finally get to go out and show the world what we’ve been doing the last two, three months because there’s been a lot of talk,” Randall said. “I’m tired of hearing the talk. I’m ready to play football, period.

“The fact that it’s finally here, I’m definitely stoked, happy about it, and I hope the fans are ready to go because we are just as excited as they are.”

The anticipation has been building since last season ended, and got a bump with the trade for Beckham.

Mayfield is in a much different spot than a year ago, when he entered his rookie season as the backup to Tyrod Taylor. He’s taken on more of a leadership role and control of the offense.

“Absolutely, and it was very beneficial to be the guy going into it, being able to give my input on certain things, certain concepts and how we’re doing things,” he said.

“I feel like he’s more confident,” receiver Rashard Higgins said. “He’s more confident in knowing what he’s doing. Pre-snap, he’s re-IDing the whole defense, little things like that, and it’s going to take us a long way this year.”

The Browns are 1-18-1 in season openers since returning in 1999, with the win coming in 2004 and the tie last year. A victory is expected this year.

“Getting off to a good start for us is important,” Mayfield said. “We have a pretty tough first half of the season looking at the schedule.”

A win over the Titans would begin to back up all the talk about the playoffs, but Randall says it’s not a must.