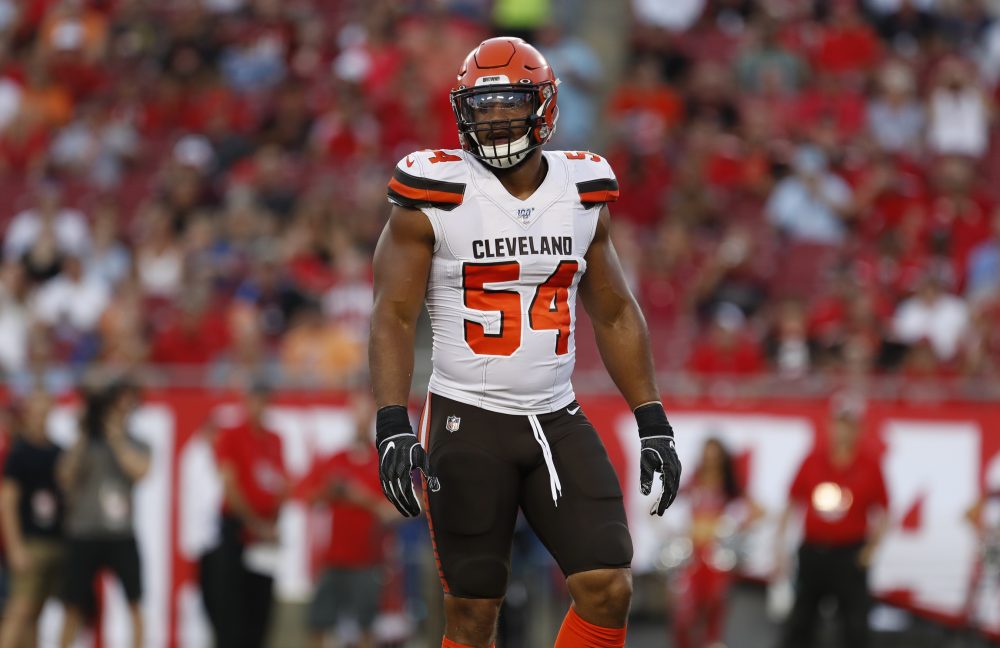 BEREA — Defensive end Olivier Vernon made an appearance on HBO’s “Hard Knocks” despite being 2,500 miles away from the cameras.

Oakland Raiders coach Jon Gruden showed his players film of Vernon against the Buccaneers during the preseason — Vernon had two sacks — and piled on the praise during the season finale that first aired Tuesday night.

Vernon was acquired from the Giants in a March trade, so he missed the Browns’ appearance on “Hard Knocks” last year. He said he kept hearing about this season’s cameo.

“Much love to Gruden, man, he’s shown me love during my whole career,” Vernon said Thursday. “Appreciate it.”

Even without the heartburn-causing and esophagus-wrecking breakfast, Vernon has also made an impression on his new coaches and teammates.

“These guys kind of follow him and listen to him,” coach Freddie Kitchens said. “He is a very strong player as far as his strength. He will surprise you with his athleticism and his bend.

“He is a good player. Everybody knows he is a good football player, but the one thing most people would not realize is how people tend to follow him and listen to him.”

Vernon, 28, is the elder statesman of the talented defensive line, edging tackle Sheldon Richardson by about seven weeks. He’s part of a defensive leadership committee that meets with new coordinator Steve Wilks.

“I just try to lead by my actions. I’m not really a vocal person like that,” Vernon said. “Going into eight years right now, I try to lead by example as much as I can, try to show the young guys how some of the things are done.”

Vernon has 51 sacks in seven seasons, including seven in 11 games last year with the Giants as he made his first Pro Bowl. The Browns traded right guard Kevin Zeitler for him in order to have a bookend for Pro Bowl right end Myles Garrett.

They sandwich tackles Richardson and Larry Ogunjobi for a front four that’s been described as scary, dominant and the strength of the team.

Garrett told ESPN The Magazine in its Body Issue that the line will create a “bloodbath” for opponents.

“Pretty much. A little extreme on the words, but definitely, everybody wants to be great on the D-line, the defense period,” Richardson said. “It’s a friendly competition amongst us all. Nobody wants to be second to nobody, it’s fun.”

The starting line was together for one series in the preseason, collecting a pair of sacks to open the Tampa Bay game. The backups also dominated for stretches, particularly tackle Devaroe Lawrence, who finished the preseason with four sacks.

“We know what we’re capable of, we’ve just got to put it out there on the field,” Vernon said. “We aren’t really focusing on what’s going on on the outside, what people are trying to put us up on some type of pedestal. We know what we can do and all we’ve got to do is work hard and see how it goes from there.”

Wilks was encouraged by the line’s performance in training camp and the preseason.

“I was very excited with the way we played. I thought we had a great camp,” he said. “I thought the guys really bought into the system with what we want to accomplish, and I was excited to see that we were flying around. The things that we talk about, the physicality, the effort and our ability to finish, we definitely did that.

“I am excited about where we are and, yes, I definitely expect us to continue to do what we have been doing in the past.”

The Titans are missing suspended Pro Bowl left tackle Taylor Lewan and will have to compensate in their protection schemes in an attempt to slow down Garrett and Vernon.

“We won’t really know until gameday. Whatever happens we’ll just adjust to it,” Vernon said. “Whoever got the one-on-one has got to finish and win their rush.”