Myles Garrett striving for greatness — as a player, for his team and with his body — and not worried about the pressure 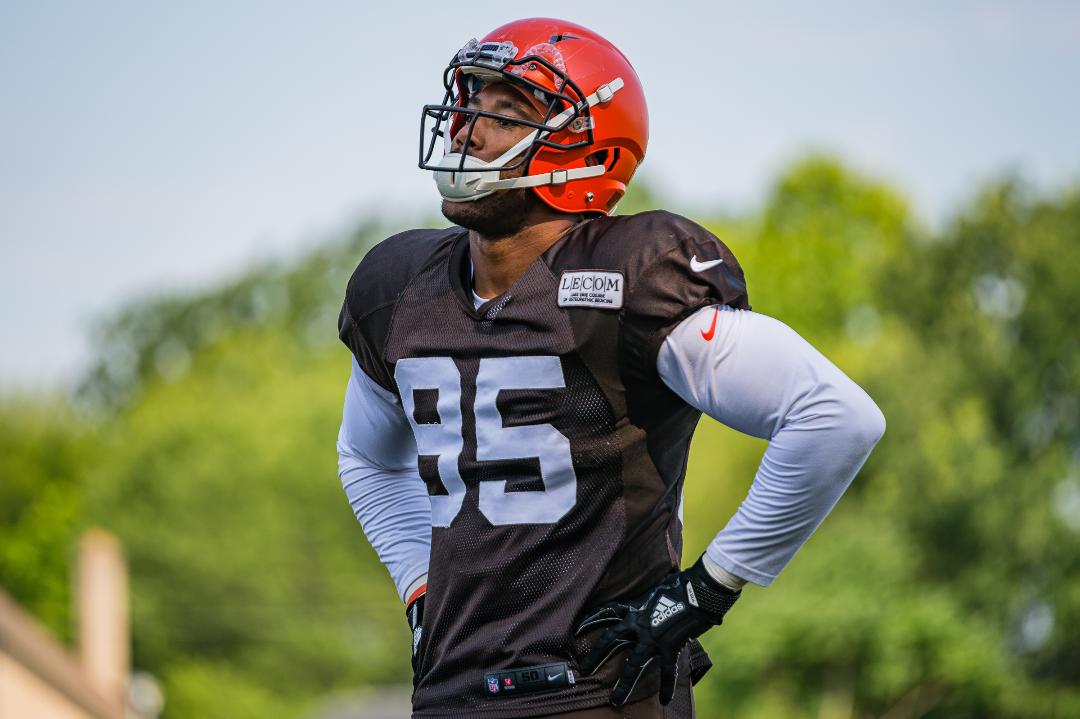 Not for a chiseled and motivated Myles Garrett.

“I mean, No. 1 pick, Defensive Player of the Year, I want to be the first lineman to be MVP,” the defensive end said Friday. “There’s a lot of pressure already. So Greek god’s the least of my troubles.”

Whether it’s on the field, as a nude model or in charity work, Garrett is hammering home a theme of greatness as he heads into his third year in the league.

“Same as in my first year, Defensive Player of the Year and best player on the field every time I walk out there,” he said of his personal goal. “That’s it.”

Garrett flashed elite ability in his first two years, totaling 20.5 sacks in 27 games, including 13.5 last year as he made the Pro Bowl and was named second-team All-Pro. But domination play in, play out and game in, game out eluded him.

He said effort wasn’t an issue, so he increased his film study, dropped 10 pounds and trained harder to build stamina. He turned up his drive to “relentless.”

“I’m only going to be able to play for so long, you never know when it’s going to be your last snap, last game, so you gotta make the most out of it,” he said as the greatest musical hits of the 1970s and ’80s played from his locker. “Hopefully I’ll be here for a long time. Hopefully I’ll be here in Cleveland for my whole career, but I want to make this my legacy and as big as possible. I want to make this team as great as it can be and hopefully win a lot of games and playoffs and championships.”

Garrett spoke to reporters in a long-sleeve orange shirt, brown shorts and slippers. He wore none of that during a photo shoot for ESPN The Magazine’s Body Issue released this week.

He posed nude at Joshua Tree National Park in the California desert, showing off his 6-foot-4, 262-pound mass of muscle, including a six-pack of abs rare for a man that big. In the accompanying interview he said he always wants to “look like a Grecian god.”

The idea to be in the magazine came from his mom.

“My mother birthed me, she knows I look good,” he said.

And wants to do good.

Garrett this week became the captain for Waterboys, an organization devoted to bringing clean water to East African communities in need.

“It’s something that I’m passionate about and something I’ve always wanted to do and have an impact with, so that was an easy decision for me,” he said.

Linebacker Christian Kirksey has been praising Garrett’s talent since he entered the league but notices a difference this year as they approach the opener Sunday against the Titans.

“He’s working extra hard. He’s finding his niche. He’s finding out that he can be one of the best players in the league,” Kirksey said. “It’s just good to see him coming into himself and understanding that.

“When you really, really, really look around and understand that you can be as dominant as you want, I think he’s starting to realize that. I’m just excited to see him go out there and be the best Myles can be.”

Freddie Kitchens said a perk of being the head coach is that he gets to form relationships with the whole roster.

“Here is what I like about Myles: He said he wants more production, he wants to be a better player. I want the same things for him,” he said. “I like the fact that he is willing to get coached to help him get there.

Garrett expressed his great expectations to fans in a letter Thursday in The Players’ Tribune, writing this is “shaping up to be one of those special seasons.” He didn’t feel he was stepping out on a limb.

“We’ve got a team with this kind of talent, we’ve stuck together through all this little circus that everybody’s drumming up, I think it has a recipe for greatness if you allow that, if you have that kind of mindset,” he said. “So I’m excited and I think the city’s with us, and when you have both those things together, there’s not many things that can come out of it except for greatness.”

The matchup with the Titans presents the potential for a staggering start for Garrett. Tennessee is without suspended left tackle Taylor Lewan, and right guard Kevin Pamphile didn’t practice Thursday and Friday and was listed as questionable on the injury report.

“It’s still a group that has some veteran guys, so you can’t sleep on them just because they’re not Taylor or first-string,” said Garrett, who expects to be chipped by running backs and tight ends at times and double-teamed others. “They have guys who have experience and know the grind. I’m not going to lower my intensity or my effort or my expectations just because Taylor’s not there.”