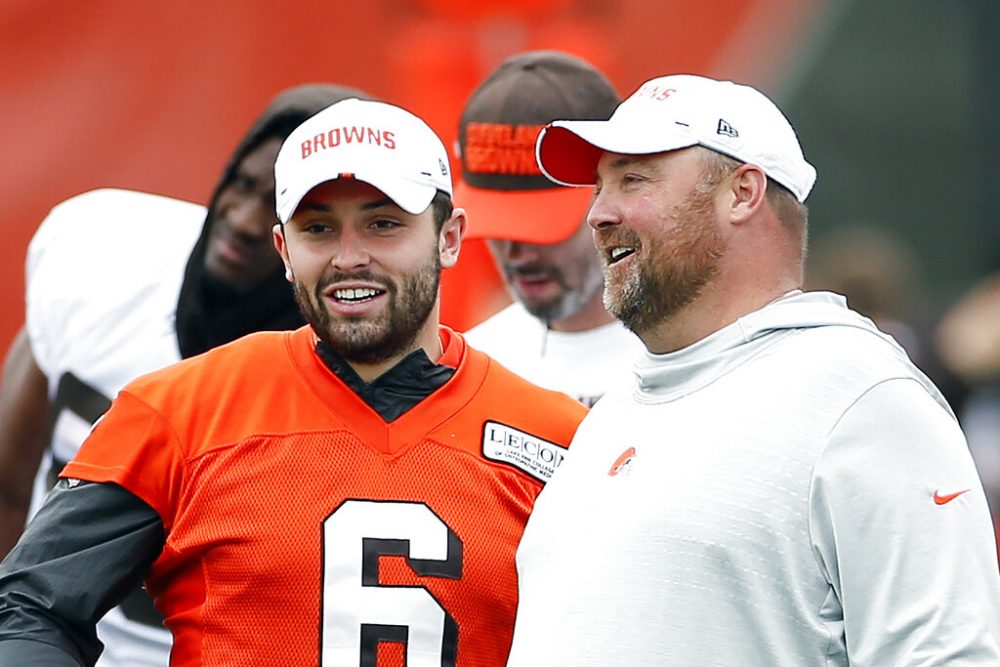 I’m feeling a bit out of my element as I venture into this annual experiment.

Entering my 16th year on the Browns beat, I believe only one time have I predicted a winning record. I could be wrong on that — I’m optimistic by nature, and choice.

But I’m certain that I’m usually scavenging for games that could some way, somehow become wins, then still end up stuck on 6-10. Of course, that’s been way too many wins way too many times, including the back-to-back 1-15 and 0-16 seasons in 2016 and ’17.

This year is different.

The Browns will be favored in several games. They’re the betting choice to win the AFC North for the first time — it was formed in 2002.

I have questions, which we’ll get to shortly. But I also have plenty of certainties.

The Browns are as talented as they’ve been since the runs to the AFC championship games in the 1980s. The 10-6 mirage of 2007 is the only team that comes close during my daily grind in Berea, but it was dominated by a few offensive players having career years — Derek Anderson, Braylon Edwards, Kellen Winslow.

The roster constructed by general manager John Dorsey is different. It’s loaded and built to last.

Baker Mayfield isn’t going anywhere anytime soon. Odell Beckham Jr. is a top-five receiver in the league and has already been to three Pro Bowls. Running back Nick Chubb might be the hardest worker on the team and is only in his second season.

Then there’s the defense, which might not be able to match the star power — end Myles Garrett would argue — but has better depth and no glaring weakness. If the Browns need the defense to win a game or two this season, it can.

But no NFL roster is perfect. And the Browns are only one season removed from 0-16. So here come the questions.

Is it asking too much to go from laughingstock to division champ that fast?

Is first-year coach Freddie Kitchens prepared for everything that comes with the job, including calling the offensive plays while managing the game and clock?

Will Mayfield make the jump in Year 2 necessary to become a top-10 quarterback?

Is the offensive line good enough to not sabotage the talent at the skill positions?

Will the rookie kicker come through in the clutch? How about the rookie punter?

Are they ready to overtake the Steelers and Ravens in the North?

We won’t know all the answers for months. We should get a sense shortly about Kitchens, Mayfield and the offensive line.

The Ravens are the defending division champs but third on the depth chart in Las Vegas. I love coach John Harbaugh but I’m not sold on quarterback Lamar Jackson.

The bigger concern for the Browns is a refocused Steelers team determined to prove it can win without Antonio Brown and Le’Veon Bell. Pittsburgh still has Ben Roethlisberger and plenty of talent and won’t roll over for the Browns.

In my Q-and-A with Browns safety Damarious Randall, he predicted a bunch of blowout wins and wondered why they couldn’t make a run at a perfect season. I love the confidence but don’t think it will be that easy.

I do think it will be a season to enjoy, and build upon.

I have the Browns going 10-6, including 4-2 in the North, which is enough to finally claim the division on a tiebreaker. I’ll even predict a playoff victory at home before being ousted in the second round by the Chiefs or Patriots.

I better get used to this kind of column. This is the new norm.

Ingraham: Why will the Browns win the division? Because it’s ‘Hammer’ time!
Browns Preview 2019: Wait ‘Til This Year!