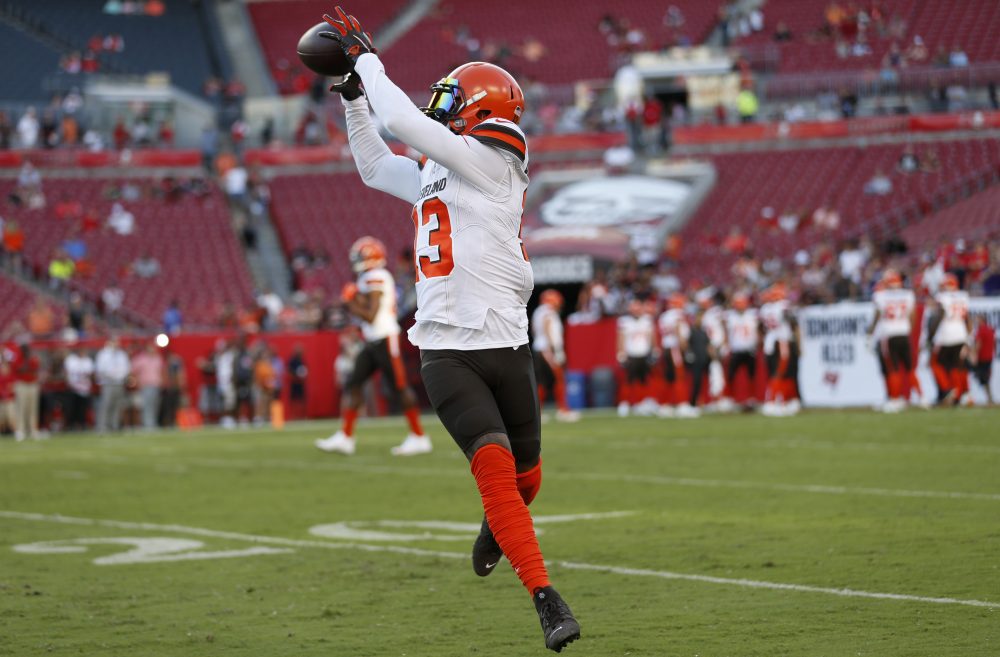 Odell Beckham Jr. may not be 100 percent, as he remains bothered by a hip injury. He may not have perfect chemistry with Baker Mayfield, because they’ve never played in a game together. He may be double-teamed by the Titans all day.

He’s still going to be fun to watch.

The Browns traded for the bona fide superstar receiver in March, and it’s been a long wait for Northeast Ohio to see him play. He provided glimpses of what to expect with daily highlights during training camp but saves his best work for the bright lights. His 390 catches in five years with the Giants are the most in NFL history in a player’s first 60 games, and he added 5,476 yards, a 14.0 average and 44 touchdowns.

The hip problem was thought to be behind him, but Beckham brought it up again Thursday. Perhaps he’s trying to give the Titans a false sense of security. Or maybe he’s giving himself an excuse if he doesn’t live up to the hype right off the bat. But if he’s close to 100 percent of his electrifying self, that should be good enough to transform the offense. He has four 1,000-yard seasons in five tries and at least three catches in every game but one. He produces.

The Browns will know right away if they’ve fixed their perennially porous run defense. After ranking 28th in the league last year under then-coordinator Gregg Williams, allowing 135.2 yards a game on the ground, they will open against a Titans run offense that was seventh with 126.4 yards.

Besides the coordinator change to Steve Wilks, the biggest additions were along the line with end Olivier Vernon and tackle Sheldon Richardson.

“That’s enough. That’s enough. Honestly,” Richardson said of why the run defense will be better. “Just staying together. One man can’t do it by himself. No heroes out there, playing sound-technique defense.”

The Titans offense relies on the run to take pressure off quarterback Marcus Mariota and set him up for play-action passes and shots downfield. Tennessee averaged 28.4 rushes a game last season, led by Derrick Henry, who rushed for 1,059 yards (seventh in the NFL), a 4.93 average and 12 touchdowns (tied for third). He’s a load at 6-foot-3, 247 pounds and requires multiple defenders to drag him down, but Richardson said the Titans run game gets mischaracterized.

“They’re more of a finesse team to me, I believe,” he said. “Not more so downhill like they claim to be, but they know how to get yards. They definitely know how to run the ball, but it’s just not an in-your-face type deal.”

Scatback Dion Lewis, who was with the Browns in 2013, is the alternative if Henry struggles after missing the preseason with a calf injury. Both will test the Browns to see if they’ve improved their tackling after struggles last year.

“We might miss tackles, but we’ve got a defense that’s going to swarm to the ball,” free safety Damarious Randall said. “So you might not notice them as much this year.”

Cleveland’s front four of Myles Garrett, Vernon, Richardson and Larry Ogunjobi will be difficult for any offensive line to handle. The Titans could have no chance without Pro Bowl left tackle Taylor Lewan, who’s suspended for violating the league’s policy on performance-enhancing drugs. He’ll be replaced by Dennis Kelly, a journeyman who’s spent most of his career at right tackle.

“We have been planning for Taylor not to be here for a few weeks now,” Vrabel said. “It is going to be a big challenge for us.”

Garrett expressed disappointment in missing the challenge of facing Lewan but might have a different outlook if he can get two or three sacks of Mariota. Garrett dominated during training camp and expects to blow past the 13.5 sacks he had last year, which ranked sixth in the league. Without Lewan, Garrett is certain to see extra bodies from the Titans in an attempt to slow him down.

“I am sure most teams throughout the league are going to look to try and help on Myles’ side and try to chip, which I think is going to open things up on the other side for Olivier Vernon, as well as an inside look for Larry and Sheldon,” Wilks said. “We feel like we are talented across the board and they are going to try to come in, particularly being depleted a little bit at the left tackle, try and protect a little bit more and give the quarterback time to get the ball down the field.”

Despite their run-heavy offense, the Titans allowed 47 sacks last year, including 42 of Mariota in 14 games. Vernon had seven sacks last year with the Giants, Ogunjobi 5.5 with the Browns and Richardson 4.5 with the Vikings.

“They can be how good they want to be,” Randall said of the line. “They’re a very, very talented group, and as long as we stay healthy across the board, we’re going to be a tough out each and every week.”

The skill position players need the brutes to do their jobs in order to get all the glory. The Browns are loaded with playmakers but have questions on the offensive line. Eric Kush was the winner of the right guard competition almost by default, and left tackle Greg Robinson didn’t duplicate his form from the second half of last season during the preseason.

The Titans present a challenge, especially with defensive tackle Jurrell Casey inside and Cameron Wake outside. Wake had 98 sacks in a decade with the Dolphins before signing with the Titans in the offseason, and Casey has had at least five sacks every year since 2013 and been to four straight Pro Bowls.

“They run a lot of different fronts and they have a lot of different pressures that they can bring towards you. A lot of line stunts,” right tackle Chris Hubbard said of the Titans. “Jurrell Casey, he’s the leader on that defense. He has that edge and he can definitely make plays when he wants to. He’s just one of those guys, elite player that you have to look after.”

Kush started seven games for the Bears last year so he has experience and shouldn’t be overwhelmed in the starting role. He knows he must perform after the Browns traded for two guards last week. Robinson is extremely talented but can lack focus. The Browns need his best so Mayfield has time to find his constellation of stars.

“I’m excited, I have a lot of confidence in those guys,” running back Nick Chubb said. “All the guys up front, very experienced, talented, a lot of great chemistry between them and I look forward to running behind them.”

The Browns overhauled the special teams in the offseason, starting with the hiring of veteran coordinator Mike Priefer. He is an instant upgrade over Amos Jones, has been given extra practice time by first-year coach Freddie Kitchens and expects all the special teams units to make a jump.

“I do know that we do have great attention to detail with our head coach and our personnel department about the importance of special teams and how it can help us win games,” Priefer said. “Hopefully we can carry that baton and be great on teams in every phase.”

The Browns have questions at the two most visible spots, with rookie kicker Austin Seibert and rookie punter Jamie Gillan. Seibert struggled for much of camp before finishing the preseason with eight straight makes, while Gillan is still raw, inconsistent and inexperienced as a holder.

The coverage units can’t be much worse than last year but will be tested out of the gate by Tennessee returner Darius Jennings. He averaged a franchise-best 31.7 yards last year as the team finished at 32.0 a kickoff return, the highest mark in NFL history.

Browns players who had at least one takeaway last season, as the team totaled 31

Baker Mayfield’s passer rating in the red zone last year, second in the NFL behind the 118.5 of New Orleans’ Drew Brees

Catches by receiver Jarvis Landry, most in NFL history in a player’s first five years

The prediction: Browns 27, Titans 17
Titans 43, Browns 13: The breakdown — thumbs up, thumbs down, the matchups