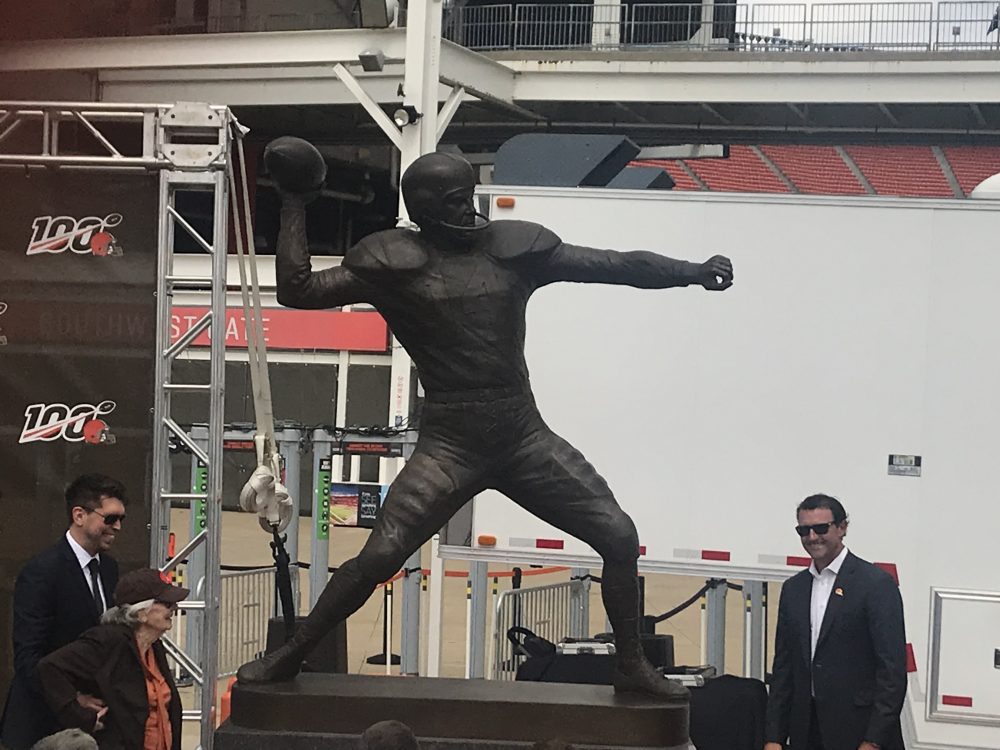 CLEVELAND — His name was on the back of jerseys worn by his great-grandchildren and adult fans in the crowd.

His DNA was obvious in the face of Ryan Van Name, the grandson picked to speak for the family, which had 39 members in attendance.

His Hall of Fame talent was shown in black-and-white highlights on a giant video board.

Even before the 7-foot, 6-inch, 1,000-pound bronze statue of him prepared to throw a pass was unveiled outside the southwest corner of FirstEnergy Stadium, Otto Graham was everywhere Saturday.

“He is in heaven looking down upon us today, and he is amazed,” said Beverly Graham, his 95-year-old widow who wore a Browns ballcap and blazer.

The Graham statue is only hundreds of yards west of one commemorating Jim Brown, who sat in the front row Saturday. Graham played from 1946-55, so he never handed off to Brown, the Hall of Fame running back. But they are linked as legends from a time when the Browns were the best in football.

Graham, who died in 2003 at 82 years old, didn’t miss a game in his 10 years — or a championship game. He won seven titles — four in the All-American Football Conference, three in the NFL — in 10 appearances and made five Pro Bowls. He retired after winning championship No. 7.

“It is a little frightening thinking about that far in the future when you are 95 years old,” joked Beverly, who lives in Sarasota, Fla. “It is such an honor. I know it never would have entered Otto’s mind ever that something like this would be done.”

The statue was done by David L. Deming, who also did the one of Brown and those of the Indians Hall of Famers outside Progressive Field.

Hundreds of fans turned out to remember Graham and express their appreciation. David Graham, Otto’s son, returned the gratitude by shaking hands with many in the crowd.

“The city has taken us in as family,” Van Name said. “It really is special for all of us.”

The family and fans were joined by Browns alumni, including Bernie Kosar.

Van Name said his grandma started to cry when the orange covering was removed, then wanted to get a look at the statue’s face.

“It is exciting to look around right now and see all the Cleveland fans that have come to see it, too,” she said. “I am just so happy about it and that Otto is remembered.”

Odell Beckham Jr. says he’s been afraid to run at full speed because of injury, remains confident heading into opener
Baker Mayfield takes beating in loss and leaves with right wrist taped, but promises team will bounce back after outsiders “throw us in trash”