Baker Mayfield takes beating in loss and leaves with right wrist taped, but promises team will bounce back after outsiders “throw us in trash” 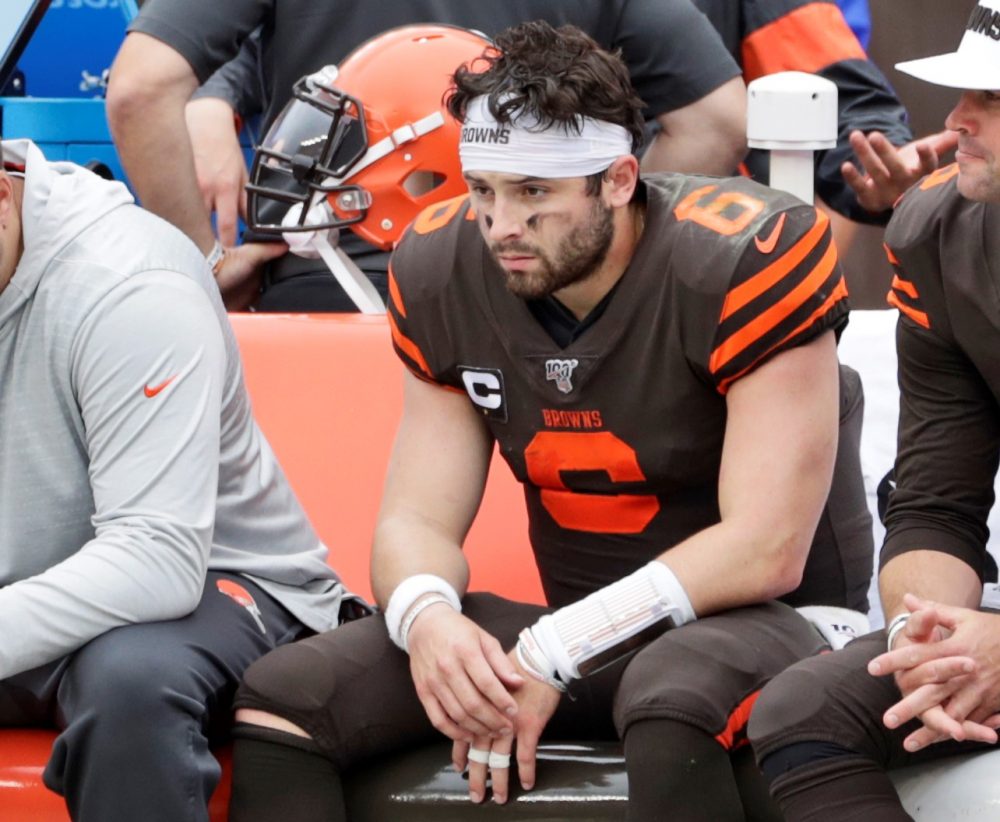 He was hit numerous others.

He was slow to get up on multiple occasions.

Mayfield finished the 43-13 season-opening loss to the Tennessee Titans on Sunday but left FirstEnergy Stadium with his right wrist and thumb wrapped. He had X-rays at the stadium and the team said they were negative.

Mayfield feels the same way about his team. The critics will be all over the Browns after they failed so miserably in an attempt to justify the offseason hype, but the two-time walk-on considers himself the ultimate underdog and feeds on the doubt of others.

He’s confident the Browns have the resilience to bounce back from the beat-down.

“Because everybody is going to throw us in the trash. I think that is good,” he said. “I know what type of men we have in this locker room. Quite frankly, I do not give a damn what happens on the outside. I know how we are going to react. I know what we are going to do. We are going to bounce back.

“We have a Monday Night game coming up so we do not really care. We are ready to go.”

In order to beat the Jets in New Jersey next Monday, the Browns need to be better in several areas on offense.

Too many drives were sabotaged by penalties, as they faced first-and-20 and third-and-15 regularly. The protection was poor from the start, and only got worse once left tackle Greg Robinson was ejected for kicking Titans safety Kenny Vaccaro in the head. Mayfield didn’t have his usual accuracy, especially after the hits piled up.

The final interception was a pick-six by cornerback Malcolm Butler for the final score. The pass was behind receiver Jarvis Landry.

“I think once you have one mistake and then you are pressing late in the game, it compounds and it hurts us,” Mayfield said. “I have to take care of the ball. Eliminate negative plays.”

Mayfield made his first start in a season opener, and Freddie Kitchens made his debut as a head coach. They didn’t look as good together as they did over the final eight games a year ago, when the Browns went 5-3 and Kitchens earned the head coaching job with his performance as the offensive coordinator.

Another opening debacle, as Cleveland crushed in Kitchens’ debut

After a touchdown drive to open the game, the Browns scored one more time — a 3-yard pass to tight end David Njoku set up by two deep completions to Landry — and didn’t get past the Titans 40-yard line otherwise. They were 0-for-6 on third-down conversions to start the game and finished 1-for-10.

Kitchens thought the overall frustration of a difficult day contributed to Mayfield’s struggles in the fourth quarter.

“I am sure it did,” he said. “Once they start pinning their ears back, it becomes tough sledding and then the windows get more and more tight and then they make a couple plays. Baker will be fine.”

Mayfield, who is 6-8 as a starter, connected with new receiver Odell Beckham Jr. seven times on 11 targets for 71 yards — all team highs. The first interception, by safety Kevin Byard, came on a deep in route by Beckham with 14:11 left in the fourth quarter and the Browns trailing 22-13.

“It was just a bad throw,” Mayfield said. “Just a terrible throw. He was at the right depth, right place. Bad throw.”

Beckham didn’t want to overreact to one loss and liked what he saw from his new quarterback.

“He was good. I think from Baker this year you’ll see a lot of growth and maturity,” Beckham said. “He’s the captain of this team now, he’s going to lead us. We have other guys that have to step up and lead, as well.

“He never got down, he never got out of himself, he just stuck to the plan and tried to make plays when he could.”

Mayfield got up holding his wrist after being sacked in the end zone by outside linebacker Cameron Wake for a safety with 1:42 left in the first half. Right tackle Chris Hubbard was beat, and Mayfield was hit as he was preparing to throw as Wake recorded the 100th sack of his career.

The shots didn’t stop, as the Titans were able to come after Mayfield with a big lead and Cleveland’s offensive line short-handed. He said the Browns can’t afford to blink.

“We just need to rally together. Don’t flinch,” he said. “It is Game 1 of a long season. To get to where we want to go, you are going to have bumps in the road. How to react to it, we are going to come together. We are going to push forward.

“We are not going to let it define us and let’s see what type of men we have in this locker room. I am pretty sure I have a good idea about it.”