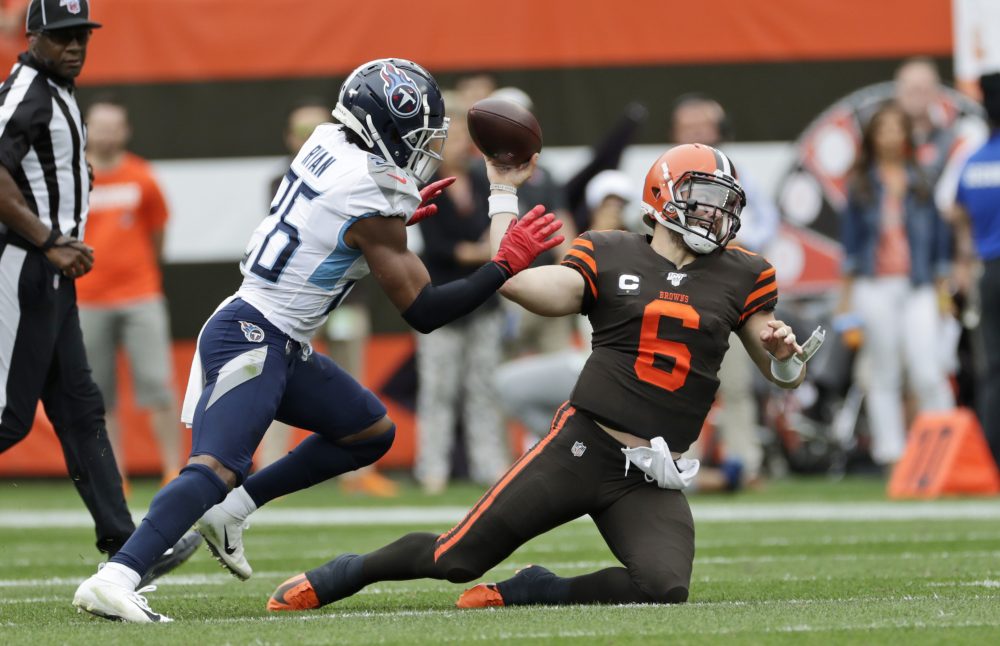 CLEVELAND — The Browns walked off the field to boos from a mostly empty FirstEnergy Stadium. The cheers had long ago made the transition to silence, groans and gasps, and the players’ puffed-out chests had become slumped shoulders as the Titans pounded them into submission.

The stunning 43-13 loss to the Tennessee Titans on Sunday felt like so many other season-opening debacles, as the Browns fell to 1-19-1 in Week 1 since returning to the NFL in 1999.

Except this one was supposed to be so different, which is why it may have been the toughest to take for fans. By margin, it was the worst since 43-0 to the Steelers in 1999. But that was an expansion roster. This is a team loaded with stars, favored by a touchdown and expected to contend for the playoffs.

All the excitement of the last six months turned into embarrassment. The debut of coach Freddie Kitchens and receiver Odell Beckham Jr. was one to forget after a memorable offseason.

“This only counts as one game. The world is not ending today, contrary to popular belief,” Kitchens said. “Everyone is going to keep believing in the locker room. That is the only thing that matters.”

Kitchens is the latest Browns coach to learn that honeymoons end early on the lakefront. The Titans had a strong game plan under second-year coach Mike Vrabel and kept their emotions in check as the Browns were combusting.

The flags came on offense with holds and false starts. On defense were roughing the passers, a personal foul on end Myles Garrett for striking tight end Delanie Walker in the helmet after a play and an untimely neutral zone infraction on tackle Sheldon Richardson, who had one of the late hits on quarterback Marcus Mariota.

The most egregious penalty came when left tackle Greg Robinson was ejected for kicking Titans safety Kenny Vaccaro in the head after a play.

“I did not see that coming,” Kitchens said. “That is not how we practiced. That is just as much the coaches’ fault, my fault, players’ faults. Everybody takes some blame for that.”

“We have to keep our composure,” said Vrabel, who grew up in Akron and starred at Ohio State. “We know that you can’t kick players. You can’t throw punches. We practice that every day.”

The Browns put most of the blame for the loss on the penalties but made plenty of other mistakes.

Baker Mayfield threw three interceptions in the fourth quarter. The defense gave up a 75-yard touchdown on a screen pass on the first play after cutting the deficit to 15-13 with 2:10 left in the third quarter. The tight ends dropped three passes. Rookie kicker Austin Seibert missed an extra point after a touchdown on the opening drive.

“Whether we lost by one point or 40 points, it still says an ‘L’ on the record,” said Beckham, who had seven catches in 11 targets for 71 yards. “There’s nothing to panic about. Adversity has to come at some point in the season. Why not be right now?”

The Browns may have brought the trouncing upon themselves. Not only have they been hyped up by the media since adding Beckham and other key players in the offseason, they’ve openly talked about winning the Super Bowl.

The Titans were listening.

“They were who we thought they were, if you want to crown them, crown them,” said Walker, using an old rant by former Cardinals coach Dennis Green. “That fueled us. It’s so funny. That’s what we do in this league. We hype teams.

Cornerback Malcolm Butler ended the scoring by returning a Mayfield interception 38 yards for a touchdown. He mentioned a Mayfield quote from the week in which he said Browns skill position players should be licking their chops when they get one-on-one matchups.

“We’re NFL players. We’re supposed to be confident, but sometimes it just don’t add up,” Butler said. “You’ve got to be about that action instead of talking. Hype is nothing, we proved that today.

“Everybody’s going to look at you a different way when you say you’re $500 but you’re really $100. You’re not living up to what you say you are.”

Mayfield, who finished 25-for-38 for 285 yards, a touchdown, three interceptions and a 64.0 rating, said the expectations didn’t affect the way he felt about the result.

“A loss is always disappointing,” he said. “I do not really care what is going on on the outside. We lost and we expected to win.”

The Browns can begin to prove they’re not the same old Browns by bouncing back with a Week 2 victory Monday night against the Jets in New Jersey. The pressure is on.

“We’ll be OK. We have a lot of veterans up in this room,” safety Damarious Randall said. “That was definitely a punch in the mouth, but that’s probably what we needed. We’ll definitely be OK.”

Baker Mayfield takes beating in loss and leaves with right wrist taped, but promises team will bounce back after outsiders “throw us in trash”
Defensive line fails to dominate against depleted Titans line, contributes to dysfunction in ugly defeat