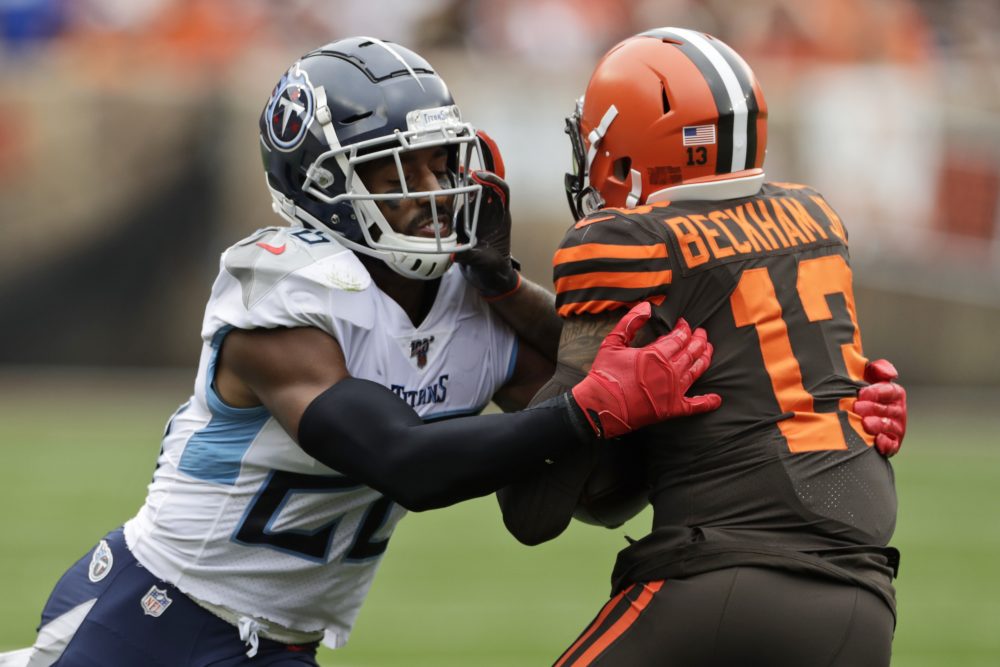 CLEVELAND — Odell Beckham Jr. was the Browns’ biggest offseason acquisition and one of the major reasons for excitement surrounding the season opener Sunday against the Tennessee Titans.

Beckham didn’t disappoint, hauling in seven passes for 71 yards and showing off his great hands, speed and shiftiness once he has the ball.

“It was amazing,” Beckham said of his Browns debut. “It was not the result we wanted, but it was amazing to step on the field, come off injury free. For those fans, we don’t want to see them leaving with nine minutes left in the (fourth) quarter. We want to be able to stick there and fight through it. I know there’s been losing around here, but that’s not what we’re here to do.”

Quarterback Baker Mayfield hit Beckham on back-to-back plays during the opening drive – the second completion erased when left tackle Greg Robinson was called for an illegal blindside block – and for a 24-yard gain in the final minute of the first half.

One play later they connected for a 22-yard gain to the Tennessee 20-yard line, but Beckham was called for offensive pass interference. The drive stalled and the Browns came away with no points.

Whether Beckham would be able to make the plays came into question earlier in the week when he revealed he had suffered a hip injury. But he showed no signs of discomfort during the game.

“I told you one the lights come on and the stadium fills up, you feel different,” he said. “It’s something I’m going to continue to work on throughout the season. Just keep progressing, keep getting better.”

The postgame reaction focused on the Browns’ 18 penalties. Cleveland was called for offsides, roughing the passer, holding and unnecessary roughness among other infractions.

“Too many flags on the field. Too much laundry,” defensive end Devaroe Lawrence said. “We’ve got goals, but getting all those penalties, that’s not going to help us reach our goals.”

Lawrence was hit with the team’s final flag for unsportsmanlike conduct after Tennessee’s Malcolm Butler returned an interception for a touchdown to make it 43-13.

Lawrence claims the official said, “Watch where the f— you’re going,” to which Lawrence responded, “F— you.”

Running back Dontrell Hillard, who scored a touchdown on his first NFL rushing attempt on the opening drive, left with a concussion and left tackle Kendall Lamm left with a knee injury.

Mayfield suffered a wrist injury during the game but postgame X-rays were negative.

The Browns had a few minor surprises on their inactives list.

Defensive end Chad Thomas was active, while Genard Avery was inactive. As rookies last year Avery had 4.5 sacks in 16 games and Thomas didn’t register a stat in four games.

The Browns added two new receivers last weekend, and KhaDarel Hodge was active while Taywan Taylor wasn’t. Taylor was acquired in a trade with the Titans.

Rookie cornerback Greedy Williams, a second-round pick out of LSU, started ahead of veteran Terrance Mitchell. He joined No. 1 corner Denzel Ward.

Mitchell had been with the first-team defense for the last couple of weeks of training camp, but Williams moved up during the Week 1 practice week. Mitchell also played Sunday, including opening the second half before Williams returned.

ESPN reported the Browns were among the teams interested in signing controversial receiver Antonio Brown before he signed with the Patriots on Saturday.

** The Browns marched 88 yards on their opening drive to score a touchdown, the first time the team has reached the end zone on the first drive of the season since 1995.