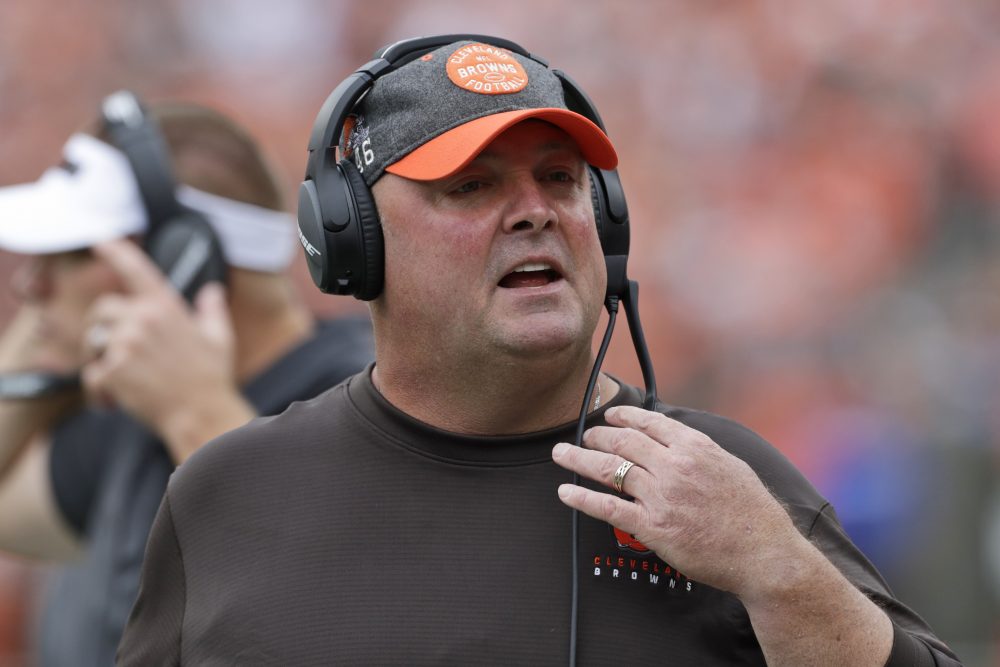 What’s the record for worst season-opening game ever by a team that went to the Super Bowl?

(Asking for a friend).

As egg-laying train wrecks go, this one will do until something uglier comes along. What, in the name of Hue Jackson, was THAT?

By the middle of the fourth quarter the joint was half-empty. You know, just like the 0-16 season.

Perhaps he should have. You don’t just blow off the preseason schedule by hardly playing any of your regulars, particularly the mostly-new-to-each-other playmakers on offense, then hit the light switch on opening day and expect pristine Patriots-eque execution.

Instead, what the Browns gave the paying customers was a heavy dose of chaos, sprinkled with a touch of disorganization, a pinch of preposterousness, presented on a serving tray of — cue Charles Barkley — turrible.

They were like termites eating their way through whatever organizational underpinning the Browns thought they brought into the game. They were their own worst enemy. They continuously shot themselves in the foot, the leg, the thigh and the shoulder.

Only the end of the game prevented the Browns from posting that rarest of rarities: a 20-penalty game. That’s right, 20.

Instead, they had to settle for a whopping 18 penalties for an unfathomable 182 yards, making the game unwatchable and unwinnable.

The Browns had more penalty yards than rushing yards, and it wasn’t even close (182-102). But let’s give credit where credit is due. The renegade Browns borrowed from every page in the NFL rule book.

There were five offensive holding penalties, three defensive holdings and one each of the following: unsportsmanlike conduct, unnecessary roughness (as opposed to necessary roughness), neutral zone infraction, false start, offensive pass interference, illegal use of the hands and the surefire way to be told to leave the premises — so long, Greg Robinson! — kicking an opposing player in the head.

“We do not tolerate that. That is unacceptable,” said Kitchens.

“You want them to be excited about the first game. We just have to use our discipline and keep our composure,” said Kitchens, whose players didn’t.

“We will address it and we will get it fixed,” said quarterback Baker Mayfield, who led the offense on a rousing eight-play, 73-yard touchdown drive on its first possession of the game, giving the Browns an early lead that quickly vanished amidst the officials’ fluttering laundry.

The Titans took the lead on an 87-yard touchdown drive in the second quarter which included four first downs on Browns penalties. That’s when the rout began, and the disorganized Browns could do nothing to stop it.

Mayfield had a horrendous day, throwing three interceptions and being sacked five times, the latter being a reflection of the most alarming conclusion to be drawn from the train wreck: the Browns’ offensive line is not a work in progress, it’s an open wound in progress.

Six of the 18 penalties were on the offensive line. Injuries and an ejection hurt, but the line was leaky and suspect even before the injuries and ejection.

After the opening touchdown drive, the Browns were a disorganized, undisciplined mess. Certainly nothing close to what they were supposed to be, which was the NFL’s sexiest, most compelling, most talked-about team.

“I think everybody just needs to be more disciplined,” Mayfield said. “Everybody knows what the problem is. We will see it. We will see if it’s bad technique or what. Dumb penalties, hurting ourselves. Then, obviously, turnovers on my part. Just dumb stuff.”

That’s the perfect epitaph for the Browns’ train wreck opener: A 30-point loss, thanks to just dumb stuff.