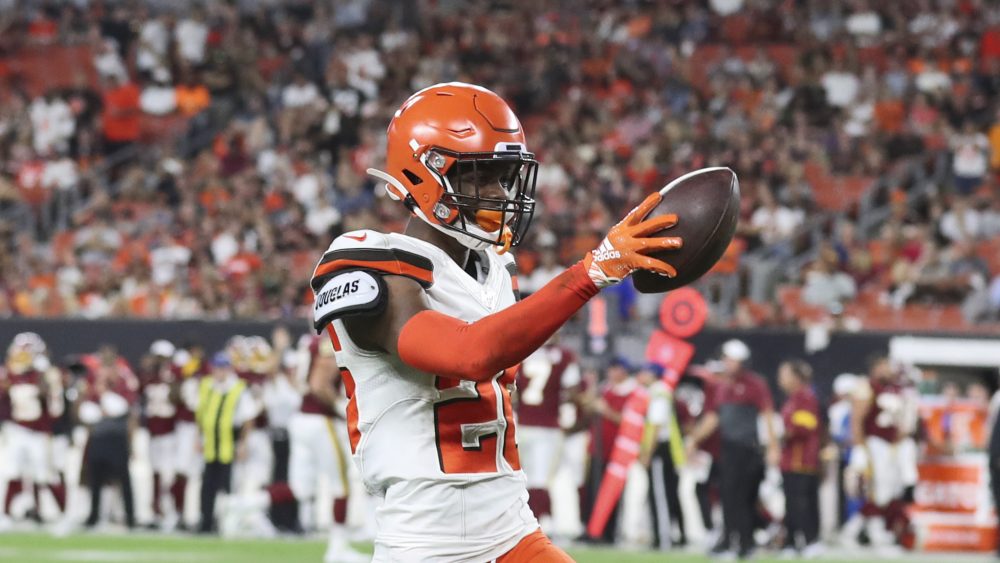 BEREA — Even when he was stuck on the second team, rookie cornerback Greedy Williams said he put his head down, kept his mouth shut and continued working.

He was rewarded with a starting assignment in his first NFL game.

Williams, a second-round pick out of LSU, started ahead of veteran Terrance Mitchell on Sunday during the 43-13 loss to the Titans. Williams played 40 of 61 defensive snaps (66 percent) and Mitchell played 18.

“I thought Greedy played pretty good,” coach Freddie Kitchens said Monday. “He had a penalty on special teams as a gunner, but overall I thought Greedy challenged the wide receivers and competed every play. I thought he did well.”

Williams said he was told the Monday before the opener he’d be starting. It was a surprise to some because Mitchell had been in the starting role opposite Denzel Ward for a couple of weeks and had received praise from the coaching staff.

“I knew on Monday, but I just did what I did, just kept my mouth shut and put my best foot forward at practice,” said Williams, who didn’t lose sight of his goal of starting. “I just stayed forward. I never let anything get me down. I just practiced hard every day, competed every day. Just trust in what I do and great things come.”

Williams (6-foot-2, 185 pounds) was credited with two tackles. He allowed a 16-yard completion to tight end Delanie Walker and had good coverage on an incompletion toward receiver A.J. Brown in the end zone. The penalty was for holding on a punt return.

“Just getting my feet wet, just trying to do everything right, be perfect,” Williams said of his first game. “At the end of the day, just out there playing football.”

“Anytime you graduate to the next level and it’s your first game, you’re nervous,” he said. “You just plan not to mess up.”

Mitchell had a tackle and a pass defensed, but was beat for a completion to start the second half. Brown was open an a crossing route, then stiff-armed Mitchell to the ground for a 51-yard catch-and-run.

Williams said he’s fine with the rotation if that’s what the coaches decide.

“If that’s going to help us win games, I’m all for it,” he said. “Me and Mitch, we bond together. We teach each other a lot of things.”

Defensive tackle Devaroe Lawrence is subject to a fine after an unsportsmanlike conduct penalty following the game’s final extra point. He told The Chronicle-Telegram after the game he swore at an official after the official had cursed at him.

Lawrence said the official said, “Watch where the f— you’re going,” and he replied, “F— you.”

The league’s fine schedule says a player can be docked $28,075 for a verbal or non-physical offense against an official. Lawrence told reporters he plans to appeal if fined.

The Browns begin practice Tuesday for the Monday night game against the Jets, and Kitchens expects quarterback Baker Mayfield to participate. X-rays on Mayfield’s right hand after the game were negative, but he left the stadium with his right wrist and thumb wrapped.

“I don’t expect him to (miss any practice time),” Kitchens said. “We’re just now on the day after the game, so we’ll have to see how he feels. But I’m pretty sure he’ll be fine.

“I can’t say anything definitive right now as far as missing practice time, but I’m pretty certain he’ll be fine.”

Mayfield takes beating but promises he and team will bounce back

Mayfield went 25-for-38 for 285 yards, a touchdown, three fourth-quarter interceptions and a 64.0 rating.

“I do not think he was terribly sharp yesterday,” Kitchens said. “I have to do a better job of putting him in better situations. A lot of that falls on me.”

Mayfield was sacked five times, including in the end zone for a safety.

“It looks bad on us as a unit and also it hurts our QB’s confidence,” left tackle Greg Robinson said. “So at this point moving forward I feel like Baker should have no doubt that we have his back and we’re going to try to keep him upright as much as possible.”

The Browns had questions on the offensive line even before Robinson was ejected, replacement Kendall Lamm was hurt and they had to shuffle the line. Kitchens said the blame doesn’t fall only on the line, with the running backs, tight ends and quarterback playing a role in protection.

He acknowledged he can also help as the play caller.

Mayfield can also help himself. Kitchens said he held onto the ball too long.

“He will continue to get better with his eyes, and the ball will start coming out quicker,” he said.

** Rookie Austin Seibert missed the first extra point and made the second.

“Eventually missed PATs hurt you,” Kitchens said. “His job is to make the kicks. He understands that. He is going to work to get better.”

** Defensive end Olivier Vernon played 56 snaps (92 percent of the 61 on defense) and wasn’t credited with a stat in the official gamebook.