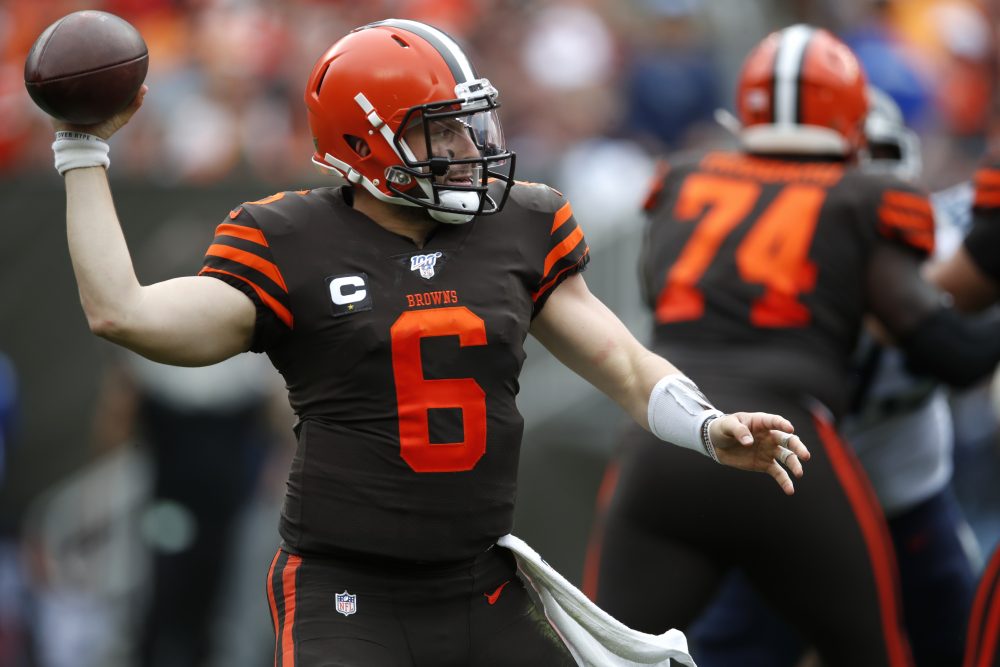 Baker Mayfield didn’t have a wrap on his right hand and looked good throwing the ball Tuesday morning at practice.

Mayfield was sacked five times Sunday in the 43-13 loss to the Titans, X-rays after the game were negative and he left FirstEnergy Stadium with his right wrist and thumb wrapped.

Mayfield  promises team will rebound after outsiders “throw us in trash”

“I’ll be all right,” Mayfield said after the game.

Linebacker Adarius Taylor will likely miss at least a couple of games after suffering a high ankle sprain against the Titans.

“I do not know the full timetable,” Kitchens said. “He is a quick healer.”

Taylor, signed as a free agent in March, played three snaps on defense and 21 on special teams Sunday. He’s the No. 3 linebacker on the depth chart, but the Titans played a lot with two tight ends and the Browns countered with three safeties. Taylor’s absence will likely mean more time for one of the rookie linebackers, Sione Takitaki or Mack Wilson.

** Kendall Lamm, the top backup tackle, will miss time after injuring a knee Sunday. Kitchens said he didn’t know how long, but the team will likely have to make an addition to the roster.

** Free safety Damarious Randall didn’t practice because he has a stomach virus.

Higgins said he got rolled into while blocking and tried to return but was hurting. He said he’ll “most definitely” play against the Jets.

A Browns fan will be banned indefinitely from FirstEnergy Stadium after spraying a beer at Titans players, including in the face of cornerback Logan Ryan.

“This individual person’s action is not tolerated in our building as it is not reflective of our fan base or city,” a Browns spokesman said in a statement. “We are currently addressing the situation internally, along with NFL Security, and we believe we have identified the person involved. He will ultimately face an indefinite ban from FirstEnergy Stadium for the unacceptable behavior, which is in clear violation of our Fan Code of Conduct.”

Titans cornerback Malcolm Butler ran through the end zone after an interception return for a touchdown and jumped against the wall, hanging over into the first row of the Dawg Pound. The fan sprayed beer at Butler and the teammates who joined him.

They can pour beer on us because we’re just athletes right? We’re just entertainment & since they purchased a ticket they can act how they want? 👀 @NFL @NFLPA @Browns @Titans https://t.co/fpCfEOhC1V

“They can pour beer on us because we’re just athletes right?” Ryan tweeted. “We’re just entertainment & since they purchased a ticket they can act how they want? @NFL @NFLPA @Browns @Titans”

Kitchens hasn’t overhauled his offensive system this week in anticipation of the matchup with Jets defensive coordinator Gregg Williams, who held the same role with the Browns the last two years and was the interim coach for the final eight games in 2018.

“No, I have not changed anything. Not yet. I probably won’t,” Kitchens said. “He has the same thing to answer — I am just kidding.”

Williams interviewed for the head coaching job that went to Kitchens.

“Gregg, he’s going to come out passionate with a message to prove, so we’ve got something to prove, as well,” Higgins said.

“Anytime you get a group of people and guys to believe in you and believe in what you are doing, it is always special. We were able to do that,” Kitchens said. “I respect the hell out of Gregg. I think Gregg is one of the best coaches in the National Football League and has been for a long time. I can’t say enough good things about Gregg.”

The Browns used receiver Jarvis Landry as a punt returner Sunday after Hilliard left the game with a concussion. Landry had one fair catch and gestured at punter Brett Kern to kick it to him after he angled one out of bounds.

Kitchens isn’t worried about Landry getting hurt in the extra role.

“No. Jarvis is the definition of a football player,” he said. “It does not make me nervous at all. It actually makes me very calm and has a calming effect that he is back there fielding the ball.”

Kitchens said Landry could get the chance again vs. the Jets.

“I thought he held his own in there,” Kitchens said. “He matched up against a pretty good player for the most part all day, and I thought he played well.”

** Tight end Rico Gathers was waived. He had been suspended by the league for Week 1.

** Rookie cornerback Donnie Lewis Jr., a seventh-round pick, was signed to the practice squad over the weekend.