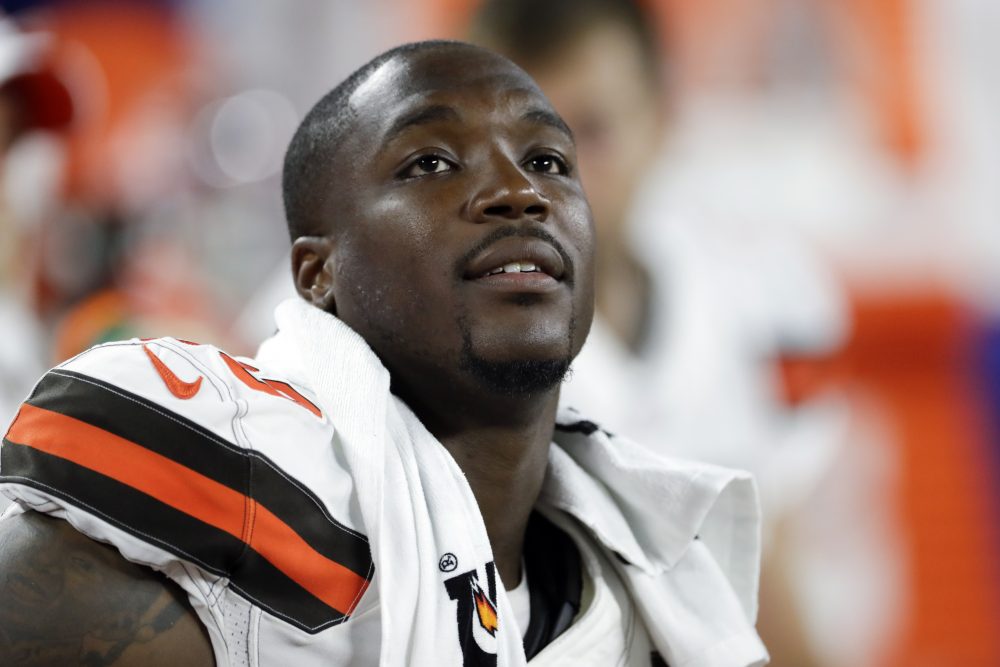 Hours earlier Smith had watched his girlfriend, Petara Cordero, get killed in a traffic accident less than a month after having their baby girl, Haven Harris Smith. His teammates did all they could: be there for him.

“You could just see it on him, it’s taken a toll on him. Because it happened right in front of him,” fellow defensive end Chad Thomas said Thursday. “So us just being there for him and just coming and just sitting around him while he’s in his bed. Just sitting there, just chilling with him, that just comforted him a little bit. Just let him know that we’re there for him, that he’s got brothers outside of his family.”

The Browns returned to the practice field Thursday morning with heavy hearts and their minds on Smith.

Cordero, 26, was killed early Wednesday morning when she was struck by a car as she stood on the shoulder of I-90 west after Smith’s car had a tire blow out. The 47-year-old woman who hit Cordero told police she had been drinking.

“You ain’t got no response, it’s a tragedy,” said defensive tackle Devaroe Lawrence, who spent all day with Smith on Wednesday. “I don’t just do locker room Chris, I do Chris outside of the locker room, so that’s like a brother to me. I knew her personally, so it’s just a tragedy.”

Lawrence knows the team’s support goes only so far.

“It’s not going to help because it ain’t going to replace her at the end of the day,” he said. “There’s no replacements, ain’t no way to make it easy, you’ve just got to let time take its course because that’s going to be his best healer.”

Coach Freddie Kitchens also visited Smith at his home Wednesday and informed the players during a meeting on their day off. Kitchens said that’s one of the most difficult things he’s had to do as a coach.

“Helluva lot harder than the games,” he said. “The reason it’s so hard is because of the locker room we’ve created. We’ve tried to build a locker room where guys care about each other, they get you through tough times, and it’s not going to get any tougher than that.”

The players were struggling Thursday.

“That was a real punch in the gut,” left guard Joel Bitonio said. “The whole team is thinking about him every chance we get. That’s one of our brothers. To be in that situation, I couldn’t put myself in that situation.”

Bitonio and his wife have a baby girl, so the tragedy hit close to home.

“I can’t put it into words,” he said. “It’s hard for me to truly accept and understand what’s going on for him. I just know how tough it would be for me to be in that situation right now. I’m just really, really praying for him.”

Smith’s family and Cordero’s family flew into town, and the team is trying to help everyone involved.

“Just laying steps in place just to make sure him and has family and the people don’t have to worry about getting food, babysitting, the nanny, all that stuff and just offer emotional support in whatever way you can,” linebacker Joe Schobert said.

Smith, who wasn’t injured in the accidents, wasn’t at practice and Kitchens said he told him not to think about football. The Browns play at the New York Jets on Monday night.

“I can’t say one way or the other on that,” Kitchens said when asked if Smith would play. “I know from an emotional standpoint, we’re going to support Chris. I have not even given one thought about that and I don’t want Chris to even think about that.”

Smith is a locker room favorite.

“Chris is one of those guys — his smile is infectious, his personality is infectious. He’s just overall well-liked,” Kitchens said. “Of course, everybody in that locker room’s hurting for him.

“This goes beyond football. This was a 26-year-old young lady at the highlight of her life. Chris is a good dude. She was a good girl.”

“Chris Smith is a leader for us,” free safety Damarious Randall said. “He’s definitely a guy that brings joy around the locker room, happy guy. Just wish him and his family the best. This one definitely is for Chris.”

Kitchens said the bond formed inside a locker room is valuable when tragedy strikes.

Receiver Odell Beckham Jr. said the team must come together in the tough time.