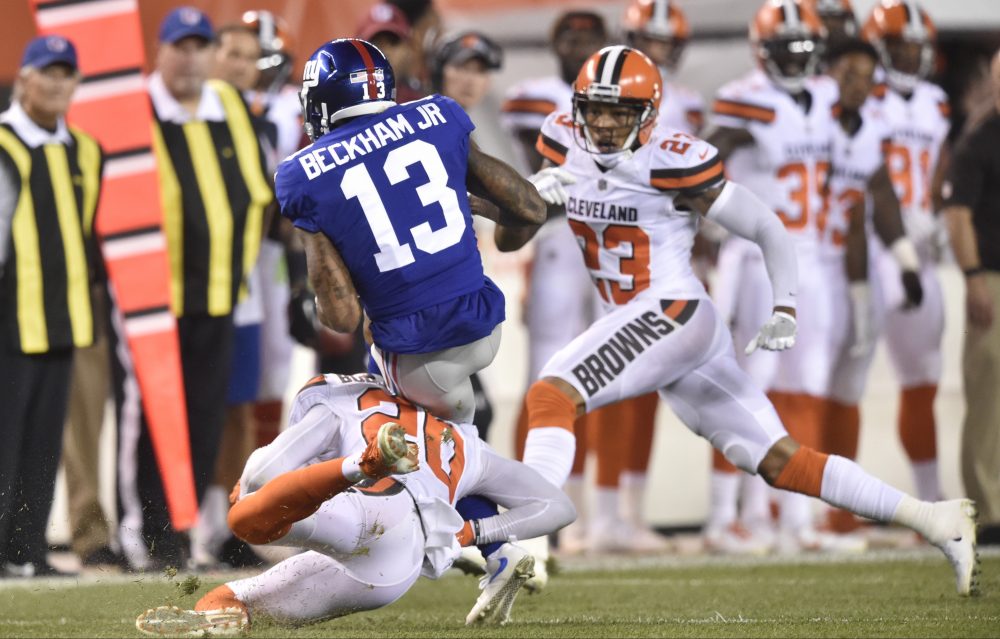 The Browns receiver believes his recent string of injuries started with a high ankle sprain suffered in a preseason game with the Giants in Cleveland in 2017. And he blames Jets defensive coordinator Gregg Williams, who spent 2017-18 with the Browns.

“I had people who were here when he was here telling us, ‘If you get a chance, take a shot at him. If you can hurt him. I guarantee he’s going to leave the game hurt,’” Beckham said Thursday.

The Browns play at the Jets on Monday night. When Beckham was asked about Williams’ scheme and if he expected to face man-to-man coverage, Beckham saw an opening and began to go after Williams.

Williams was suspended by the NFL for the 2012 season for his leading role in the New Orleans Saints’ bounty scandal that paid players for injuring opponents. He returned to the league in 2013.

Williams, who’s scheduled to talk to Jets reporters Friday, was coordinator for the Browns the last two seasons and interim coach for the final eight games last year. He interviewed for the permanent job, but Freddie Kitchens was hired.

Beckham arrived in March in a blockbuster trade with the Giants. It’s fair to wonder if he would’ve reported to the Browns if Williams had gotten the job.

Until his Browns debut Sunday in the 43-13 loss to the Titans, Beckham’s previous game at FirstEnergy Stadium was during the 2017 preseason. He suffered the high left ankle sprain when defensive back Briean Boddy-Calhoun hit him in the knee as he landed while making a catch.

“It’s preseason. It’s like a known rule, in preseason nobody in the NFL’s really out to do stuff like that,” said Beckham, who hasn’t played in a preseason game since. “I had players on this team telling me that that’s what he was telling them to do, take me out of the game, and it’s preseason. So you just know who he is. That’s the man calling the plays.”

Beckham returned for Week 2 in 2017, saying he rushed back to help the team. He suffered a broken left ankle a few weeks later and missed the final 11 games.

He thinks the preseason hit from Boddy-Calhoun led to the broken ankle.

“That’s exactly what it did. I came back too early for my team. I gave them all I had even though I knew that I was still three weeks out,” Beckham said. “I felt that pressure to be able to come out there and do what I can to help the team, so I just came back too early on an ankle that was already — if God wouldn’t have blessed me the way that I am, I probably would’ve blown my knee in that preseason game if I couldn’t have gotten my foot out the ground. And that high ankle sprain led to the broken ankle on the left and then which led to compensation in many different areas and just kind of like a little spiral.

Beckham missed 16 games over his final two seasons with the Giants, including the final four last year with a quadriceps injury. Without the injuries, they may not have been willing to trade him.

He links the left quad injury to the original ankle injury.

“My doctor told me that something like that was going to happen and I ended up catching a nasty hematoma last year,” Beckham said. “Banged up, and I just tried to play through it. It was like the Thursday before the fourth-to-last game. I was running an out and up. I stuck on the up and my quad just tore and it was torn the entire back end of the season. There was really nothing I could do about it.”

The Browns committed 18 penalties for 182 yards in the opening loss, including six 15-yarders. Beckham, who wasn’t one of the guilty parties but had a famous on-field brawl with cornerback Josh Norman in 2015, was asked if Williams will have his players try to get under the skin of the Browns.

“If I was a coach, I would never teach what he teaches, but that’s just him and what he does,” Beckham said. “So there’s no really getting under my skin anymore. It never was the case. There’s a lot of extra stuff that went on that people don’t know about that I was more frustrated with than anything.

Everyone’s grieving, but Freddie Kitchens says bond formed in locker room will help Chris Smith, Browns get through tragedy
NFL At 100: Jets-Browns squared off in MNF’s debut in 1970