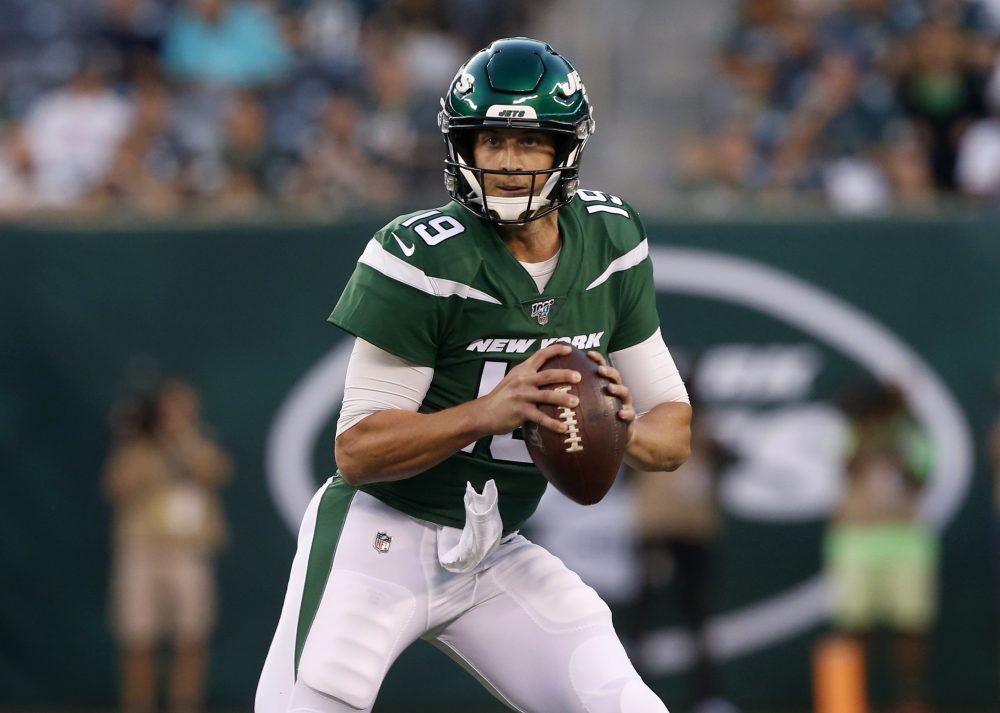 The Browns caught a break when Jets quarterback Sam Darnold was diagnosed with mononucleosis and ruled out for the game. Trevor Siemian is trying to make sure it’s not the kiss of death for the Jets.

“We signed Trevor specifically because of his 24 starts over his career with a winning record,” coach Adam Gase said. “Has a lot of experience, has been on winning ballclubs, has the respect of the locker room. There’s confidence there.

“Nothing really bothers him. He’s not a panic guy. He’s got a coolness about him.”

Darnold was the No. 3 pick in the 2018 draft and had a promising rookie season, so a drop-off could be assumed when he’s not on the field. The Browns can’t afford to have that mindset.

“It hasn’t changed our game plan really at all,” middle linebacker Joe Schobert said. “(Siemian’s) an NFL quarterback, he’s started games in the league. So he can make the throws, he’s a smart guy, a Northwestern guy.”

The Jets threw a bunch of underneath routes in the opening loss to the Bills, so their approach shouldn’t have to change with Siemian distributing the ball.

“He is more than capable of stepping in and making things happen for the Jets,” defensive coordinator Steve Wilks said. “Our approach is still we have to do a great job coming in there executing our game plan, regardless of who is at quarterback.”

OUT OF HIS HANDS

Baker Mayfield held onto the ball too long in the loss to the Titans. The difficult down-and-distances caused by penalties, an abundance of downfield play calls, looking for receiver Odell Beckham Jr., smart coverage by the Titans and indecision from Mayfield all contributed

“Get rid of the ball,” Mayfield said. “We can be better overall as an offense. It ultimately comes back on me. I need to get everybody on the same page.”

The improvement needs to be evident against the Jets. Holding the ball leads to big hits on the quarterback, and Mayfield’s right hand was sore after Week 1. And Jets coordinator Gregg Williams will bring the blitz all night, so Mayfield won’t have time to hesitate.

“Just getting the ball out and knowing that we have to have answers for what they are doing,” Mayfield said. “When we have all of our guys out there, teams are going to play differently, so have an answer for whatever coverage they are going to bring.”

A quick-hitting passing game has another huge benefit: taking pressure off the offensive line. The Browns have a couple of questions across the front, and coach Freddie Kitchens should adjust accordingly.

Le’Veon Bell sat out the 2018 season in a contract dispute with the Steelers. He signed a four-year, $52.5 million contract with the Jets and resumed his career last week with 17 rushes for 60 yards (3.5 average), six catches for 32 yards and a touchdown and a 2-point conversion. He became the fastest player in NFL history to reach 8,000 scrimmage yards, getting there in 63 games, one faster than Hall of Famer Eric Dickerson.

“It does not look like he took a season off,” Gase said. “He played every play. He played as good as you can ask anybody to play. He was an impact player for us.”

“He looked dangerous … looked like the guy we played against for a lot of years,” Schobert said.

Bell has averaged 128.4 yards per game, the best in NFL history for players with at least 50 games. He’s patient when he gets a handoff and deadly when he gets a pass. He has 5,396 rushing yards and 2,692 receiving yards on 318 catches. The Browns allowed 123 rushing yards and 4.4 an attempt in the opener and gave up a 75-yard screen pass for a touchdown. Bell could expose those weaknesses if not corrected.

Kitchens called him “a mix between power and finesse,” and nickelback TJ Carrie said he “enhances everything” for an offense.

The Browns defensive line must play better than it did in the opener if it’s going to be the strength of the team, as advertised.

Myles Garrett had two sacks for the sixth time in his three-year career and Larry Ogunjobi one, but the good plays were offset by dumb penalties and an overall lack of impact. Garrett was penalized 15 yards for striking tight end Delanie Walker in the face mask, Sheldon Richardson had a late hit on quarterback Marcus Mariota and a neutral zone infraction that gave the Titans a first down and Olivier Vernon didn’t register an official stat in his Browns debut after an offseason trade.

“We were disappointed in all the guys from the standpoint of selfish penalties,” Wilks said. “One thing that we can’t tolerate is pre-snap and post-snap. We control those and that to me is just a lack of discipline.”

“I need the penalties to cease. That is what I need,” Kitchens said.

It’s not that simple. The Titans used play-action fakes, bootlegs and screens to slow down the pass rush and frustrate the linemen. The Jets are likely to steal from that formula, especially with Siemian at the helm.

“Starting with me, we have to come up with different ways to be creative in how we are going to attack certain teams,” Wilks said. “I think we are all right in that situation now moving forward in some of the things that we are going to try to do.”

With linebacker C.J. Mosley out with a groin injury, safety Jamal Adams is the player to watch on the Jets defense. He was the sixth pick in the 2017 draft and made his first Pro Bowl last season while being voted second-team All-Pro. He ranked in the top three among NFL safeties with 115 tackles, nine tackles for loss, 3.5 sacks, eight quarterback hits, 12 passes defensed and three forced fumbles.

“Jamal is obviously a very versatile player, a great leader for that team not just the defense,” Mayfield said. “He is able to do a lot. A big, physical safety that can move around, too. He is a guy that changes the game, so you have to know where he is.”

Monken said Adams’ love for the game is obvious.

“You better bring it because when he gets around the line of scrimmage, he is a physical, physical man,” Monken said. “That is his game — energy and physicality.”

Adams will see a couple of familiar faces among the Cleveland receiving corps. Beckham and Jarvis Landry preceded him at LSU.

“I’m sure when the whistle snaps, he’s not going to be as friendly, but that’s my little bro, that’s my brother,” Beckham said. “That’s my guy through and through and he’s a phenomenal player. I’ve seen that since the day he walked into LSU, his charisma, the way he carries himself on the field. He plays with a lot of energy and he’s elite. So it’s exciting to be able to go up against him.”

Fines, in dollars, assessed to Browns players after the team committed 18 penalties for 182 yards in the opening loss to the Titans

The prediction: Browns 24, Jets 20
Analysis: Browns still have long way to go, but win over Jets is necessary first step