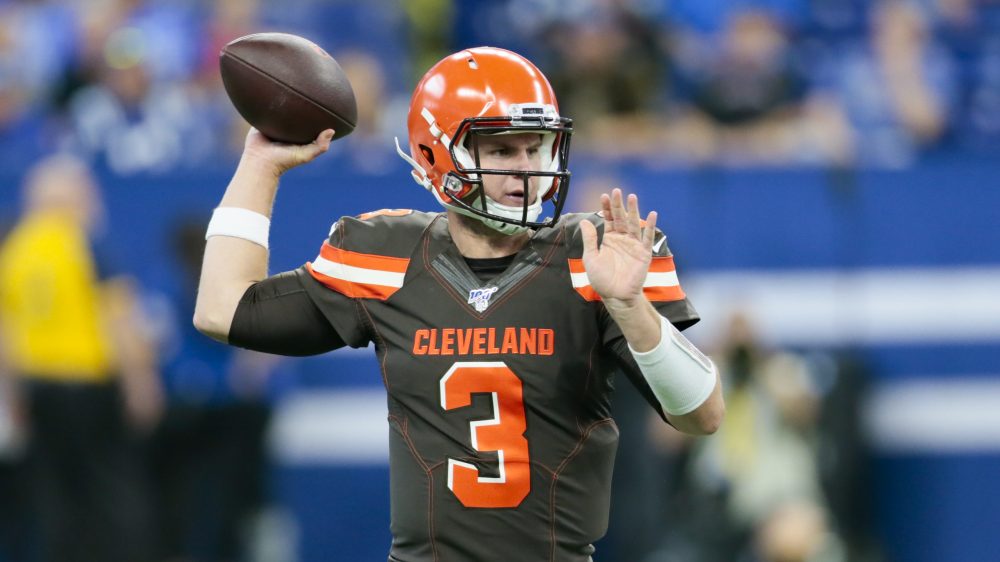 The Browns had a new backup quarterback Monday night against the Jets.

Garrett Gilbert was one snap away from the huddle after veteran Drew Stanton was placed on injured reserve before the game with a knee injury. Gilbert, 28, was the top quarterback in the defunct Alliance of American Football with the Orlando Apollos, then signed with the Browns.

The quarterback depth chart now consists of only Lake Travis High School graduates. Gilbert (6-foot-4, 230 pounds) was four years ahead of starter Baker Mayfield at the school in Austin, Texas, and they’ve been friends for years.

Stanton, 35, signed with the Browns as a free agent before the 2018 season and served mainly as the No. 3 quarterback. He didn’t see any game action and hasn’t played since 2017 with the Cardinals.

Stanton first appeared on the injury report after Friday’s practice, when he was a full participant. He was limited Saturday and had been listed as questionable on the official injury report.

Stanton isn’t expected to need surgery and is eligible to return from IR before the end of the season — if the Browns were to designate him. He must miss at least eight games.

Gilbert was a sixth-round pick of the Rams in 2014 and his only NFL action came in the finale last season with Carolina, as he threw three passes. He also had a stop with the Patriots.

Defensive lineman Chris Smith was active Monday night and named a game captain by coach Freddie Kitchens, less than a week after his girlfriend, Petara Cordero, was killed in a traffic accident.

Smith released a statement explaining his decision to play.

Cordero, who gave birth to their baby girl last month, was killed when she was struck by a car while standing on the shoulder of I-90 west early Wednesday morning after Smith’s car had a tire blow out.

The statement sent out by Smith’s spokesperson thanked everyone for their prayers, condolences and well-wishes. The families for Smith and Cordero also asked for “complete privacy” to grieve.

Putting Stanton on IR allowed the Browns to promote running back Elijah McGuire from the practice squad. He was active Monday night.

The Browns wanted a third running back available with Dontrell Hilliard inactive with a concussion. D’Ernest Johnson and McGuire backed up starter Nick Chubb.

McGuire (5-10, 214) was a sixth-round pick of the Jets in 2017 and spent the previous two years with New York. He made five starts in 24 games, rushing for 591 yards and four touchdowns and catching 36 passes for 370 yards and two touchdowns.

No. 3 receiver Rashard Higgins (knee) was inactive. He was hurt in the first half of the opener, didn’t play in the second half and was limited in practice last week.

Damion Ratley was expected to take his spot.

** With free safety Damarious Randall out with a concussion, Eric Murray started. He was acquired in a trade for defensive end Emmanuel Ogbah on April 1.

** Defensive end Genard Avery and offensive lineman Austin Corbett were healthy scratches for the second straight week. Chad Thomas is ahead of Avery on the depth chart, and recent additions Justin McCray and Wyatt Teller are ahead of Corbett, the No. 33 pick in 2018.

** Receiver Odell Beckham’s famous one-handed catch against the Cowboys was ranked No. 46 on ESPN’s top 50 plays in NFL history.