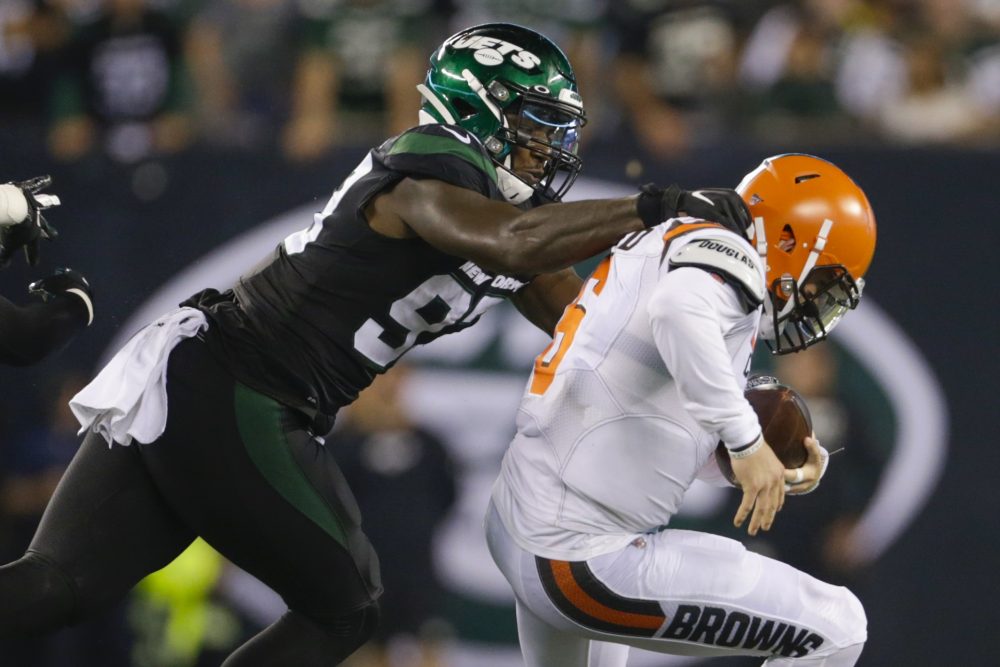 Baker Mayfield has looked hesitant in the pocket during the first two games. It’s a striking and troubling departure from the decisive, quick-firing, accurate quarterback of a year ago.

Coach Freddie Kitchens was asked if defenses are playing Mayfield differently to take away the quick passes.

“No, I do not think so,” he said Tuesday on a conference call. “I have to do a better job of getting the ball out of Baker’s hands quicker.”

Mayfield was sacked three times and officially hit three more Monday night in the 23-3 win over the Jets. He was sacked five times and hit twice more in the opening loss to the Titans.

“He is taking too many hits. I do not like my quarterback to take hits,” said Kitchens, the play caller. “I need to get the ball out of his hands quicker.”

The offense has struggled to find a consistent rhythm through two games as it seeks to incorporate receiver Odell Beckham Jr. into the lineup. Offensive coordinator Todd Monken is also new to the mix.

Kitchens believes the growing pains have contributed to Mayfield’s indecision and tendency to hold the ball.

“That probably has a lot to do with it,” he said. “My job is to, until we get to that point, do what we can do good right now and that is a week-to-week thing. And I have to do a better job of doing that.”

He finished with 325 yards, but 89 came on a short pass that Beckham took for a touchdown. He made some nice throws to Beckham and Damion Ratley downfield but missed easier tries — he went just 19-for-35 — and threw an interception. The three sacks came despite an improved effort from the line.

“Some of the plays he looked good on and some of the plays he did not look so good on, but it is all things that we can correct,” Kitchens said. “I can do a better job personally putting him in better situations on a more consistent basis. That is the way we will go about that.”

Not only did Kitchens want the blame on his shoulders, he bristled when asked about a lack of improvement from Mayfield to start his second season.

“Every game is not the same. The quarterback’s job is to win the game, and that is what he did last night,” he said. “I will reiterate, I need to put him in better situations, too.”

Kitchens put the ball in Mayfield’s hands one too many times, according to many observers.

With a 20-point lead, the win secured and two minutes left, Kitchens called for a pass on third-and-8. Mayfield was taken down awkwardly for a sack but appeared to be fine.

Kitchens said he called a pass because a run would’ve lost 3 or 4 yards, then was asked if that mattered with a three-score lead.

He liked that Mayfield didn’t throw the ball away and stop the clock but wanted him to be more careful.

“Once it was not open initially, I would like for him to do a little better job of protecting himself,” Kitchens said. “When they cover it, you just protect yourself. I do not need him out there taking unnecessary shots.”

Defensive end Myles Garrett seems determined to play with more aggression this season, totaling a league-leading five sacks in two games. He’s also been called for three 15-yard penalties — an unnecessary roughness against the Titans and two roughing the passers vs. the Jets — so he needs to do a better job staying on the correct side of the line.

“Just continue to work with him and make him understand that I do not ever want to take his aggressiveness away, but he does have to understand when he is going to hurt the team,” Kitchens said. “I think he did a much better job of that last night. We still had a couple of instances where he kind of let it slip, but he is going to continue to get better at that when he gets a feel for what they will call and what they will not call. I expect Myles to be better and keep getting better in that area each and every time we go out.”

Jets backup quarterback Trevor Siemian was injured on the second roughing penalty and will miss the rest of the season with significant ligament damage in his ankle.

Kitchens was adamant during the preseason he wanted three quarterbacks on the active roster in case disaster strikes.

He’ll have to live with two, at least for the time being.

Veteran Drew Stanton was placed on injured reserve Monday with a knee injury. Garrett Gilbert stepped into the backup role, and there’s no third quarterback on the roster or practice squad.

“It is always risky having two, but there are a lot of things that have to happen,” Kitchens said. “You have to look at your team. Having a third quarterback is not the most pressing decision a lot of times. You have other things you have to cover up for in other areas. That is just where our emphasis is right now.”

Stanton first appeared on the injury report Thursday, but Kitchens said the knee issue had been “ongoing.”

“The best course of action right now is to kind of give him a break and see if we can get it better in that instance with the possibility of coming back down the road,” he said.

Stanton could return from IR but he must miss at least eight games.

The cornerback rotation is over.

“Greedy played pretty well,” Kitchens said. “There are a couple things he would like to have back, but overall he did a nice job. I was pleased with Greedy. He competed. He competed every snap.”

The offense consistently took the play clock down to the final second or two, but Kitchens didn’t view it as a problem. He said in some instances Mayfield used the time to check the defense at the line, and as the game progressed and they held the lead they wanted to take as much time off the clock as possible.

** Kitchens didn’t have an injury update, referring to many situations as day-to-day. He did say running back Nick Chubb was good after getting the wind knocked out of him and leaving for a few plays.

** Next up is a Sunday night matchup at FirstEnergy Stadium against the Rams, the defending NFC champs.

“It is a great challenge for is,” Kitchens said. “They are a very good team. We are going to show up on Sunday and see where we are.”

** Defensive lineman Chris Smith was on the field for 26 defensive snaps after deciding to play less than a week after the death of his girlfriend in a traffic accident.

** Jermaine Whitehead played all 68 defensive snaps and had six tackles in place of free safety Damarious Randall, who was out with a concussion.