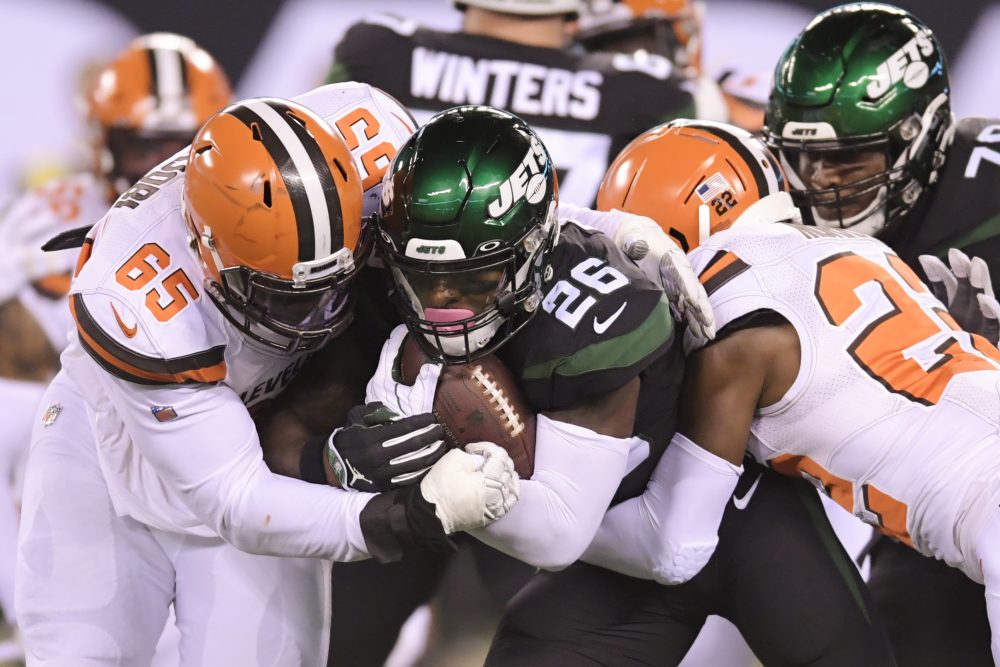 BEREA — Right tackle Chris Hubbard (foot) didn’t practice Wednesday and was in a walking boot in the locker room.

He told The Chronicle-Telegram he felt something in his ankle in the fourth quarter Monday while pulling on a play. He finished the game.

He said he was waiting for test results and didn’t know how long he’d be out, calling himself “day-to-day” for now.

The injuries piled up as the Browns began preparations for the Rams, the defending NFC champs.

** Linebacker Christian Kirksey (chest), strong safety Morgan Burnett (quadriceps) and defensive tackle Larry Ogunjobi (ankle) were also additions to the injury report and didn’t practice. They worked on the side with the athletic training staff.

** Running back/returner Dontrell Hilliard returned to practice after missing last week with a concussion and was a full participant.

The Scottish Hammer has nailed his transition to the NFL.

Gillan has punted 11 times in two games, with only one returned. He’s dropped eight inside the 20.

Gillan, an undrafted rookie out of Arkansas at Pine Bluff, beat out veteran Britton Colquitt for a roster spot.

“From outside, I guess everybody would say it’s pretty difficult, but when you work so hard at something, you kind of go out there and let the hard work pay off or the training pay off,” Gillan said. “I just go out there, catch the ball and cause fair catches and punt it where Coach wants it, that’s about as hard as it gets for me.”

Spencer Lanning in 2013 was Cleveland’s last punter to win the award.

Gillan found out he made the club while in a pub

Linebacker Clay Matthews III has two sacks in two games with the Rams after signing as a free agent after 10 years with the Packers. He’ll get to see his dad get inducted into the Browns’ Ring of Honor on Sunday night.

“We had a chance to talk about that last week,” Rams coach Sean McVay said. “First of all, it is an incredible demonstration of what a special family they are and what a talented family they are. I know it means a lot to him to be able to be there.

“He has meant a lot to our football team — a great leader, a great player. I have had a chance to learn from him, as well as all the experience. I know he is certainly proud of his dad, and hopefully this induction will lead to the induction into the NFL Hall of Fame, as well.”

Browns receiver Odell Beckham Jr. gushed about McVay, who led the Rams to the Super Bowl last year in his second season as a head coach.

“He’s a guru. He’s a younger-minded coach,” Beckham said. “So he’s going to go get it, and they take shots, make a lot of plays.

“He’s a special coach. He brings a lot of energy to that team. We’ve got our work cut out for us.”

“I have a whole lot of respect for Odell — the type of competitor he is and what type of talent,” he said. “He is so unique. There are no limitations in his game. He can catch a short pass and take it all the way. He can track the ball down the field as well as anybody. You can put him anywhere and he can run any sort of route. Obviously, the impressive hands.”

Mayfield was sad to see injuries hit a couple of his peers Sunday. Pittsburgh’s Ben Roethlisberger is done for the season with an elbow injury, and New Orleans’ Drew Brees is expected to miss about six weeks following thumb surgery.

“The one with Ben is scary,” Mayfield said. “It was a non-contact throwing injury. You never want to see that. Those are guys that are faces of their franchise.”

Despite the return of Hilliard, receiver Jarvis Landry could still be used to return punts. He averaged 12 yards on four returns against the Jets.

“Jarvis is aggressive. I like people being aggressive in fielding the ball,” coach Freddie Kitchens said. “Yeah, you may see him again sometime down the road.”