Myles Garrett has chance to make statement for Defensive Player of Year against Aaron Donald, Rams 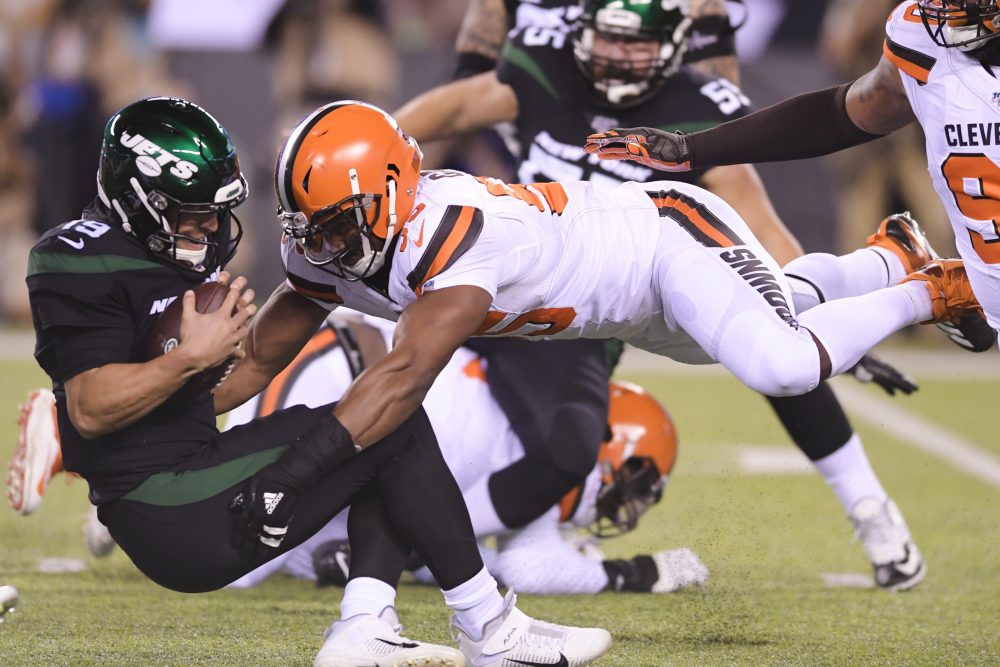 He has a prime opportunity to put a hand on the crown Sunday night.

Garrett, Cleveland’s Pro Bowl defensive end, has had Rams defensive tackle Aaron Donald in his sights since entering the league as the No. 1 pick in 2017. The target will invade FirstEnergy Stadium in prime time.

Donald is the reigning two-time Defensive Player of the Year. The award’s been near the top of Garrett’s to-do list since he left Texas A&M and declared he wanted to be the best player in the history of the league.

“I have to be the best defensive football player every night I step on the field. That’s how you get the award,” Garrett said Wednesday, downplaying the head-to-head matchup. “You’ve got to be consistent no matter who’s opposing you, so that’s the goal. It doesn’t matter that I’m playing against him. It matters that it’s just another matchup with another team and they went to the Super Bowl last year, so you know they have a lot going for them. So if you’re able to have success against them, you know you’re pretty good.”

The football world will get an up-close comparison of the 6-foot-4, 262-pound end with the perfect body and the versatile tackle who makes the most of his chiseled 6-1, 280-pound frame.

Donald has already proved himself as an all-time great. He’s been to the Pro Bowl five times in five years, is a four-time All-Pro and was Defensive Rookie of the Year in 2014 after being the No. 13 pick out of the University of Pittsburgh.

He led the league with 20.5 sacks last year, giving him 59.5 for his career. He doesn’t have one through two games and didn’t get his first last year until Week 4.

Beckham has no doubt Garrett has what it takes to replace Donald as the league’s best on defense.

“I don’t think there’s no way he shouldn’t get a sack in the first quarter and the second quarter. It’s just the same how I feel about scoring. I don’t feel like I shouldn’t be able to score a touchdown in each half. So when you have a guy like that in Myles, you just expect him to be able to do those things, and I think he’s fully capable of breaking every single record and being as disruptive as 99 is.”

Sacks aren’t the only metric that matters, but they’re a big one, and Garrett has a 5-0 lead over Donald through two games and leads the league. He introduced himself to the prime-time audience Monday night with three sacks in the 23-3 win over the Jets.

He also made a bad impression with a pair of roughing the passer penalties, one coming on the play that Jets quarterback Trevor Siemian suffered a season-ending ankle injury.

Garrett striving for greatness, not worried about the pressure

“You don’t want to put anybody out for the season,” Garrett said. “It’s their job and it’s something that you don’t do unless you love it, and you don’t want to take that away from anybody. I hope he comes back faster and stronger than he ever has and I wish the best for him.”

Garrett has been unable to fully enjoy his fast start, saying “yes and no” when asked if he liked it.

“The yes is five sacks and I have a lot of positive plays,” he said. “I also have some negative plays that have gone against me, the offsides, unnecessary roughness. It may be close, but at the end of the day I still got called for it and that’s going to detract from the success of my team so I’ve got to find a way to get around that and be better.”

He landed with all his body weight on the first roughing call and said the official told him the second hit, which caused the injury, was too high and too much weight.

“It’s hurting now because you want to play aggressive, you want to play passionate and you just want to finish the play,” he said. “I’m gonna keep on playing with the same aggression, just gotta be smarter, better in the strike zone and try and pull off so I don’t land on them with all my weight.”

He hopes he doesn’t get a reputation as a dirty player.

Rams coach Sean McVay said there’s no question Garrett can become a Defensive Player of the Year if he continues on this trajectory.

“He has a repertoire of moves, and you can see that he is at his best in those most important moments,” McVay said. “He has made a huge impact. Even just watching when you have the game on in a TV setting, you just feel what an impact he makes on the game.”

Garrett is looking forward to sharing the field with Donald.

“He’s one of the best ever now in the middle. That’s already,” he said. “His get-off is like an end. He has great skills and moves being down there as a D-tackle and once you combine those two things, you get a deadly combination like that.

“I’m going to be watching and seeing part of the show in person and try to give him something to look at as well.”

Baker Mayfield looks to bounce back, beat blitz and create another memory against Jets
Baker Mayfield not panicking over early struggles: We are going to figure it out