Odell Beckham Jr. not satisfied: Says he can run faster, player better and NFL has different “rule book” for him 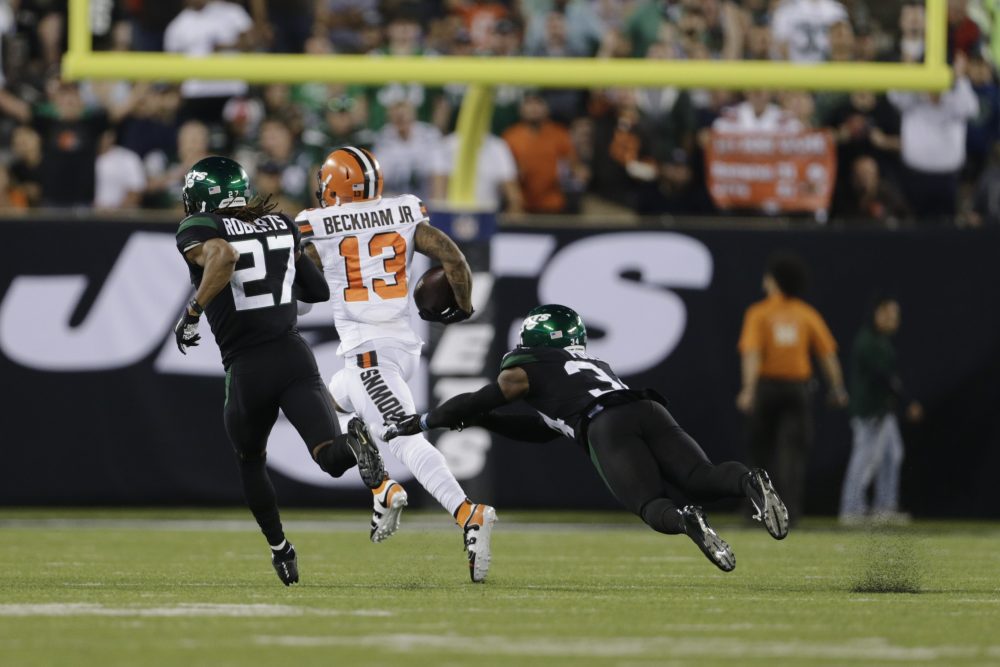 BEREA — An acrobatic one-handed catch. A career-long 89-yard touchdown on which he reached 21.7 mph. Escorted off the field by an official for a visor violation. Promoting a watch company in the postgame news conference.

The return to MetLife Stadium for “Monday Night Football” provided a look at what receiver Odell Beckham Jr. brings to the Browns.

“I know that once I get rolling, it’s very hard to be stopped, so I just know what I’m capable of bringing to this team, bringing to the table on any given night,” Beckham said Wednesday. “Not to say that I had a bad game, but it wasn’t the best of games that I had. Was just able to make a few plays here and there, so I’m ready to do whatever this team needs to where I could help in each and every category.”

“I felt a little sluggish for whatever reason,” he said of Monday night, when the Browns beat the Jets 23-3. “I’m not saying it was a bad game, it just wasn’t personally a good game. Like I didn’t go home with like a great feeling. I’m just happy that we won the game.”

Beckham puts on show in win over Jets

His return to New Jersey, where he spent five years with the Giants, had its share of drama. He was removed from the game on third-and-goal in the first quarter because of the visor on his helmet.

“It says you have to wear a clear visor, you have to be able to see your eyes through the visor, which you can clearly see my eyes in pictures that is 360, 1080P,” Beckham said. “But one of my coaches always told me, ‘there’s rules and there’s rules.’ I don’t know if my rule book is specific to the rest of the league. I think I have a different rule book and that’s what I have to deal with so I learn from it.”

The visor was replaced on the sideline and he returned to the game. He was asked if he felt singled out by the league.

“Just open your eyes a little bit,” he said. “There’s people across the league with tinted visors, black visors and it’s me on Monday night in New York and la la la, pull him off the field. It is what it is.

“I’m just upset because I hurt my team and I didn’t get a chance to make a play down there, free somebody up to get open and we ended up kicking a field goal and that could be the difference in the game. So it’s very big and I feel bad on my part that I let the team down there.”

He vowed to rise above the distractions.

Beckham also felt picked on by the NFL when he was told he couldn’t wear the watch he wore in the opener, with the league citing safety concerns.

Watch company Daniel Wellington announced Beckham as “our new icon” in a short video released on Twitter. The announcement came after a week of headlines about Beckham and the $189,500 Richard Mille watch he wore in the opener, then an unsolicited mention of Daniel Wellington after the Jets game.

“There’s always a method to the madness,” Beckham said. “It’s a partnership with Daniel Wellington, I’m very happy to do that.”

According to the company’s website, the Daniel Wellington watches cost $139-$229.

“But again the watch topic, I’m going to leave it alone from now on,” Beckham said. “I’m just strictly on football.”

Back on the field, Beckham had the fastest speed of a ball carrier on a scoring play this season at 21.7 mph, according to NextGenStats.

“I think he is a guy that really has another notch of speed when the lights come on,” quarterback Baker Mayfield said. “I keep saying it, get the ball in his hands and seeing what he can do with it. Obviously, he showed what he can do.”

Odell Beckham Jr. says there was “method to the madness,” named “new icon” for inexpensive watch company
Browns preparing to be without LB Christian Kirksey, as team evaluates “best course of action” for chest injury