Baker Mayfield not panicking over early struggles: We are going to figure it out 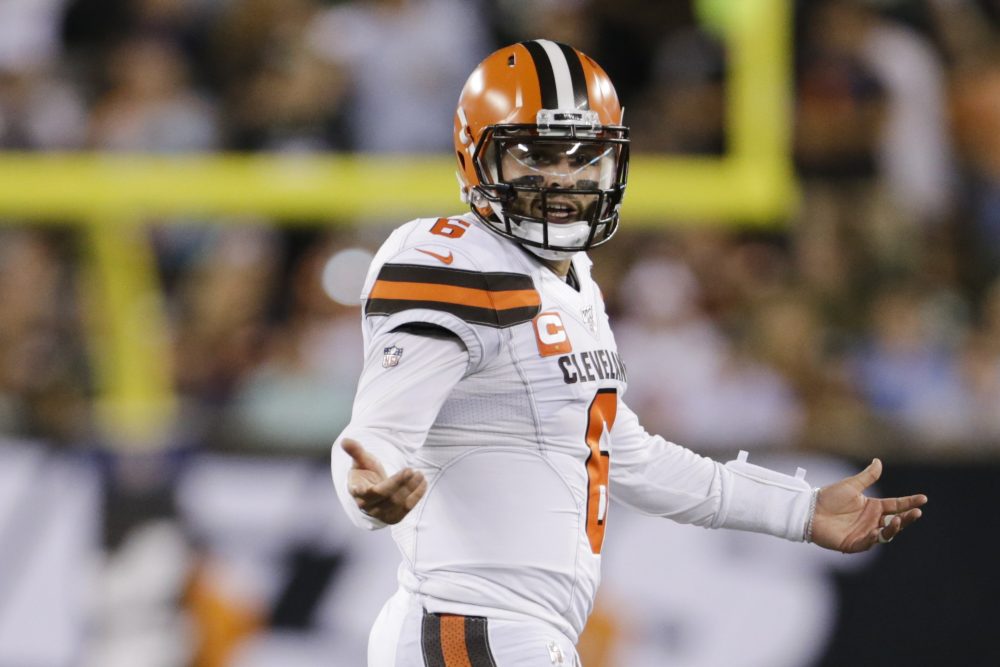 BEREA — Baker Mayfield is holding the ball too long and taking too many hits.

The offense can’t sustain a rhythm and is too reliant on big plays. It scored 13 points against the perennially 9-7 Titans and only 23 against a depleted Jets team.

To make matters worse, the NFC champion Rams are coming to town Sunday night to kick off a stretch of five straight games against 2-0 foes that includes road games against rival Baltimore and Super Bowl champion New England.

While many fans are filled with angst, Mayfield isn’t about to panic.

“I do not feel any pressure about that,” he said Wednesday, stopping short of Aaron Rodgers’ famous “R-E-L-A-X” message from 2014. “We are going to figure it out. Everybody is acting like the world is falling down. We can play better, but a win is a win. We are never going to take that for granted.”

The victory over the Jets calmed the waters some and prevented full-blown hysteria, but the sloppy offensive performance created more questions rather than providing answers.

“I know we’re not where we want to be, but the good thing is we have more games, more opportunities, more practices to come together and prove ourselves,” said receiver Odell Beckham Jr., who had six catches for 161 yards and a touchdown vs. the Jets. “Just like anything else, it’s really not where you start, it’s where you finish. We just need to improve this week facing a very, very good team coming in Sunday night.”

The Browns are tied for 23rd in the league with 18 points a game. They’re 15th with 360.5 yards a game, but much of that came on big plays, particularly the 89-yard catch-and-run by Beckham.

He said the struggles are natural given the changes from last season. They start with him and include Todd Monken hired as coordinator.

“Everything’s just going to come with time,” Beckham said. “You added new pieces and still trying to figure everything out with this team.”

“There’s a lot of new concepts, sometimes it takes four to six weeks to really understand your players and where you’re going,” left guard Joel Bitonio said. “Obviously we don’t have enough time because we’ve got to win games now. But it takes time to be as good as you want to be on offense.”

An example of the tough transition was an interception against the Jets. Mayfield threw over the middle for Beckham, but cornerback Darryl Roberts stepped in front and took it away.

“When we got on the plane, I remember telling him on the interception, that’s my fault. That sh– will never happen again,” Beckham said. “With guys like us we’re never going to be satisfied with just being OK.”

Mayfield has yet to make the anticipated Year 2 jump, or replicate the 2018 success that saw him set the NFL rookie record with 27 touchdown passes.

His quick fix for the offense is to get more completions with shorter throws, which should improve rhythm and help extend drives by setting up easier third downs. The Browns are 5-for-23 on third down.

Taking the checkdowns would also keep him from hanging onto the ball.

“Just getting the ball out, having answers for anything they do, doing what we are good at and finding completions.”

ESPN’s Booger McFarland said during the broadcast Mayfield was confused by late shifts from the Jets defense, and Mayfield has certainly looked hesitant at times, which may have contributed to uncharacteristic inaccuracy.

“Mechanics. It goes back to getting the basics down, not getting ahead of my feet and making sure I am in the right place at the right time,” Mayfield said. “Get my feet going and my eyes will follow.”

Kitchens takes responsibility for Mayfield holding onto ball too long

Mayfield and coach Freddie Kitchens have sparred this week — over who should take the blame for the struggles.

“I can do a better job personally putting him in better situations on a more consistent basis,” Kitchens said, applying the same sentiment to a variety of areas regarding Mayfield.

Mayfield, who struggled against good teams and defenses last year, believes a “big key” will be developing an offensive identity as the season progresses.

“I have to be better within the week of giving Freddie confidence in what we are calling and what we are doing to where we can just line up there and he can trust us to go do the job, and no matter what he calls I am going to get it done,” he said.

“He’s played his butt off,” he said. “We’ve got to scheme it better, we’ve got to play better up front, we’ve got to do a better job in terms of everywhere, route running, you name it. It’s on all of us to put ourselves in a better position to be more consistent.

“We’re close, we’ve just got to continue to build on the things we’re doing every day and continue to get better at it.”

Center JC Tretter, who was on the Packers when Rodgers told everyone to calm down, isn’t worried about his quarterback.

“We know what and who Baker is,” he said. “There’s really no concern what he’s going to bring to the table, both on the field and in terms of leadership. He’s going to be who we think he is.”

Myles Garrett has chance to make statement for Defensive Player of Year against Aaron Donald, Rams
Browns call Rams DT Aaron Donald “the best” and “a beast,” but JC Tretter wants teammates to remember he’s human and can be stopped