Browns preparing to be without LB Christian Kirksey, as team evaluates “best course of action” for chest injury 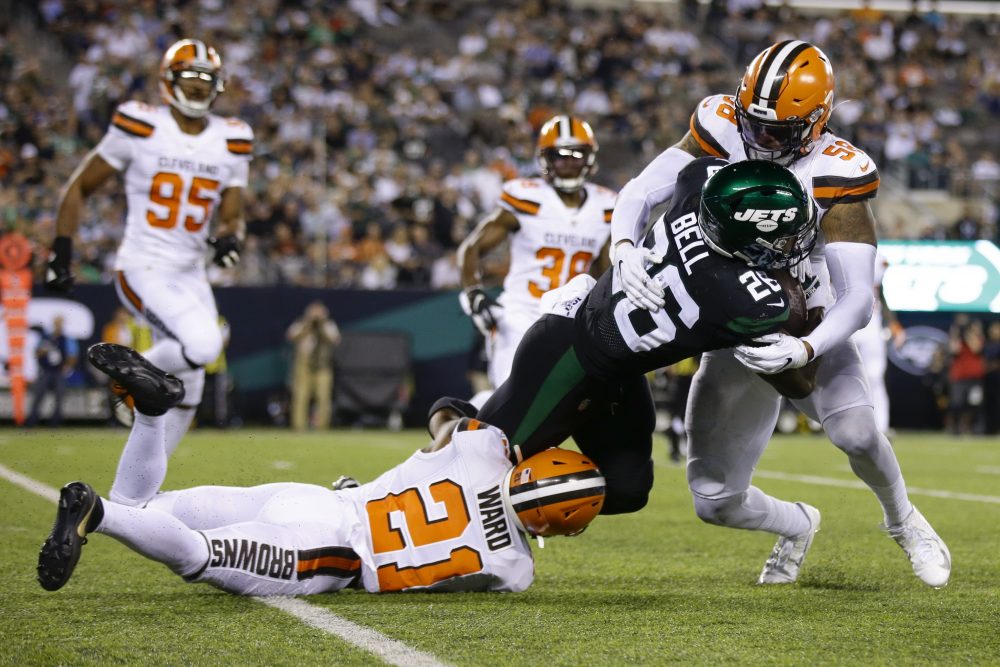 BEREA — Linebacker and captain Christian Kirksey watched his teammates stretch, then joined the athletic training staff off to the side of the fields to do some cardio work. He was out of the action for the second straight practice, won’t play Sunday against the Rams and could be sidelined for the rest of the season.

The Browns listed him with a chest injury on the injury report, which usually means a pectoral injury. Depending on the severity of a potential tear, he could be done for the season.

If it’s determined Kirksey can’t play with the injury, surgery could be next.

“We are trying to evaluate and see what the best course of action is with him,” coach Freddie Kitchens said Thursday after practice.

“He definitely wants to be out there for the team but it’s hard for his situation and I hope that with a second opinion everything can be fine and it won’t be too long, but just hoping and wishing him well,” rookie linebacker Sione Takitaki said.

Kirksey, 27, was off to a strong start with 11 tackles, including two for loss, in two games. He was injured Monday night in the second half of the 23-3 win over the Jets but returned to the game.

“He’s the leader in our room, he’s the leader on the defense, the vocal leader, he’s the leader on the team,” middle linebacker Joe Schobert said. “So not having his presence out there is definitely going to be missed. But I’ve got a lot of faith in the young guys, what they’ve shown through spring, through training camp, up to now. Now to be under the lights it’ll be a little bit bigger, but they played at big-time universities in big-time games and I’m excited to see what they do.”

Rookie Mack Wilson, a fifth-round pick out of Alabama, played 11 defensive snaps in place of Kirksey against the Jets. He had four tackles and was penalized 15 yards for lowering his helmet to initiate contact on a tackle.

He will take Kirksey’s spot alongside Schobert.

“Mack had a few good reps last week. Wasn’t too bad,” defensive tackle Sheldon Richardson said. “Just got to come in, don’t try to do too much. Come in and make the plays that are meant for you to make and help out any way you can. Other than that, just do your job.”

Adarius Taylor, the strongside linebacker in the base defense, is expected to miss a second straight game with a high ankle sprain. The Browns weren’t in their three-linebacker base defense at all vs. the Jets, but if they are against the Rams, Takitaki would get the call.

“I’m waiting patiently in the wings for my chance and definitely don’t want to wish any injury to Joe or anybody,” said Takitaki, a third-round pick out of BYU, “but I’m definitely ready just looking at all of these injuries that have happened early in the season to all of these players. I’m definitely going to be ready if anything goes south.”

Kirksey was a third-round pick in 2014 and has started 54 games with 463 tackles, 11.5 sacks, two interceptions, 17 passes defensed, four forced fumbles and three fumble recoveries. He didn’t miss a game until last season, when he played only seven and was put on season-ending injured reserve with a hamstring injury.

“Obviously you never want to see a teammate go down, a good friend go down when it’s somebody you rely on right next to you in your position group, especially what he’s been through the last year,” Schobert said.

The Browns are dealing with other key injuries on defense as they prepare to face a Rams offense that has averaged a league-best 31.2 points since coach Sean McVay took over in 2017.

Odell Beckham Jr. not satisfied: Says he can run faster, player better and NFL has different “rule book” for him
Notes: LB Christian Kirksey placed on IR with chest injury