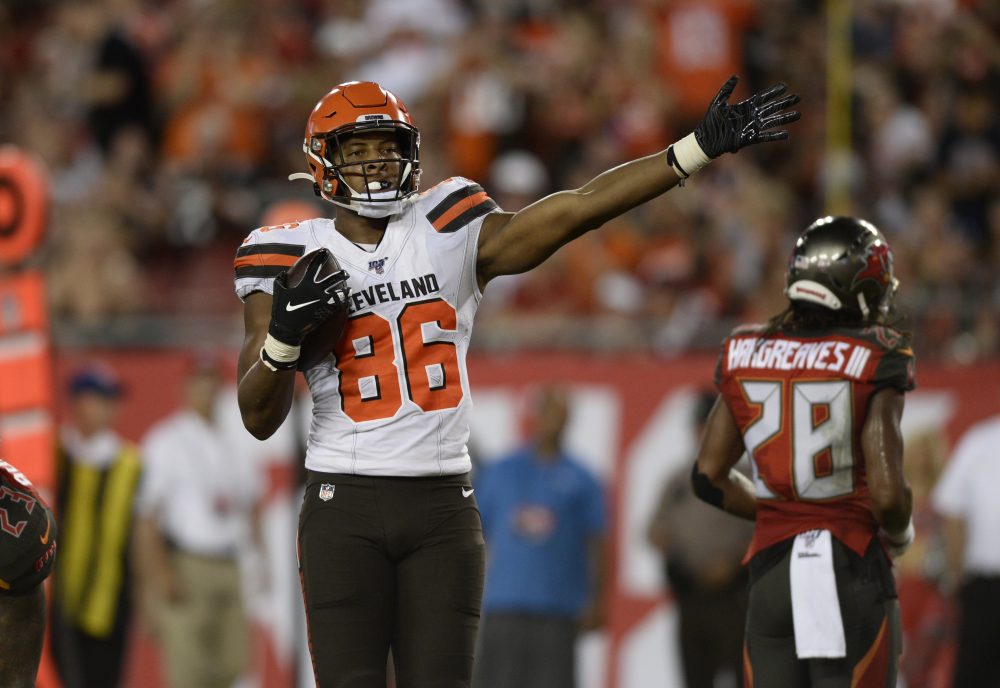 BEREA — Pharaoh Brown is used to being counted out and proving people wrong, so he’s confident the backup tight ends will fill the void if starter David Njoku misses extended time with a broken wrist.

“Hey, man, ever since I had a leg injury in 2014 people haven’t believed in me,” Brown said Thursday. “Sh–, the doctors didn’t believe I was going to come back and be able to play, but I’m here. I always had that mindset and I’ve always been eager to prove people wrong.

“I’m from Cleveland, man, you all know how it is out here, people don’t expect us to do anything. So that’s my mindset all the time.”

Njoku broke a wrist and sustained a concussion when he was upended trying to make a catch and fell awkwardly Monday night in a 23-3 win over the Jets. The medical staff was still deciding Thursday if he needed surgery.

“Everything is on the table right now,” coach Freddie Kitchens said. “We will see what the options are.”

Njoku, the No. 29 pick in 2017, had four catches for 37 yards and a touchdown in the opening loss to the Titans. He had 56 catches for 639 yards and four touchdowns last season.

He won’t play Sunday night against the Rams and reportedly will miss at least four weeks. Demetrius Harris, a six-year veteran, will move into the starting lineup, with Brown and Ricky Seals-Jones coming off the bench.

“There will not be any excuses in that room,” Kitchens said. “They will go out and compete. We will be ready to play.”

“Everybody’s hungry,” said Brown, who grew up in Lyndhurst and went to Brush High School. “You want to play, you want to be able to showcase what you can do.”

Brown’s severe leg injury happened during the 2014 season when he was at the University of Oregon. He tore a couple of knee ligaments during a game and internal bleeding almost forced an amputation.

“It was a pretty traumatic injury,” he said. “It added to the chip on my shoulder I play with, for sure.”

General manager John Dorsey drafted cornerback Denzel Ward with the No. 4 pick in 2018 and followed with cornerback Greedy Williams at No. 46 this year.

A deal seems like a long shot for the Browns. Not only do they have the two young starters, Ramsey wants a big-money extension — he showed up to training camp in a Brinks truck — and the Browns already have difficult decisions to make about how to allocate their salary cap space.

Ramsey, the fifth pick in 2016, got into a sideline fight with coach Doug Marrone last week. The Jaguars reportedly are asking for two first-round draft picks in return.

Browns defensive tackle Sheldon Richardson and Jets safety Jamal Adams were on opposing teams Monday but are on the same side of an issue important to them and many defenders.

Adams tweeted his disgust with being fined for shoving Baker Mayfield to the ground after he had thrown a pass. He was penalized for a late hit.

“This league is a damn joke!” he tweeted. “I just got fined $21k for this hit, I signed up to play football not two hand touch. Bullsh–! I don’t give a damn about these soft rules protecting QBs. Im gonna play MY brand of football everytime I step on the field. SMH”

This league is a damn joke! I just got fined $21k for this hit, I signed up to play football not two hand touch. Bullshit! I don’t give a damn about these soft rules protecting QBs. Im gonna play MY brand of football everytime I step on the field. SMH pic.twitter.com/SKlTmBBMf0

Richardson came to Adams’ defense when asked about pass rushers having to change their technique when it comes to hitting the quarterback.

“That’s stupid. It’s football, brother, you play the game,” he said. “I agree with Jamal, with what he said, ‘You’re protecting quarterbacks too much.’ They’re not the only people that get paid, D-linemen get paid, too. One guy’s cutting us. Just let it be fair.

“Give us a fair opportunity to compete and play full tilt. All the fine system setup is for defensive guys. That’s how we look at it. It’s the NFL. I don’t know what you can do. Can’t touch ’em in practice, can’t touch ’em in a game. But I get held, jersey ripped off me in a game and they look at me and say, ‘I didn’t see it.’ PG-13, that’s all I’m going to say.”

The Browns weren’t ready to make a decision on the roster status of right tackle Chris Hubbard, whose left foot remained in a walking boot Thursday.

“We are going to see where he is at the end of the week,” Kitchens said.

He’ll be replaced Sunday by Justin McCray, who was acquired from the Packers earlier this month in a trade during roster cuts. McCray (6-foot-3, 315 pounds) has played mostly guard in his career but filled in at right tackle during the opener.

“I have a lot of confidence in Justin,” Kitchens said. “He is competing, trying to get better and understands what is in front of him, and I expect him to go out and perform and perform well.”

** Ward, Williams and rookie safety Sheldrick Redwine were added to the injury report as limited participants with hamstring injuries.

The punter usually gets the credit for a fair catch, but the gunners must be in position to keep the returner from trying to gain yards. Special teams coordinator Mike Priefer said cornerback Tavierre Thomas and receiver KhaDarel Hodge have been great through two games, as only one of Jamie Gillan’s 11 punts has been returned, for 5 yards.

Hodge was claimed off waivers Sept. 1 after the Rams cut him.

“Our personnel people did a great job getting a hold of him, and I can’t believe the Rams let him go. He is so talented,” Priefer said. “He plays very, very hard and he is very intelligent.”

Hodge played 14 games for the Rams last year, so Priefer has picked his brain about their stellar special teams. Kitchens said the Rams run “every fake known to man” and Priefer said he started preparing for them in the spring.

Offensive coordinator Todd Monken admitted there was a problem in how long it took the Browns to snap the ball Monday night, with the play clock consistently ticking down to the last second. Kitchens said Monday it wasn’t an issue.

“We just know we have to do it better,” Monken said.

** Running back Elijah McGuire was waived.

He was promoted from the practice squad Monday because Dontrell Hilliard was out with a concussion, but Hilliard returned Wednesday.

** Priefer said he’ll likely use Hilliard and receiver Jarvis Landry as punt returners against the Rams.