Browns call Rams DT Aaron Donald “the best” and “a beast,” but JC Tretter wants teammates to remember he’s human and can be stopped 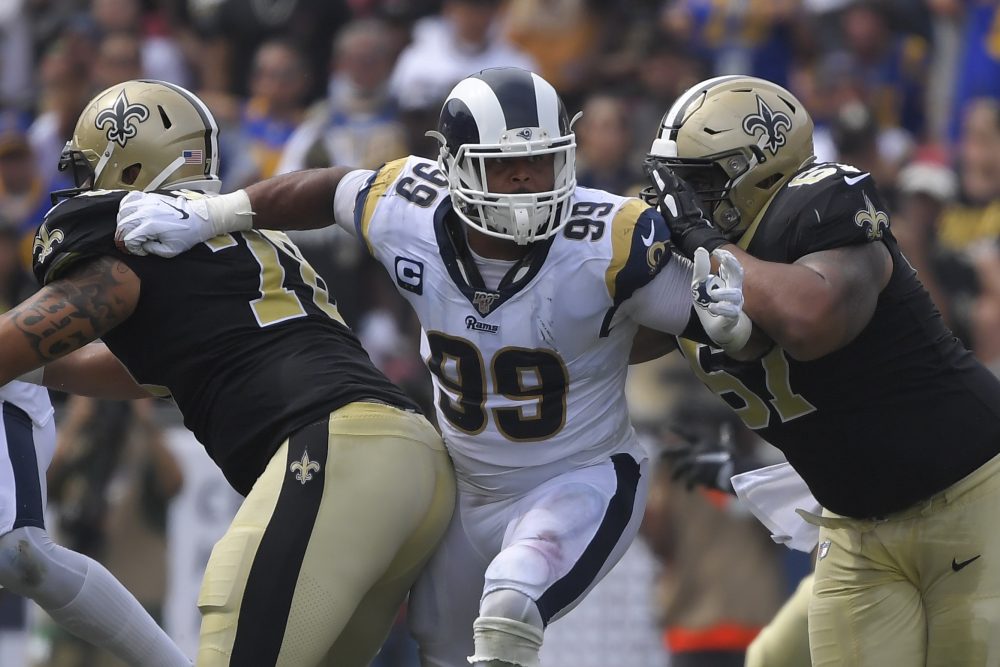 BEREA — Odell Beckham Jr. has such admiration for Rams defensive tackle Aaron Donald he forgot he’d be too busy to check out his performance Sunday night.

“Oh, yeah, I’m going to be watching. I’ve been watching AD for a long time,” he said this week. “He’s a very good dude and he’s a helluva football player. So I’ll definitely be watching, making sure that we take care of him.”

Then it dawned on Beckham he’ll be running slants and posts and comebacks while the offensive line is trying to stop Donald from reaching Baker Mayfield.

“Well, it’s gonna be hard to watch him, actually. Forgot about that,” he said. “I’ll be watching Myles (Garrett, Browns defensive end) but I’m not going to be watching him. Hoping that we don’t see him on any highlights or have to go back to the film and what happened and we’re just going to say ‘99 happened.’ So we’re just trying to eliminate that.”

Donald was a topic of conversation all week in the locker room, and a focus in the meeting rooms and the game plan. He’s won back-to-back NFL Defensive Player of the Year awards, and the Browns piled on the praise.

Donald (6-foot-1, 280 pounds) is the rare interior lineman to transcend the position. He led the league with 20.5 sacks last year and helped the Rams reach the Super Bowl.

But Browns center JC Tretter doesn’t want his teammates to be in awe of Donald or play with fear.

“I don’t think we look at it like we’re playing God reincarnate,” he said. “We’re playing a very talented football player and we’re going to have to bring our best to the table.

“But we’re not going into it thinking we’re looking down the barrel of a gun by going against him. We’re going to have to do our job and block him. But we’re going in ready for the challenge.”

Garrett has chance to make statement for DPOY against Donald, Rams

Donald was listed as questionable on the injury report with a back, but coach Sean McVay said he’ll play unless something unforeseen happens.

He was Defensive Rookie of the Year in 2014, has been a Pro Bowler after each of his five seasons and a first-team All-Pro the last four. He has 59.5 sacks and 98 tackles for loss in 80 regular-season games.

The Rams move Donald across the line, so all five Browns linemen will be tasked with trying to stop him. Left tackle Greg Robinson has known for years how difficult that can be.

Robinson was the No. 2 pick of the Rams out of Auburn in 2014. They took Donald with the No. 13 pick out of the University of Pittsburgh, right after the Giants grabbed Beckham from LSU.

Robinson, who’s on his third team and has never been to a Pro Bowl, realized Donald’s talent immediately.

“As rookies we all were just head spinning, we’re learning the league, but there was some things that I’ve seen no other man do and he can do it,” Robinson said. “Right away I knew he was a special guy.

“He’s just quick off the ball. You’re thinking your typical D-tackle, you just look at them like, ‘Oh, they’re just slow, they’re there to hold up space.’ The guy gets off the ball, he’s explosive, he’s strong, he could pass rush. He can do everything.”

Donald has never had fewer than eight sacks in a season, and 11 was his high before last year’s breakout. He’s been blanked through two games this season, held to two tackles and two quarterback hits.

But it was his outstretched hand Saints quarterback Drew Brees hit on a follow-through, causing ligament damage and forcing thumb surgery. And Donald has freed the rest of the line to feast on one-on-ones by drawing a wave of double teams.

“He has speed and when you think you’re going to try and shut off the speed move, he can counter with his power move,” Bitonio said. “That first step causes people panic and then when you panic you overset him or move too quick and he moves inside.

“If you’re perfect in your technique, you have a chance. If you take that one bad step or lean or do something wrong, that’s when he takes advantage of it.”

Bitonio was part of that 2014 draft class, going No. 35 out of Nevada. He remembers Donald from the Senior Bowl, as does Kitchens.

“He beat the center, he moved out to the 3-technique and he beat the guard and then moved to end and beat the tackle,” Kitchens said. “He has been a good player for a long time, and he continues to get better. We have our work cut out for us there.”

Baker Mayfield not panicking over early struggles: We are going to figure it out
Browns eager to see how they stack up against “proven winner” Rams in prime time