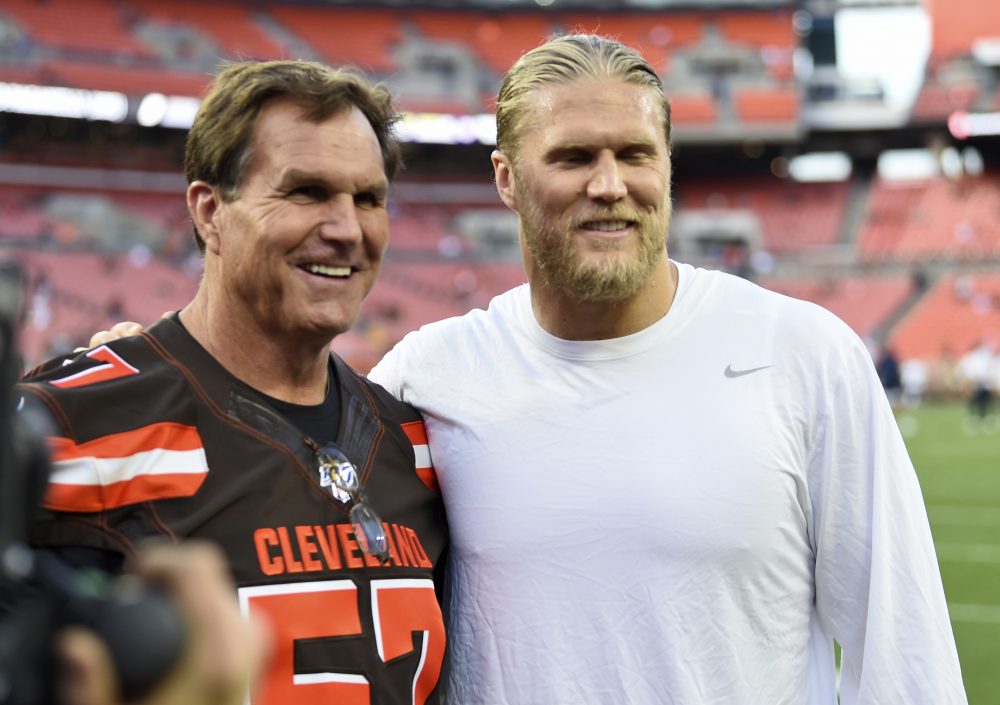 CLEVELAND — Clay Matthews looks great. He doesn’t care what he drives. He doesn’t promote himself.

In other words, he hasn’t changed.

Matthews, 63, entered the Browns’ Ring of Honor at halftime of the game against the Los Angeles Rams on Sunday night at FirstEnergy Stadium. He was joined by 20 family members and received a huge ovation from the sellout crowd.

“I’m humbled and honored,” the four-time Pro Bowl and three-time All-Pro linebacker said. “Any heights I achieved were built by standing on the shoulders of my teammates.”

He’s the first member of the exclusive, 17-man club who hasn’t been inducted into the Pro Football Hall of Fame — the eight championship teams and Joe Thomas’ record 10,363 snap streak are also in the Ring — but the Browns and Matthews’ family hope the Cleveland honor leads to a spot in Canton after he was a semifinalist again last year.

Matthews appreciates the thought but doesn’t like talking about it.

“That honor is a magical honor and, gosh, I would love for that to happen,” he said Friday of making the Hall of Fame. “But I feel extremely uncomfortable in that conversation.”

He thanked the “most electrifying fans” and dozens of teammates, listing them by nickname. His speech ran a bit long, so son Clay III was able to give him a goosebump-inducing hug on the stage in the end zone.

Clay III is an outside linebacker in his first season with the Rams after 10 years, six Pro Bowls and a Super Bowl with the Packers. He recorded a speech that was shown on the scoreboard because he knew he’d be in the locker room for the ceremony.

His dad never expected this moment. His name and No. 57 were revealed in the northwest corner between Len Ford and Bill Willis.

“I was completely surprised,” Matthews Jr. said of the call from general manager John Dorsey informing him of the honor. “There are some powerful figures in that Ring of Honor, figures that we as Browns of the ’70s, ’80s and ’90s tried to match. We got close, but we never got the Super Bowl, which they had world championships.

“When you look at that, the company, again I’m just so humbled.”

Despite the resume and prominent place in of one of football’s most famous families — brother Bruce is a Hall of Famer and nephew Jake plays for the Falcons — Clay Matthews Jr. hasn’t changed.

He’s still the guy who drove a 1975 Mercury Capri forever despite being an NFL star. He eventually auctioned the car for charity, only to give back the money to the Browns fan whose wife said they couldn’t afford it with their first baby on the way.

“So it didn’t end up being the grandiose fundraiser we thought it would be, but somebody got a little bit of interest out of it,” said Matthews, who’s content driving the car handed down by his wife when she upgraded.

When he volunteered to help coach one of his son’s teams, he didn’t tell the coach who he was and accepted a job working with the offensive line.

“Fortunately I had played defensive line a little bit in rushing the passer and I go, well, I’ll just kind of reverse engineer everything in that regard,” Matthews said.

He wound up coaching two high school teams before choosing to follow his sons’ careers rather than try to coach in the NFL.

“I’ll have to get that in the next go-around,” he said.

Matthews’ connection to Cleveland remains strong. Son Brian works here, he keeps up with the Browns and has driven by his old house in Strongsville during past visits. He said Cleveland invariably comes up when he talks football in his travels around the country, calling it a “testimony to the magic of the Browns.”

“The interesting thing is the memories that are the most vivid are the memories you had with your teammates in the locker room,” he said. “The locker room was an incredible place where you had folks from so many different backgrounds, but we all came together in a common goal.

“The other memories, which you think would have been either a big play or a big tackle or an interception or something like that, those are certainly there. But really what I remember, when I went around the city of Cleveland, how I would run into folks and they were always so knowledgeable. They were very respectful, too, but I had great conversations at the 7-Eleven or the gas stations.”

Of course, the memories also include the near-misses on the field, as he was part of three teams that lost in the AFC championship game.

“Certainly the losses, the catastrophic, one-the-verge-of-the Super Bowl, those kinds of losses, there was a lot of good in that,” he said. “Your team would get on a magical run that was just amazing. When everything was clicking right and working.”

His daughter, Jennifer, is his biggest advocate for the Hall of Fame, especially on social media. She posted a quote from Alabama coach Nick Saban, who was defensive coordinator for Matthews’ final three years with the Browns.

“Clay Matthews possessed a unique combination of being a great player, with a competitive nature, and no ego whatsoever,” Saban said. “Clay will always remain one of my all-time favorites. I appreciate and respect Clay more than he could ever know.”