Mailbag: Is Genard Avery in the doghouse? Who will return from IR? How’s the interior of the O-line doing? 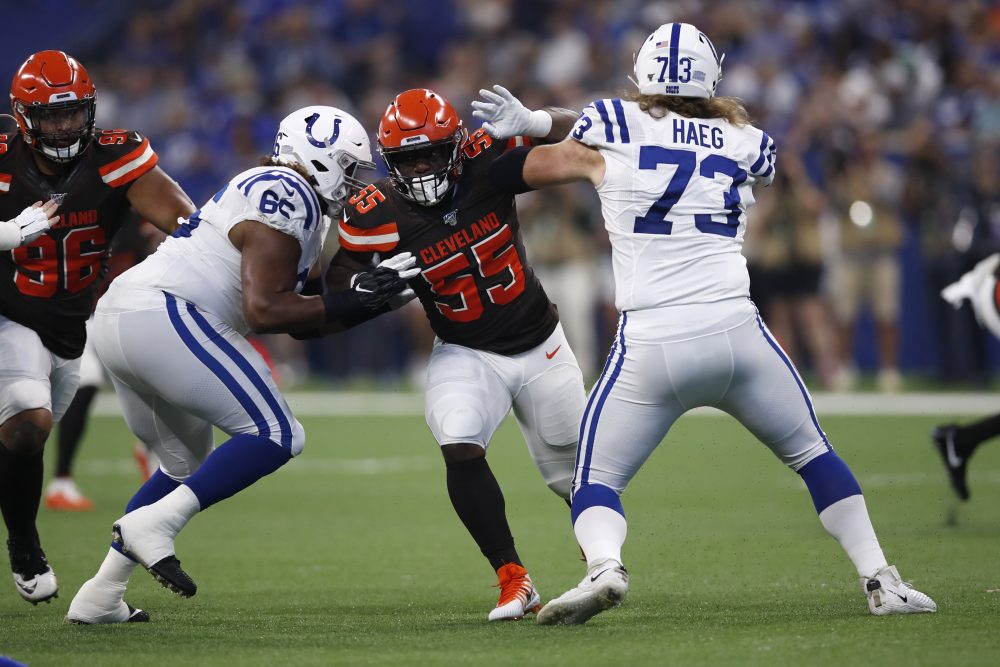 Q: Where’s Genard Avery? Is he in the (bad) doghouse? He seemed to have played well enough during his time with the team to be active on gameday. Especially with the rash of injuries.

A: The first, easy answer: on the sideline in street clothes during the games.

Now for the more complicated issues. It certainly appears Avery has gone from promising rookie — 4.5 sacks in five starts and 16 games — to the doghouse in Year 2. He was injured early in training camp, which the coaches may have attributed to showing up in less than ideal shape. I thought he played well when he got healthy — he immediately made plays in the practices against the Colts — but hasn’t been able to re-establish himself in the defensive line rotation.

The Browns believe Chad Thomas has improved in his second season and have made the choice to go with him over Avery. I only see this changing if Chris Smith doesn’t play Sunday night against the Rams after missing the week of practice in the aftermath of his girlfriend’s tragic death.

Another factor in the Avery saga is that he’s no longer considered a linebacker. The Browns will be without Christian Kirksey and likely Adarius Taylor against the Rams and chose to promote Willie Harvey from the practice squad rather than give Avery snaps there. They don’t trust him to play in space, so he is strictly a backup end used as a pass rusher.

The injured reserve rules keep changing. Once a player is on the 53-man roster the Sunday before the start of the regular season (Forbes), he is eligible to come off injured reserve as long as he misses eight games. The team can do that with two players during the season and doesn’t have to designate which players ahead of time.

So depending on the severity of the injuries, the needs of the roster and whether surgery is necessary (Njoku and Kirksey), the Browns will likely have decisions to make on whom to bring back as the season progresses.

Q: What accounts for the odd dollar amount of NFL fines for illegal hits, considering Jamal Adams’ was the same as Myles Garrett’s?

A: The league has an established fine schedule it follows for violations. So similar penalties receive the same fines. I can’t say exactly why they’re odd numbers, except that the collective bargaining agreement calls for a 5 percent increase to each fine every year. And they go up for repeat offenses.

All the money raised goes to a fund to help former players.

Q: Is it possible to tell in these first 2 games how the interior linemen are doing? Right guard Eric Kush was our main fear going in, but seems to have really played well so far.

A: I’m not an offensive line expert but am confident the inside linemen haven’t been the problem. Joel Bitonio is one of the team’s best players, center JC Tretter is underrated and Kush has held his own. The coaches’ statements support that assessment.

The line play was poor in the opener, but plenty of that can be attributed to the ejection of left Greg Robinson, the knee injury to backup tackle Kendall Lamm and the struggles of right tackle Chris Hubbard, who was forced to play left tackle. The line was much improved against the Jets, but the true test comes against Aaron Donald and the Rams. If Kush plays well against Donald, Browns fans can quit worrying about him.

Q: When either Christian Kirksey or Adarius Taylor (or both) get healthy, what is the process of returning linebacker Willie Harvey back to the practice squad? Does he have to go through waivers?

A: There’s no guarantee Kirksey will be healthy again this season — he must miss at least eight games on IR — so if the Browns are happy with Harvey he should be able to hang around as a special teamer, even when Taylor returns to health following a high ankle sprain.

But if Harvey were to be cut, as a non-vested veteran — he’s a rookie — he would have to go through the waiver system and could be claimed by any team before the Browns would have the chance to sign him back to the practice squad.

Mailbag: In what areas can Baker Mayfield improve? Who’ll be inactive today? Can Browns-Patriots be flexed to Sunday night?
Mailbag: Is Trent Williams a trade possibility? Where are Baker Mayfield’s checkdowns? Who will return from IR?