Commentary: Injury-riddled Browns actually better than they had a right to be in loss to Rams 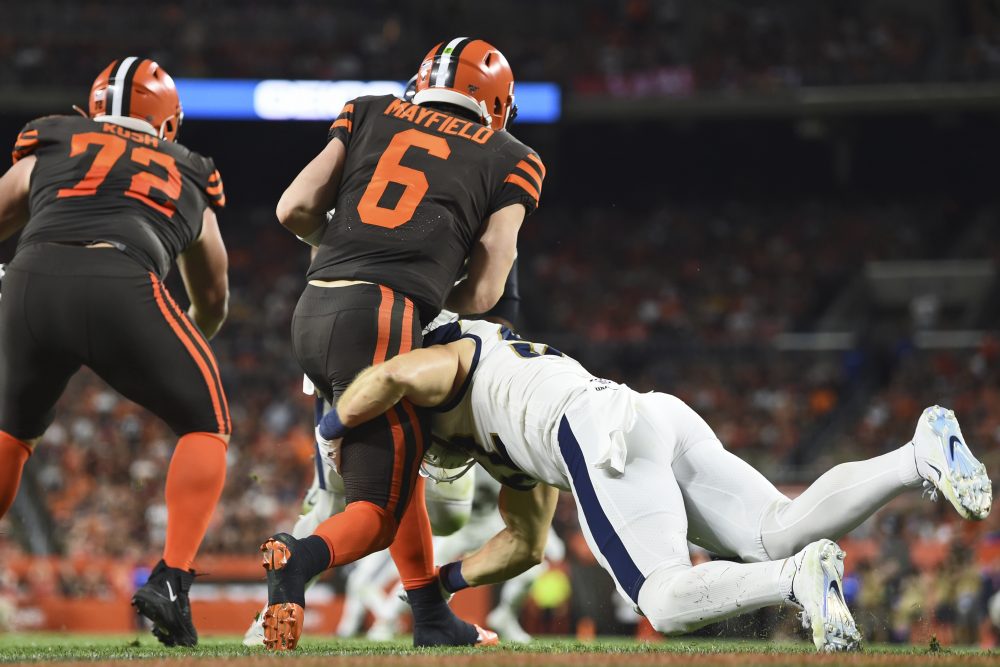 Sunday night the Browns invited America into FirstEnergy Stadium, and America rubbed its eyes at what it was seeing.

What America saw was the Browns coming within 5 yards of taking the defending Super Bowl runners-up into overtime. But instead, the defending third-place team in the AFC North lost 20-13, in a game that ended with the Browns out of time and out of luck on the Los Angeles’ Rams’ 4-yard line.

So close, and yet so Browns.

A miracle finish was there for the taking, but The Baker Boys ran out of gas.

That they were even in a position to shock the world was noteworthy in itself. The Browns played without half their starting defense, all four starters in the secondary, plus linebacker Christian Kirksey, all of whom were inactive due to injuries. This would be like the Indians playing a game without their starting infield, and their starting catcher.

However, despite that, despite having to wear those circus-like costumes they unfortunately are apparently wearing at home to try to distract the opposition, despite having to overcome their usual blizzard of crippling penalties, and despite some odd play calls by Coach Freddie, the Browns somehow won the first half, won the first three quarters, but lost the game.

But there is a silver lining, and it is this: The Browns played better in losing to the Rams than they did in beating the Jets.

There’s also this: after the game Coach Freddie Kitchens threw himself under the bus.

The Browns had first-and-goal at the 4-yard line with 43 seconds left to play, and with all three timeouts. Kitchens called for four consecutive pass plays. Three were incomplete. The fourth was intercepted.

Thanks for coming, drive safely on your way home.

“We should have run on one of those plays. Maybe on three of them,” Kitchens said.

Why didn’t he call a run?

Earlier in the game, on a key fourth-and-9 play, Coach Kitchens called for a draw play to Nick Chubb. It went nowhere.

“A bad call,” said Kitchens, from under the bus.

So their rookie coach/offensive coordinator is learning on the fly, and the season is flying by — at least the first three games of it — with the Browns off to a mediocre start.

“We have to learn how to win. Coaching. Playing. Everything,” said Kitchens.

The undermanned defense played overachieving ball for most of the night. In the first half the Rams were 0-for-8 on third-down conversions, and the Browns held them to just 11 yards rushing.

On a fourth-quarter drive, the Rams, who at times seemed unnerved by the feistiness of their hosts, ran a reverse. That’s right, the defending Super Bowl runners-up had to resort to trickery! That in itself, is a mini-victory for the Browns.

The depleted defense played hard. They forced a fumble and intercepted two passes, their first three turnovers for the season.

But it was a case of death by Cooper Kupp. The marvelously named Rams receiver, whose name sounds like a product found on the Home Shopping Network (“Available in small, medium and large!”) caught 11 balls for 102 yards and both of quarterback Jared Goff’s TD passes.

The Browns led 6-3 at the half and 13-10 after three quarters. But they play four quarters in the NFL, and in that one, the Rams shackled the Browns’ offense and outscored Cleveland 10-0. But not before the Browns’ offense coughed and wheezed its way down to the 4-yard line before three misfires and an interception sent the customers home grumpy, and Coach Freddie feeling chumpy.

“You don’t get any second-place trophies,” he said. “I’m proud of how our defense battled. But I’ve got to do a better job.”

Baker Mayfield was mediocre again, 18-for-36 for 195 yards, three sacks, an interception and a Brandon Weedenesque 64.0 quarterback rating. But Kitchens finally gave the ball to the heretofore underused Chubb, who chubbed his way to 96 yards on 23 carries.

It was a mixed bag of a game for Team Freddie. Still not playing their best, playing without a handful of starters, playing through a blizzard of penalties and shaky offensive play-calling, they gave America, and the Rams, a better game than seemed likely.

Progress is in the eye of the beholder. The final score and stats may say this game walked and quacked like a duck. But it had its moments.

Just not quite enough of them.

Rams 20, Browns 13: The breakdown — thumbs up, thumbs down, the matchups
Analysis: Freddie Kitchens should’ve run it late, should’ve thrown it earlier, needs to solve offense’s problems in a hurry