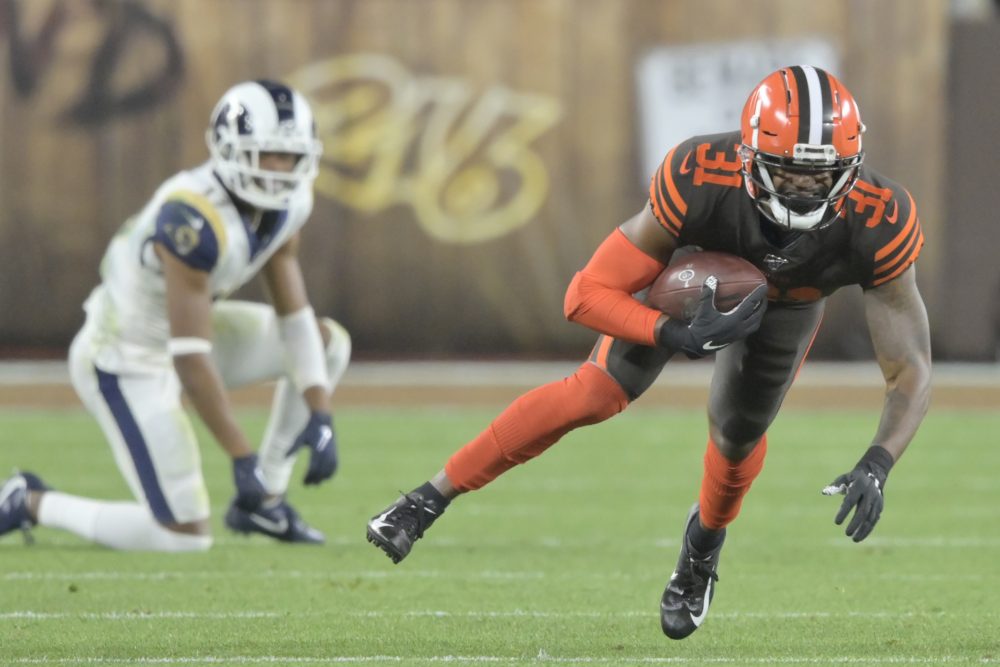 Waived by the Raiders on Thursday and claimed by the Browns on Friday.

Studying the game plan Saturday, reviewing it Sunday and playing all 66 defensive snaps and three on special teams Sunday night against the Rams.

Intercepting a Jared Goff pass — and getting tackled by teammate Joe Schobert.

Safety Juston Burris’ whirlwind weekend crossed the country and ended on national TV as he gave his new team — which is also his old team — a chance to tie the game in the final minutes.

And you thought you had a busy weekend going to The Home Depot and Bed, Bath & Beyond.

“When my coach called me on Friday, he told me I was going to play a lot,” Burris said Monday. “I didn’t know it was going to be that much, but he definitely told me.”

The timing of the Raiders waiving Burris was perfect for the Browns.

They were without their entire starting secondary due to injuries, including free safety Damarious Randall and strong safety Morgan Burnett, and backup rookie safety Sheldrick Redwine also had a hamstring injury. Coordinator Steve Wilks loves to play three safeties at a time and needed another healthy body he could trust.

Burris had been with the Browns throughout training camp and the preseason before being waived, so he knew the system. He got a refresher course when he arrived, then played free safety as the defense did its part in a 20-13 loss to the Rams.

“Me and my coaches, we probably met for like three hours right off of the plane,” he said. “I had a lot of meeting time before the game.

“I still had the basics of the defense from camp and everything. Then it was ‘just go out there and play football.’”

“He’s a professional. We had him here early on, he knows the defense, he knows the scheme,” cornerback TJ Carrie said. “Very smart, savvy guy and he’s been in the league for a couple years and he knows what it takes to come into a situation like that and be able to perform at a high level.

Burris was thrilled to be back.

“It was great. I fell in love with Cleveland when I first got here,” Burris said. “It was just great timing, great timing how everything shook out, and I was just happy to be back.”

Burris, 26, was a fourth-round pick of the Jets out of North Carolina State in 2016. He’s played 39 games, including four with the Browns last year, and got his third start Sunday.

He also got his third interception when he grabbed the Goff pass deflected by Schobert with 2:46 left.

“I just wanted to do it for my teammates,” Burris said. “We were just fighting so hard and we wanted that win. We really did. I just wanted to put us in a position to be able to go and win it.”

He was headed toward receiver Robert Woods, whom the pass was intended, when Schobert tipped it his way.

“Our coaches always emphasize running to the ball, and that’s just what I wanted to do. Good things happen when you’re around the ball,” Burris said. “Joe Schobert made a great play and I was able to get it.”

He might’ve had his first touchdown if Schobert hadn’t gotten in the way. Burris appeared to have a lane down the right side, but Schobert didn’t see him as he got up and knocked down Burris.

A reporter noted that Schobert is a solid specimen.

“Yeah, he is. He made a good tackle,” Burris said.

Clay Matthews “humbled and honored” by Ring of Honor induction, relishes connection with Cleveland
Odell Beckham Jr., frustrated by double teams and finding his way as leader with new team, reflects on memorable appearance vs. Ravens