Browns plan to take fight to physical Ravens, beat the bullies at their game 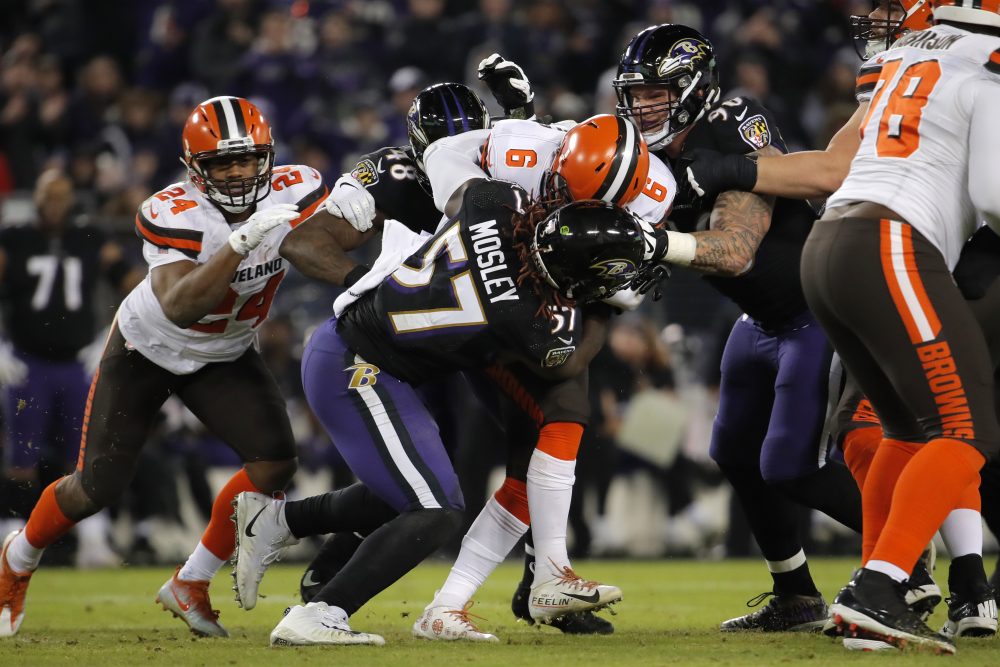 No one’s advocating excessive violence, but an eye for an eye fits when the Ravens, Steelers, Browns and Bengals do battle every season. And the defending champion Ravens have become the standard for physical play inside the rugged division.

“I know it’s a physical front and they want to bully you,” tight end Demetrius Harris said Friday. “So you’ve got to take on the bully. You’ve got to be the bully.”

The Browns (1-2) play the Ravens (2-1) on Sunday in Baltimore in a grudge match for the early advantage in the division. Defensive end Myles Garrett said the Browns must be the aggressor.

“It’s supposed to be a physical game, but we have to up that, match their tempo and exceed it, make sure they don’t bring the fight to us, we do the opposite, make sure they’re always on their heels, we’re pushing back the line of scrimmage,” he said. “If we do that, it will be a long day for them.”

Right tackle Chris Hubbard fought through a broken bone in his left foot to come back this week. In his second season with the Browns after four with the Steelers, he relishes going against the Ravens.

Freddie Kitchens joined the division for the first time last year as an assistant. The game Sunday will be his first inside the division as head coach.

He knows exactly what to expect from the Ravens.

“It will be a physical game. They always try to create that,” he said. “We want to form our identity to do the same thing.

“They create a mindset there that they are the toughest team on the field, and that is what they try to demonstrate every year. They play defense that way. Their offensive line plays that way.”

Kitchens devoted training camp to making his team tough. His practices were in full pads, included tackling and ran long.

He’s trying to catch up to Baltimore’s John Harbaugh, who won a Super Bowl with that mindset.

“That is how they have been successful,” Kitchens said. “Baltimore plays football the way it is supposed to be played.”

The Ravens had the No. 1-ranked defense last year but lost pass rushers Terrell Suggs and Za’Darius Smith and linebacker C.J. Mosley in free agency. The defense doesn’t dominate like it once did but still ranks third against the run, which pairs nicely with the top rushing offense.

The Ravens have outgained their opponents on the ground by an average of 216.7 yards to 60.3.

“They’re more like bully ball, they want to be the enforcer,” defensive tackle Larry Ogunjobi said. “But really it’s a lot of different motions and shifts to get your eyes going, but it’s really the same handful of plays. So just got to play to our keys and play football.”

The teams met to end last season, with the Ravens hanging on for a 26-24 win in Baltimore to capture the division title. They ran 47 times for 296 yards, a number that still hurts inside Cleveland’s locker room.

“They’re definitely coming out with the attitude to run the ball and play physical smash-mouth football,” middle linebacker Joe Schobert said. “We just have to buck up and be ready to hit them back.”

The Browns defense ranks 14th against the run with 102 yards a game but were stout the last two weeks against the Jets’ Le’Veon Bell and the Rams’ Todd Gurley.

“Most definitely,” safety Jermaine Whitehead said. “From the O-line style to the running backs style, you can kind of tell what they’re trying to do with the football. Even the coach, the name Harbaugh is a physical name, so you understand what he’s instilling in those players.”

Garrett put the onus on his front four to prevail in the trenches and set an example.

“We are the tone-setters for the defense and the defense sets the tone for the team,” he said. “If we’re doing well, then the team’s going to do well. If we’re not, then the offense is going to pick up the slack, which we hope, but we don’t want to have to rely on that.

“We have to go out there and be the best that we can be no matter who’s out there, the Ravens O-line or the Patriots O-line. It doesn’t make any difference.”

Lethal as a runner and improved as a passer, Lamar “Baby Vick” Jackson has respect, full attention of Browns
A lot at stake: Browns can change outlook by beating Ravens on road, moving into 1st place in AFC North