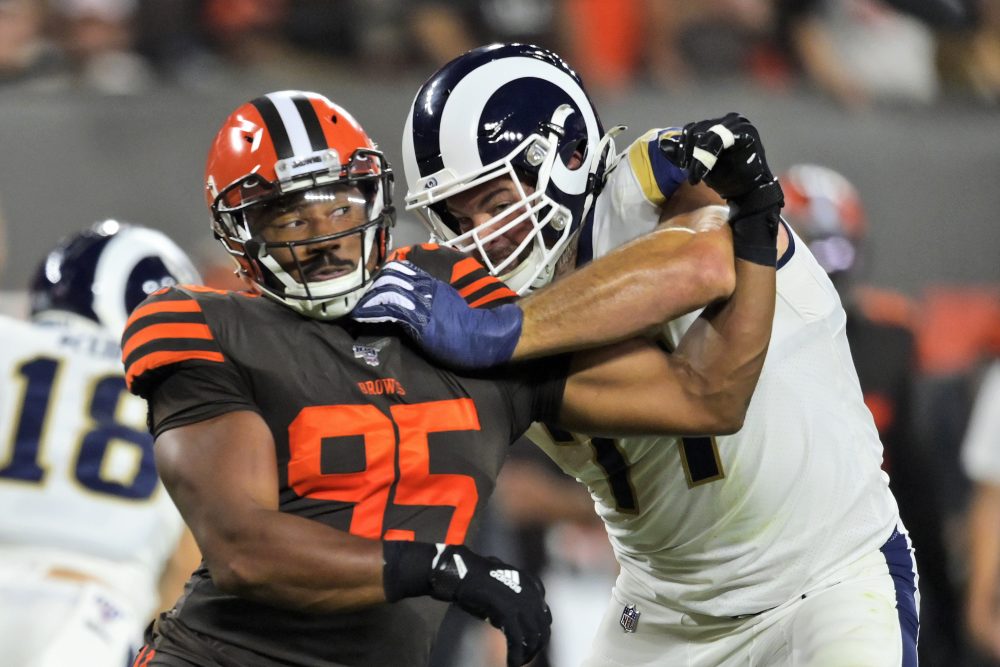 BEREA — Myles Garrett wasn’t penalized in last week’s loss to the Rams and stayed away from any hits that would draw a fine from the NFL.

It was a nice change after five penalties and $52,639 in fines after two games, but Garrett said he didn’t alter his approach to avoid the fines.

“Not at all. I’m still going to play football the same way,” he said Friday.

Garrett, the Pro Bowl defensive end, was penalized 15 yards and fined $10,527 for striking Titans tight end Delanie Walker in the helmet in the opener. He was hit with a pair of $21,056 fines for two roughing calls on Jets quarterback Trevor Siemian in Week 2.

“But strike zone, I looked at it. I hit him right in the chest. He went down. He tried to plant his foot, and when he planted his foot, his knee went up, went into me and I fell right on top of him. There’s nothing much I can do about that. If I hit him and his knee doesn’t come up and force me on top of him, I just roll right over him. I mean, it’s football, though. That kind of contact is sometimes unavoidable.”

Garrett, who’s second in the league with six sacks, is frustrated by all the protection given to quarterbacks.

“You’ve got to defend us, as well,” he said. “You can’t expect us to try to do every single thing we can to get out the way of them and potentially risk hurting ourselves just trying to keep him from ever touching the ground harder than laying a pillow on a bed. But I’m not going to change my style of play and hopefully I don’t get any more fines for it.”

Garrett appealed all three fines but hasn’t heard back from the league. He understands that is the cost of doing business at his position in today’s NFL.

“That’s why it doesn’t bother me too much,” he said. “Many guys have gotten it, deservedly or undeservedly, and so if I’m going to go out there, make a lot of plays and at the back end I might get an unnecessary roughness every three or four games. I won’t make it a habit, it’s not something I want to do, but if that’s what happens and I’m still making big plays consistently, then I guess that’s my toll.”

Penalties are up across the league overall, but he expects them to subside as the year progresses.

“I think it’ll start to cool down. I know the head of officials wasn’t having it, and he didn’t like how many penalties there were,” Garrett said. “And Tom Brady said something about it, and you know once he says something, it’s got to go. So seeing that, I know that those are going to slowly decrease and it’s going to get a little bit more regulated, so the game can flow a little bit better.”

Hubbard missed last week’s game against the Rams with what he called a small fracture in his left foot but returned to practice Thursday and was able to go again Friday. He was officially listed as questionable on the injury report.

“Felt good. Ready for Sunday,” he said. “Just can’t wait to get back out there.”

Hubbard said he heard a pop in his foot Sept. 16 against the Jets in the fourth quarter. He finished the game but spent the rest of the week in a walking boot.

He said he wasn’t anxious about testing the foot this week.

“His veteran presence, just him being out there is always just kind of a breath of fresh air,” he said. “He’s a guy who’s not going to complain about it, not going to talk about it, he’s going to keep his head down and work and try to get back. I know what he’s dealing with is significant.”

The Browns will likely be without three starters in the secondary.

Veterans Terrance Mitchell and TJ Carrie would again start at corner, with Jermaine Whitehead at safety.

“My ultimate job is to get the best players on the field,” he said. “That is something that you struggle with as a coach sometimes. You have to weigh the good and the bad and see where it is.”

Backup tackle Kendall Lamm (knee) was the only player ruled out.

Tight end Demetrius Harris called Chiefs tight end and former teammate Travis Kelce this week for tips on how to play the Ravens. The Chiefs beat Baltimore 33-28 on Sunday in Kansas City.

“I kind of looked at this year’s game and then last year’s game and with the advice Kelce gave me and stuff like that, I know how to play and I’ve played this defense before,” said Harris, who was part of the Chiefs team that beat the Ravens last year.

With David Njoku on injured reserve with a broken wrist, Harris was the No. 1 tight end against the Rams, playing 65 of 72 offensive snaps. His lone catch was a 2-yard touchdown.

Harris’ other target was on third down from the 4-yard line on the final possession. Safety Taylor Rapp had good coverage on the incompletion in the back of the end zone.

“My mindset, when the ball’s in the air, if the quarterback throws to you, you’ve got to make the quarterback right,” Harris said. “It doesn’t matter where it’s at. You’ve just got to find a way to come up with it. I’ve beaten my head over it a little bit because I feel like I can make that catch.”

Linebacker and captain Christian Kirksey hasn’t decided whether to have surgery on a chest injury that put him on injured reserve last week.

“I’m still talking to some people about what’s the best solution,” he said.

If he doesn’t have surgery, that would seem to give him a chance to return this season after missing the mandatory eight games that come with a trip to IR.

“I can’t make no predictions,” he said. “I’m just being here for the team, wherever they need me to be, that’s all I’m focused on right now.”

He said there’s no timetable for making a decision about surgery and wouldn’t answer when asked if his pectoral muscle was partially torn. He was injured against the Jets on Sept. 16.

“I know the play, but that’s in the past, I’m moving forward from it,” he said.

Kirksey was off to a strong start with 11 tackles through two games. After playing every game in his first four seasons, he was limited to seven last year and finished on IR with a hamstring injury.

“It’s tough to not be playing, but at the end of the day I’m just trying to root on my guys,” he said.

“Heavy guy, savage in the double team game and a little lazy on the pass rush to me,” Richardson said. “But, other than that, good offensive lineman.”

** Andrews was teammates with Browns quarterback Baker Mayfield at Oklahoma. He attended Mayfield’s summer wedding and got him tickets for Sunday.