A lot at stake: Browns can change outlook by beating Ravens on road, moving into 1st place in AFC North 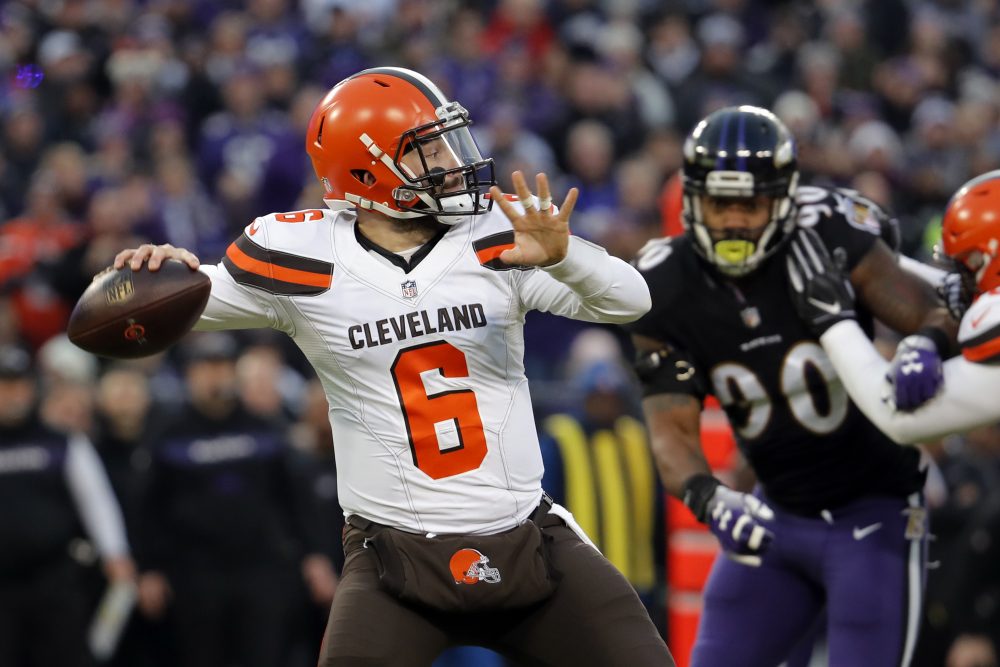 Room on the bandwagon? More by the day.

Favorite to win the AFC North? Not anymore.

The utterly unimpressive 1-2 start has turned the perception of the Browns on its head. When the games started to count, the struggles got real and the criticism followed.

A win Sunday in Baltimore would flip the script back.

The Browns would be 2-2, tied with the Ravens atop the AFC North and in possession of the early tiebreaker with the rematch in Cleveland on Dec. 22. It’s a universe away from 1-3 and two games behind in the division.

“This game right here says a lot,” right tackle Chris Hubbard said. “It’s going to mean that we’re on top of the division.”

“It would be huge for us to get a win,” middle linebacker Joe Schobert said.

Coaches and players love to refer to division games as counting for two. You win, your rival loses and you have an edge in the division record. This one feels like it’s worth a lot more.

The Browns have yet to look like a team capable of ending a 16-year playoff drought. They have three more games after the Ravens before the schedule lets up. The new coach and second-year quarterback are under fire.

And the Ravens clearly aren’t going to step aside so the Browns can take the division title they secured last year with a 26-24 victory over Cleveland in the finale.

“Everything we do in this division goes through Baltimore,” coach Freddie Kitchens said. “They are the defending champs. We are looking forward to the challenge.”

The players realize what’s at stake.

“Especially dropping two at this point, this is the most urgent I’ve seen our team and I think we’ve got a mission and a focus this week like none other,” safety Jermaine Whitehead said. “Being close ain’t good enough, so we want to go out and get the “W” this week to make ourselves feel a lot better.”

Receiver Odell Beckham stressed he’s “not panicking at all” but knows this game carries a lot of weight.

“We want to win now, you want to be able to go down the backstretch not having to win each and every game, you want to be able to play the games out without every game being a must-win,” he said. “It’s going to be a true testament to this team after coming off a tough loss at home to the Rams to go in the division in Baltimore and win a game. So I think that’ll say a lot about this team, the way that we fight, the character of this team.”

The Browns spent the week insisting — trying to convince themselves? — they’re on the verge of an offensive breakthrough despite averaging 16.3 points a game. Nothing would help the confidence more than a pile of points in a victory that could springboard them toward a run to the playoffs. The Ravens present the opportunity.

They lost pass rushers Terrell Suggs and Za’Darius Smith and linebacker C.J. Mosley in free agency and don’t have the same dominant persona. That’s especially true against the pass, ranking 27th with 290.3 yards allowed a game.

Defensive coordinator Don “Wink” Martindale joked he lost 4 pounds from vomiting while watching the film of the 33-28 loss to the Chiefs last week. His defense gave up 503 yards.

Mayfield, who threw three interceptions in the finale last year, needs to take advantage. He hasn’t looked the same this year, throwing five interceptions and ranking near the bottom of the league with a 70.3 passer rating.

He’s been overshadowed by peers Patrick Mahomes in Kansas City and Lamar Jackson with the Ravens, and is under pressure to live up to his status as the No. 1 pick and the record-setting rookie season of a year ago.

“I am not worried about Baker. Baker is going to get right,” Kitchens said.

The Mayfield-Jackson comparisons will increase as their careers progress. They are Heisman Trophy winners and first-round picks playing in the same division, and Mayfield liked the idea of going head-to-head for the next 15 years.

“That would be great, he said.

Cornerback TJ Carrie referred to division games as a “chess match” because both teams know each other so well. He said it’s up to the coaches to outscheme the opposition and for the players to capitalize on those plays.

Kitchens took the blame for the slow start and questionable play calling and has a lot of eyes on him as a first-time head coach. Defensive end Myles Garrett was having none of that, instead pointing the finger at his defense.

“He’s saying, ‘Blame him,’ and I appreciate it and it’s a good sentiment, but looking at the Patriots, they haven’t given up an offensive touchdown in a three-game span going into four,” he said. “Why aren’t we doing that? We have that same kind of ability, we need to be achieving those same kind of things.

“We can’t be saying, ‘The offense needs to pick it up.’ We need to pick it up. You have to do whatever you have to do to win games. If we have to hold ’em to three, six, or however many, just field goals to get the game, we’ll do that.

Browns plan to take fight to physical Ravens, beat the bullies at their game
Freddie Kitchens says choke of Odell Beckham Jr. doesn’t belong in game, praises him for hustle, helping teammates in win over Ravens