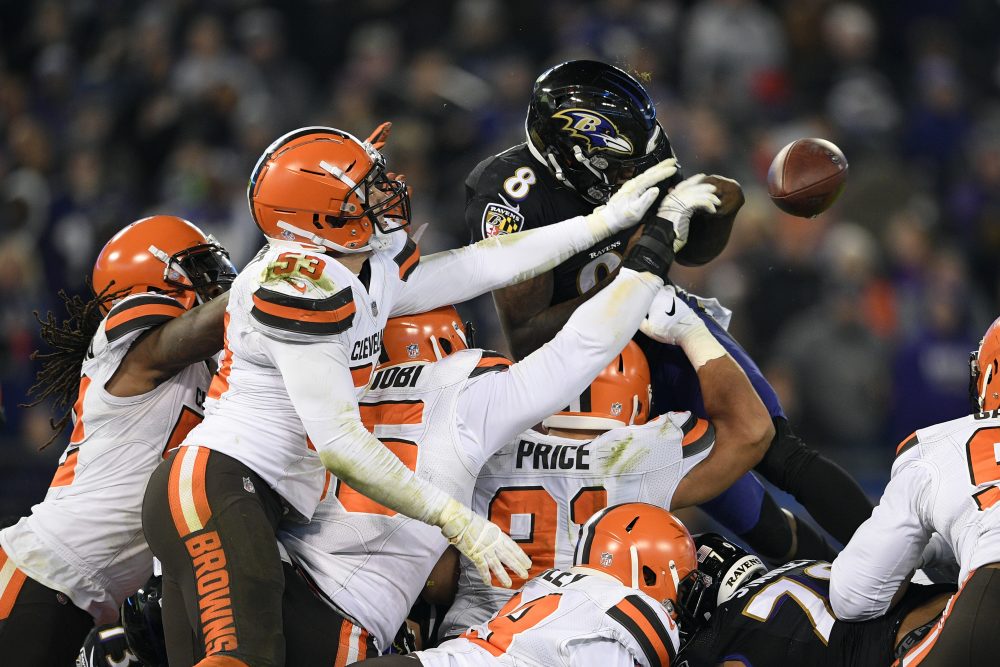 A PLAN FOR THE MAN

The Browns said a lot of great things about Ravens quarterback Lamar Jackson during the week: a dynamic runner, an improved passer with a strong arm, a reincarnation of highlight machine Michael Vick.

“A lot of people have been talking about how he’s not a quarterback, not a pure passer, but he’s in this league for a reason,” cornerback TJ Carrie said. “He can pass that rock and he definitely has the arm to get it down the field to his deep threats. So you can’t just focus on the run no more.”

“It is all of the same. It is a college offense,” he said. “It is really what he did at Louisville. We are preparing well for it. We have seen that offense before so I am very excited to go against the offense. I am very pleased with where we are right now with our game plan.”

Jackson, who’s rushed for 172 yards, a 6.4 average and a touchdown. has thrown seven touchdown passes and no interceptions and has a 113.9 passer rating. He had a perfect rating against Miami and ranks in the top 10 in most passing categories. Yet he still hasn’t convinced everyone he can beat a quality defense with his arm. The Dolphins have the 32nd-ranked defense, the Cardinals rank 30th and the Chiefs 24th. The Browns, who are 10th, believe they’ve underachieved, are better than their predecessors and know what’s required to slow down Jackson.

“Even though he doesn’t want to be called a running back, that’s his main talent right now, his elusiveness outside of the pocket, and then getting the ball off, as well,” defensive end Myles Garrett said. “You have to cage this guy, make sure he doesn’t scramble up the middle, definitely doesn’t scramble up the middle, try to get him running to his left, throw off-balance and try to keep him in the pocket if we can. If we can’t, just funnel him to his weaker side throwing, make sure he’s not as effective.”

The Ravens’ league-leading run game (216.7 yards a game, 34 first downs) is driven by running back Mark Ingram with power boosts from Jackson and backup running back Gus Edwards. Ingram, signed as a free agent in the offseason, leads the NFL with five rushing touchdowns after three against the Chiefs last week and is fifth with 257 rushing yards and fourth with 5.98 an attempt.

“The way he runs the ball, he still looks young like a rookie, kind of, with fresh legs,” Jackson said. “He’s very explosive, quick.”

Edwards, undrafted in 2018, is averaging 4.4 yards a carry on 27 attempts and had a long gainer negated by a penalty last week. In 137 attempts as a rookie he had only one carry that lost yardage, 1 yard.

“I have said it time and time again that there is nothing more demoralizing to a defense than 15-, 20-, 25-yard chunks right there,” Wilks said. “They are going to rotate them in and out, and we are going to have to do a great job of stopping the run and try to get them into third-and-long.”

“They’ve got a nice system over there for Lamar, actually, downhill runners, strong, the offensive line is very, very physical, second to none in double teams in running the ball, honestly,” defensive tackle Sheldon Richardson said. “We’ve got our work cut out for us. This is a good test for us.”

In NFL parlance, 13 personnel means one running back and three tight ends on the field. This could be Sunday the 13th for the Browns defense.

The Ravens go big often, using the tight ends as blockers and receivers. As a group they lead the league with 33 catches, 389 receiving yards and three touchdowns. Mark Andrews, teammates with Baker Mayfield at Oklahoma, is Jackson’s top target with 19 catches for 235 yards and two touchdowns. Thirteen — there’s that number again — of the catches went for first downs, and six for at least 20 yards. He’s questionable with a foot injury but said he’ll play.

“He is a dynamic tight end,” Wilks said. “He is definitely coming into his own. They find him on third down and they find him in the red zone. He is just as good as any tight end that we are going to see in this league.”

“We do have a lot of safeties and we play our bigger safety personnel packages when teams get into their 12 and 13 personnel,” middle linebacker Joe Schobert said. “It’s just better for run and pass. They’re used to covering in space and they’re used to being down in the box and making plays against the run. You have guys like Whitehead who’ll stick his head in there no matter what. We have a lot of talented individuals that can do a lot of things.”

When the tight ends aren’t running routes, Whitehead expects the Ravens to use them to help tackles Ronnie Stanley and Orlando Brown Jr. deal with ends Garrett and Olivier Vernon. Garrett isn’t fretting that matchup.

“I don’t think anybody’s going to be scared of going up against any tight end,” he said. “I’m thinking nobody who catches routes is going to be able to block me.”

The most obvious progress made by Cleveland’s offense has been in the run game. Nick Chubb rushed 23 times for 96 yards last week against the Rams, helping take some pressure off Mayfield.

“We had a good plan. Sometimes you just execute cleaner,” center JC Tretter said. “We were able to move guys and get Nick up to the second level and let Nick do what he’s been able to do, and that’s make people miss and get extra yardage.”

“I still see two big guys in front of me,” left guard Joel Bitonio said. “They have Michael Pierce and Brandon Williams who are some of the best run-stopping D-tackles in the game.”

“They are big inside and active, the first thing that you just notice,” coach Freddie Kitchens said. “They are always finishing plays, hunting the ball and things like that that good defensive lineme. They play with good sound technique from a leverage standpoint and then they fill the gaps that they are supposed to be in.”

Chubb, who has 233 rushing yards, a 4.0 average, a TD and 11 catches for 81 yards, has quickly gained admirers across the league in only his second season.

“Chubb is doing a great job. He is a factor,” Ravens coach John Harbaugh said.

The play call on fourth-and-9 vs. the Rams — whether it came from Kitchens or was changed by Mayfield — received the attention because it was so unusual and failed so miserably. But going for it was an aggressive decision by Kitchens, who has abandoned the swashbuckling persona that helped make the offense go last season.

Every week he had a new wrinkle — the full-house backfield, receiver Jarvis Landry throwing, deceptive ballhandling by Mayfield — that ignited the offense and kept defenses guessing. Kitchens has a lot more to lose as the head coach and has been conservative this season. The matchup with the Ravens is a great platform to dig deep in the playbook, as the offense continues to search for a spark and the Browns might need to score often to keep up with the Ravens.

Harbaugh proved last week against the Chiefs he’s not afraid to pull out all the stops. He tried three 2-point conversions (0-for-3) and went for it on fourth down four times, converting three. He will likely back off this week because the Browns don’t have Kansas City’s high-powered offense, but Kitchens could learn something from the aggression.

Record of Ravens coach John Harbaugh vs. the Browns in Baltimore

Points scored by the Browns this season, tied for 27th in the NFL

Points scored by the Ravens, best in the league

Yards of offense by the Ravens, the second-most in NFL history in the first three games of a season (New England had 1,621 in 2011)