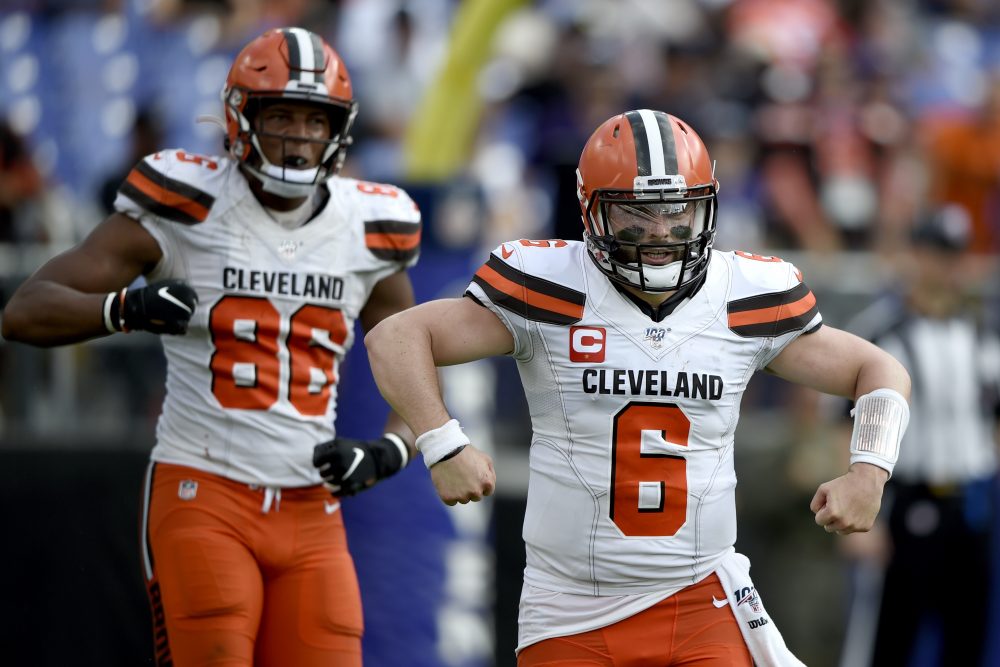 BALTIMORE — Baker Mayfield had a simple explanation for the improvement in play calling by coach Freddie Kitchens.

“I played better, made it easy on him,” he said. “Anytime your quarterback sucks, it’s probably pretty hard to call plays.”

Mayfield snapped out of his early season funk in a big way Sunday and the Browns piled up 530 yards as they got an important 40-25 victory over the Ravens.

He was 20-for-30 for 342 yards, a touchdown, an interception, a sack and a 102.4 passer rating. The yards and rating were season highs and he’s thrown for 300 yards in all three meetings with the Ravens.

During the week Mayfield disputed the notion he was leaving the pocket too early, but he seemed to make a concerted effort to hang in there against the Ravens (2-2). The patience paid off, as the much-maligned line protected him and he was able to find soft spots in the Ravens secondary.

Receiver Jarvis Landry had eight catches for a career-high 167 yards before missing the fourth quarter with a concussion, and third tight end Ricky Seals-Jones caught three passes for 82 yards and a touchdown for the Browns (2-2).

Mayfield wouldn’t acknowledge he felt more comfortable than in the previous three games, when he totaled five interceptions and a 70.3 rating.

“Nah, I just did my job,” he said. “Just got the ball out of my hands, in the playmakers’ hands like I’ve been talking about, like I needed to do.”

Mayfield usually talks openly about maintaining the chip on his shoulder and finding motivation from critics and doubters. He wouldn’t give ESPN analyst Rex Ryan the satisfaction.

“Absolutely not,” he said when asked if Ryan’s criticism fueled him. “Rex Ryan does not get any credit for this week’s win. No.”

Ryan wore a brown suit and orange tie during “Sunday NFL Countdown,” an acknowledgement of his back-and-forth with Mayfield during the week.

“In the wise words of Freddie Kitchens, if you don’t wear orange and brown you don’t matter,” Mayfield said Wednesday.

Ryan had called Mayfield “overrated as hell” and a “one-read guy.” He didn’t back down Sunday.

“Baker Mayfield better be happy I’m not in the black and purple today on that sideline because he’d be in trouble,” said Ryan, who was an assistant coach with the Ravens from 1999-2008, including the final four years as coordinator.

Kitchens said it was “asinine to even say” Mayfield is a one-read quarterback, but Ryan defended the analysis and showed examples from last week’s loss to the Rams.

“I am just basing things on fact and what I see,” Ryan said. “I only had 30 years of coaching experience, 20 in the NFL, so I can see where he would question me.

“He’s not seeing it. He is seeing one guy and that is it. He is going to go out and improvise.”

The stubborn Mayfield might never admit it, but maybe he saw the same things on film. Because he got to his second read on the touchdown to Seals-Jones, didn’t bail from the pocket and didn’t force the ball to superstar receiver Odell Beckham Jr., whose only two catches came in the fourth quarter.

“Just had my eyes in the right place,” Mayfield said.

“He was consistent in what he was trying to do,” Kitchens said. “He made some good throws.

The line struggled at times during the 1-2 start but held up well against a Ravens front missing Pro Bowl tackle Brandon Williams, who was inactive with a knee injury. If Mayfield made the decision to believe he’d be protected if he stayed in the pocket, his faith was rewarded.

“The O-line played great,” he said, also referring to the 165 rushing yards and career-high three touchdowns by Nick Chubb.

The offense averaged only 16.3 points over the first three games, falling well short of expectations. Mayfield’s decision-making and accuracy were off, the play calling was hit-or-miss and the unit failed to maintain consistency. Mayfield had completed just 57 percent with three touchdowns and five interceptions.

He and the offense looked more like themselves Sunday.

“It sets the standard for our offense of how we need to play,” he said. “The win’s great. But I hope everybody keeps the same energy.

“Threw us in the trash, we won’t forget it.”

He hasn’t forgotten how to carry a grudge, or pick a fight. He and troubled free agent receiver Antonio Brown traded insults on social media over the weekend, but Mayfield declined comment.

“Absolutely not,” he said. “If you don’t wear orange and brown, you don’t matter.”

Rex Ryan wears orange and brown but still not a fan of Baker Mayfield
Browns 40, Ravens 25: Cleveland gets statement win on road, moves atop AFC North for 1st time since 2014