Browns 40, Ravens 25: The breakdown — thumbs up, thumbs down, the matchups 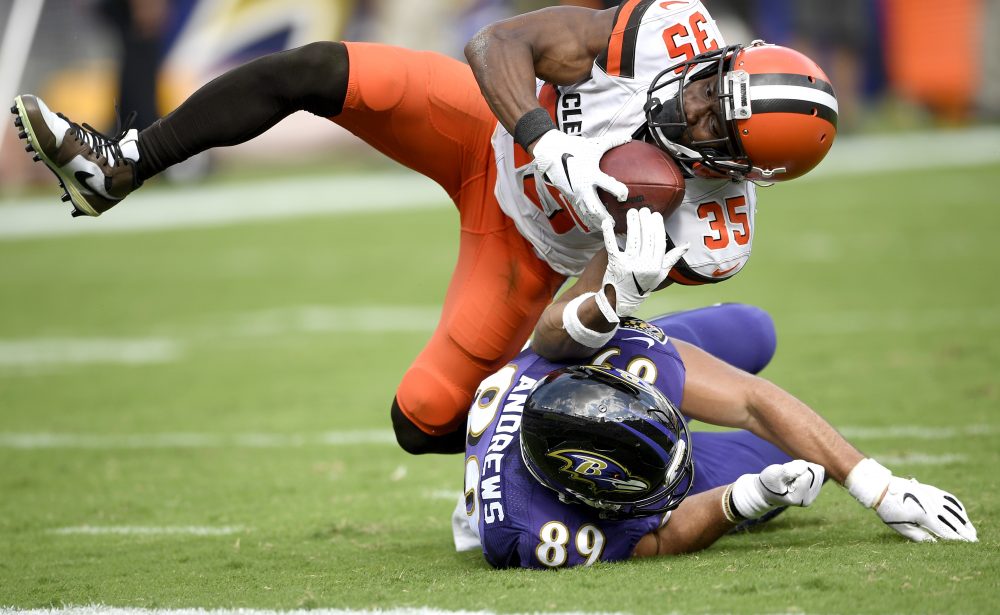 The Ravens didn’t have a turnover through three games. Whitehead caused three Sunday.

Not bad for a backup.

Whitehead forced a Mark Ingram fumble recovered by end Chad Thomas. He made an acrobatic interception of a deep pass down the middle from Lamar Jackson to tight end Mark Andrews. He hit Jackson’s arm, causing the ball to float into the arms of tackle Devaroe Lawrence.

Whitehead continues to establish himself as a key contributor on a defense that believes it’s great. He’s making it hard for Morgan Burnett (quadriceps) to regain his starting spot.

“Jermaine is a helluva player,” free safety Damarious Randall said. “I’ve been knowing that for a while now. I’m proud to finally see him convert on some plays up in the game and make some helluva game-changing plays. He’s just a guy that comes in and plays multiple positions and does multiple things for your defense and when you’ve got guys like that out there and they’re so versatile, you can do a lot of different things with them.”

This isn’t a slight to the Browns offensive line, which played its best game and should shut up some of its critics. But this isn’t the same Baltimore defense of the past, and that starts up front.

The Ravens, who were missing Pro Bowl tackle Brandon Williams (knee), allowed 530 yards as the Browns threw, ran and made big play after big play. Baker Mayfield was sacked only once, in the first series, and not hit again, according to the official stats. Nick Chubb had no trouble reaching the second level on runs, especially when the Browns attacked the edges of the Ravens line. The 88-yard touchdown run was an obvious example, as no one laid a hand on Chubb.

“I told the guys we had the brand to protect. For a lot of reasons, we did not go out there and do it today as well as last week,” nose tackle Michael Pierce said. “We’ve got to produce up front. We haven’t gelled yet. I would like to see that hurry up and come along.”

The 88-yarder came at a critical time, silencing the crowd that had grown loud again following a Ravens touchdown and 2-point conversion and giving the Browns a 30-18 lead. But Chubb’s most impressive run was a 14-yard touchdown in the third quarter. He started right and cut all the way back to the left, making four defenders miss, including one who lost his helmet while trying.

“I was just rolling. I made a play,” Chubb said. “I broke a couple tackles, but it starts with the O-line. They have to give me some kind of opening, which they’ve been doing a great job of. I’ve just got to finish the run and get in the end zone.”

Chubb was motivated by the unsuccessful fourth-and-9 draw the week before against the Rams. While coach Freddie Kitchens was blasted for the play call, Chubb blamed himself for not making it work.

“I wasn’t going to let anyone tackle me,” he said. “Honestly, I had nightmares last week when I got hit on fourth-and-9 because one man tackled me, and that kind of drove me this week to not let one person tackle me.”

The 88-yarder was also special, as he broke through the line untouched and sprinted away from the defense.

“He can roll,” Mayfield said. “I think people underestimate his speed. Once he gets to that second level, he’s got true breakaway speed. People say he’s a power back, which he is, it takes more than one guy to bring him down, but he’s got that speed to make a play like that.”

Years since the Browns had a 300-yard passer, 100-yard receiver and 100-yard rusher in the same game — a 51-45 win over the Bengals on Sept. 16, 2007. Quarterback Baker Mayfield, receiver Jarvis Landry and running back Nick Chubb turned the trifecta Sunday, while Derek Anderson, Braylon Edwards and Jamal Lewis did so back then, with Kellen Winslow adding a second 100-yard receiver. The Browns also hadn’t scored 40 points in an AFC North game since then.

“I just look at it as at least they’re talking. Because, I mean, if you’re sh— they’re not going to talk about you, so obviously we’ve got something going on over here. So we’re just going to continue building together and we’re going to continue to just keep building toward our goals.” — Browns free safety Damarious Randall, on criticism from ESPN’s Rex Ryan and others

This is how it’s supposed to look. Baker Mayfield completing passes, receivers running free and Nick Chubb scoring touchdowns. And it was accomplished with Odell Beckham Jr. mostly as a decoy.

The Ravens put up 395 yards but had three turnovers and failed on a fourth down that could’ve been a huge play. Lamar Jackson is dangerous but wasn’t lethal.

Four sacks, three turnovers and 25 points is a good day’s work on the road against the league’s No. 1 offense. Cleveland’s depth is impressive, with four starters down with injuries.

The Ravens missed defensive tackle Brandon Williams and cornerback Jimmy Smith, but even at full strength they’re not as scary as they used to be. They missed a ton of tackles and had too many breakdowns.

Kicker Austin Seibert was perfect again, punter Jamie Gillan had only a 37.7-yard net and the return game was non-existent.

Baltimore is among the league’s best and played like it.

Freddie Kitchens needed a win and got it. His team was prepared, his game plan on point and his play calling much improved. It was good to see him dip into his bag of trick plays.

John Harbaugh fell to 19-4 against the Browns, including 10-2 in Baltimore. The Ravens lacked their usual discipline on defense.