Browns 40, Ravens 25: Cleveland gets statement win on road, moves atop AFC North for 1st time since 2014 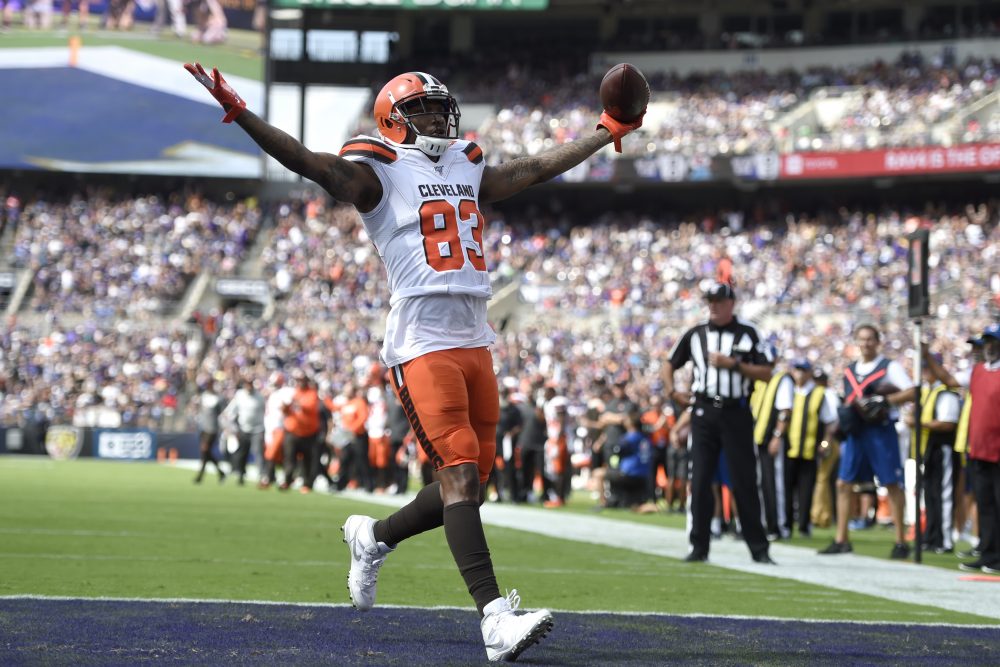 BALTIMORE — The Browns were on the ropes when they arrived in the land of crab cakes.

They had lost two of three to open the season. They were surrounded by doubts and consternation. Their quarterback and coach were being ridiculed.

They left town on top of the AFC North.

They hadn’t been in first place since November 2014.

The 40-25 victory Sunday over the Ravens has the potential to be a turning point and already qualifies as a turnaround. It followed a week of receiver Jarvis Landry telling everyone the Browns are “going to be a great team.”

“That’s the best part about this team is we know how good we can be, but that’s the frustrating part about how we started,” said quarterback Baker Mayfield, who went 20-for-30 for 342 yards, a touchdown, an interception, a sack and a 102.4 rating. “We knew how good we could be, we just needed to do our job, and that’s what our guys did this week, focused, head down and worked.”

Mayfield stayed in the pocket and found a comfort zone. Landry and tight end Ricky Seals-Jones carried the offense early and running back Nick Chubb put away the game with a dominant second half.

The Browns didn’t just get a win, they made a statement.

The Browns and Ravens are 2-2 after the first quarter of the season, but the Browns are on top in the division because they own the early tiebreaker. The top contenders meet again Dec. 22 in Cleveland in Week 16.

“Every win is a great win. But we know it’s a divisional win. We understand that,” Chubb said. “We’ve got to build on top of it and keep rolling and stack some wins.”

“It’s great. That’s what we expect to do,” receiver Odell Beckham Jr. said. “We just came out and did it in a tough environment in Baltimore, on the road, division game, so it’s a big start for us.”

The Browns, who are 2-0 on the road for the first time since 1994, played by far their best game of the season.

They had a smart plan on offense and executed it with 530 yards. They withstood multiple rallies from the Ravens — and an on-the-ground choke of Beckham by cornerback Marlon Humphrey. They resembled the team that entered the season with playoff expectations and Super Bowl dreams.

They did it with Beckham being held to two catches for 20 yards. The first reception came midway through the fourth quarter on a 3-yard hitch. He was targeted seven times.

He rushed 20 times for 165 yards, including three second-half touchdowns. The backbreaker was an 88-yarder on first-and-15 after the Ravens had cut the lead to 24-18 with 9:51 left in game.

He took the pitch to the right, got a block from right guard Eric Kush, wasn’t touched at the line and ran away from the defense. Kush said that was one of the team’s favorite plays during the week.

“It’s a lot of fun when you see the running back just zoooom running down the field,” he said.

Answering the Ravens’ touchdown and 2-point conversion was huge.

“It was important as hell,” Kush said. “We said, ‘Man, we’ve got to drive down this field and score,’ and to do it that quick, it was fun.”

Chubb, the No. 35 pick in 2018, has been the best and most consistent player on offense through four games. The Browns have turned to him more as they try to straighten out the passing game.

“Obviously he’s an unbelievable player,” Mayfield said. “You just open up a hole for him, he’s going to make a play.”

Chubb added 14- and 2-yard touchdowns in the third quarter. The short one was set up by a 29-yard shovel pass to Landry in which he had the option of pitching to Beckham as they ran down the field.

Landry didn’t play another snap because of the concussion, but the play was an example of the creativity play caller Freddie Kitchens rediscovered after a conservative start in his first time as a head coach. He also had Beckham throw deep — it was incomplete — after a double reverse.

“We’ve got a bunch of guys that are more than capable of making plays at all times,” Mayfield said.

The defense allowed 395 yards but didn’t let electrifying and elusive quarterback Lamar Jackson dominate and forced the first three Ravens turnovers of the season. Jackson was 24-for-34 for 247 yards, three touchdowns, two interceptions — stopping an NFL-best streak of 248 passes without one — four sacks and a 96.1 rating. He rushed nine times for 66 yards.

“We’re built to win on defense, whether y’all believe it or not,” defensive tackle Sheldon Richardson said. “We take pride in that. The hype was all about the offense in the offseason and all that, which is good, we wanted y’all to sleep on us. This is what we plan on doing week-in and week-out, point blank, no hype, no boasting, it’s what we bring to the table.”

The Browns were waiting for, and expecting, a game like this. They finally have the chance to exhale — and take off.

“Y’all already know what we’re capable of,” free safety Damarious Randall said. “We just played complementary football. We literally came in here with a game plan and we stuck to it four quarters and fought hard every play and the scoreboard showed it.”

Baker Mayfield snaps out of funk, finds rhythm, beats Ravens … won’t give any credit to Rex Ryan
Browns shut up critics with performance they knew was in them all along