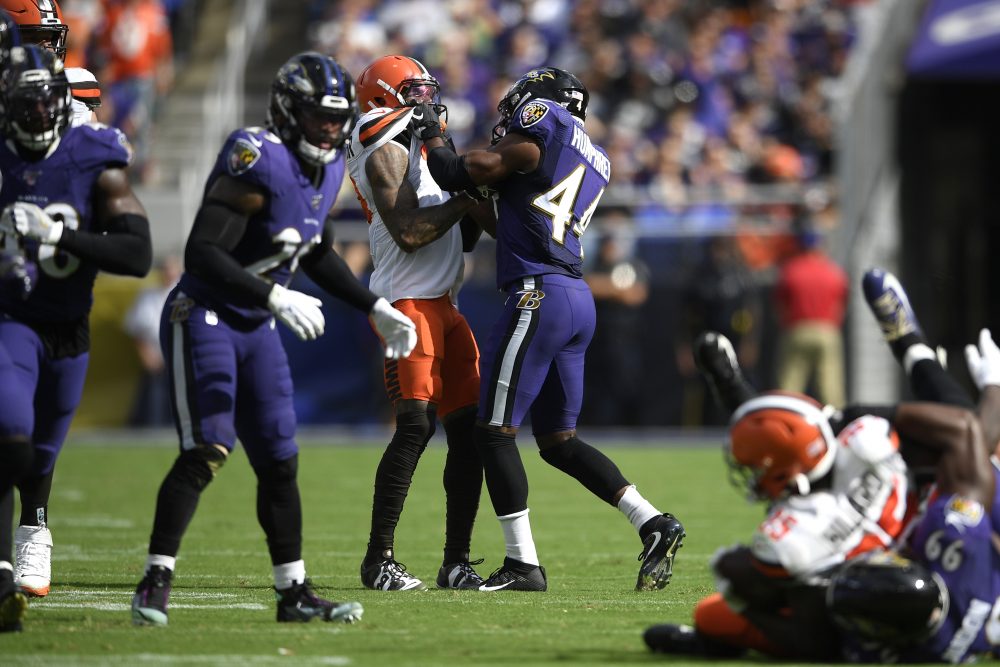 BALTIMORE — The fight included a punch, a choking and four personal fouls.

The trouble appeared to start when Browns receiver Odell Beckham Jr. punched Ravens cornerback Marlon Humphrey on Sunday while blocking during a screen pass to running back Dontrell Hilliard. It escalated when Humphrey took Beckham to the ground and kept a hand around his neck, prompting Jarvis Landry to rush in and try to pull Humphrey off Beckham.

Coach Freddie Kitchens didn’t let it go so easily after the 40-25 win.

“I saw what you saw,” he told ESPN’s Sal Paolantonio. “He was getting choked on the ground. They get away with that because it’s Odell. I’m going to be on the phone with Al (Riveron, NFL senior vice president of officiating) when I get on the bus.”

Umpire Dan Ferrell was standing right over Humphrey and Beckham.

Riveron is at league headquarters in New York during games and leads the replay reviews.

Humphrey said he regretted his actions.

“I ran into him after the game and apologized,” he said of Beckham. “It’s not really the brand of football that I want to represent.

“The whistle blows, and it’s got to be over with. It’s never good when you get your team a flag. Like I said, it’s not the brand that I want to represent. So I was happy I was able to talk to him after the game.”

He said he thought Beckham accepted his apology but didn’t return it.

“I don’t think he did, but I definitely told the referee he should have been ejected,” Humphrey said. “But it is what it is. Emotions flare. I enjoy going against a top guy like that.”

Right guard Eric Kush had a good view of the choking.

He had eight catches for a career-high 167 yards but left with a concussion at the end of the third quarter. His final play was a 29-yard gain to the 2-yard line on a shovel pass. His head and shoulder appeared to slam into the ground as he dived for the pylon.

“When Jarvis goes out it’s a shock,” Kitchens said. “But we adjusted well.”

Landry had a 65-yard catch-and-run to set up an Austin Seibert field goal late in the first half. Landry broke a tackle and headed down the right sideline but started to stumble and couldn’t stay on his feet.

“He’s a guy, just get the ball in his hands, he’s going to make plays,” quarterback Baker Mayfield said. “He makes guys miss, he’s very quick and he’s one of those guys that’s hard to tackle in a phone booth. So he’s very elite at what he does.”

Damion Ratley moved into the No. 2 receiver spot and Taywan Taylor became the third wideout.

Tight end Ricky Seals-Jones was claimed off waivers Sept. 1 and has stepped into a significant role with starter David Njoku on injured reserve with a broken wrist.

Seals-Jones (6-foot-5, 243 pounds) is more receiver than blocker and was used often in passing situations ahead of Demetrius Harris and Pharaoh Brown. Seals-Jones came through with three catches for a career-high 82 yards, including a 9-yard touchdown in the first quarter. He started six games in two years with the Cardinals, catching 46 passes and four touchdowns.

“It definitely sucks losing a guy like David, can be a mismatch guy, but Ricky offers some of the same things,” Mayfield said. “He’s a tight end but he’s also more of a receiver in the same sense. So he creates a mismatch, and so for him to be able to just be in the right spot at the right time.”

Seals-Jones had a 59-yard catch-and-run when two defenders converged on Beckham in the flat, leaving him wide open down the seam.

“He just took advantage of a great play,” Mayfield said.

Defensive tackle Devaroe Lawrence picked a great time for the first interception of his life. Not only did it help seal the victory in the fourth quarter, it came four days after the birth of his second daughter, Maleya Alexis.

She’s getting the ball.

“I thank the Lord for it and we’re going to say that’s for my newborn baby girl,” he said. “It has been a big week, blessed week.”

Safety Jermaine Whitehead hit quarterback Lamar Jackson as he went to throw and the ball floated forward. Lawrence waited and grabbed it.

“I just start tracking it, man, and, shoot, by the grace of God I was lucky to come down with it,” he said.

His fellow linemen shared his joy.

“Happy as hell. Everybody,” defensive tackle Sheldon Richardson said. “He’s a spirited guy, infectious to the team. His morale, his camaraderie is needed.”

The Browns were without starting cornerbacks Denzel Ward and Greedy Williams for the second straight game. They pulled hamstrings within minutes of each other Sept. 19 in practice, haven’t practiced since and were inactive.

Strong safety Morgan Burnett (quadriceps) was also inactive for the second straight game, leaving the Browns three men down in the starting secondary.

Beckham’s streak of games with at least three catches was stopped at 60, third on the NFL’s all-time list. He had two catches for 20 yards.

** Seibert is 7-for-7 on field goals and 8-for-8 on extra points since missing the first extra-point try of his career.

** Defensive end Olivier Vernon got his first sack with the Browns, the 52nd of his career.

** Richardson was slow to get up after a play in the fourth quarter, holding his arm funny. He said he was fine.

** Whitehead was fined $10,527 for unnecessary roughness for a hit last week on Rams quarterback Jared Goff last week, who had dived headfirst on a scramble.

Notes: Myles Garrett won’t change his game despite expensive fines: “I guess that’s my toll”
Notes: Antonio Callaway returns from suspension this week, and Freddie Kitchens expects him to contribute right away