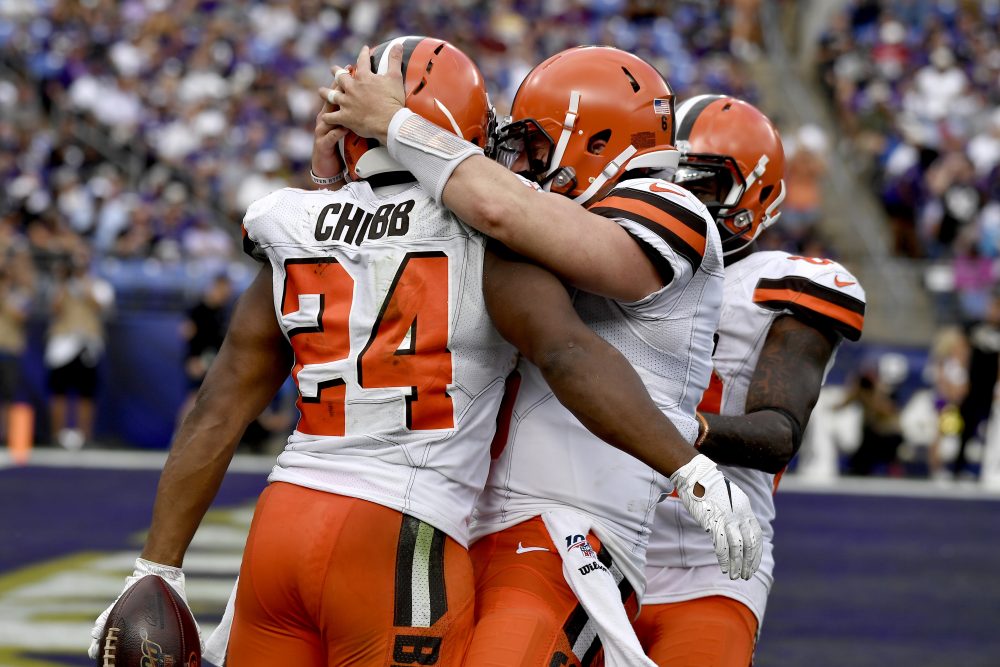 The Browns say they never quit believing in themselves during the ragged 1-2 start. The same can’t be said for everyone on the outside.

Freddie Kitchens was criticized as a play caller and first-time head coach, and quarterback Baker Mayfield came under fire for his decision-making, diminished accuracy and rush to leave the pocket.

The 40-25 win in Baltimore on Sunday sent a message to those who quickly discounted the Browns as all hype and no substance. It was written by the coach and quarterback.

“Freddie’s main message is that you can’t read any of the things. Everybody outside of this building, they do not know what we go through and they do not matter.”

The victory put the Browns (2-2) in first place in the AFC North for the first time since November 2014. The Ravens are also 2-2, but the Browns have the early tiebreaker.

A loss would’ve left the Browns two games and a tiebreaker behind, so the importance of the win shouldn’t be underestimated. While the impressive performance allowed fans to take a deep sigh of relief in the middle of their celebrations, the Browns viewed it as an affirmation.

“We were not nearly at the point where we were worried, anxious or had any of those feelings,” center JC Tretter said. “We just knew we had to go out and play better, and we went out and did that.

“We just kind of showed what we knew about ourselves already. We knew that was the type of game we were going to be capable of and that was kind of the first full-game taste on offense of what we thought we may always have been able to do.”

The offense amassed 530 yards, as Mayfield threw for 342 yards and Nick Chubb rushed for 167, including 131 yards and three touchdowns on 10 carries in the second half. The defense kept Ravens quarterback Lamar Jackson in check as a passer and forced three turnovers.

It’s the type of display the Browns expected all along.

“If we can keep putting together wins, we are going to be a playoff team at the end of the year. We have known the whole time that we have all the talent. We just have to get it meshed together and play a complete game. I think yesterday proved against another good team that we are able to do that and no telling how far we can go this season.”

Kitchens valued the road win inside the division — “that’s hard to come by,” he said — which pushed the Browns to 2-0 on the road for the first time since 1994. He stressed that it was only one win in a long season but was “proud” of the effort and liked how the players handled the adversity early in the year he knew was coming and said often in training camp he’d welcome.

“These guys have done an excellent job of being resilient from that standpoint, of just worrying about what they’re doing in the moment to get better, to make themselves better and collectively make the team better,” he said. “They stayed together. They didn’t splinter. They didn’t worry about what the outside noise was talking about.”

Schobert said the Browns didn’t panic and understand the league’s better teams improve throughout the season and play their best in November and December as they prepare for the playoffs.

“We have the talent, and we have the guys with the mindset,” he said. “There should be no reason that should not happen.”