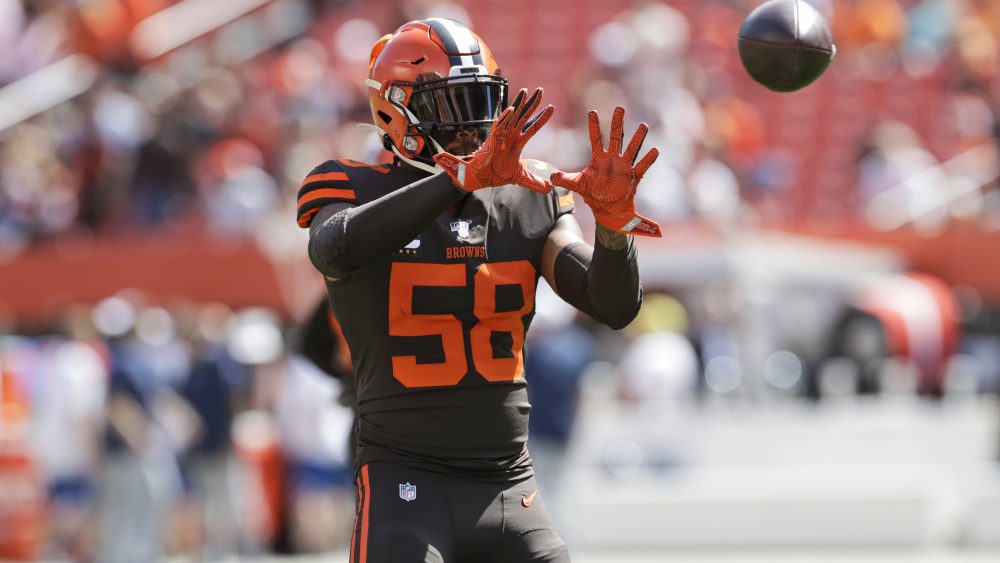 Linebacker Christian Kirksey is done for the year after surgery Wednesday to repair a torn pectoral muscle.

He may have played his final snap for the Browns.

Kirksey, 27, signed a four-year, $38 million extension in 2017 with $20 million guaranteed. The deal runs through 2021, but the team could cut him in the offseason without taking a big hit against the salary cap.

The Browns will have to decide whether to keep him and pay the $7.75 million salary and $1 million roster bonus due next season. They could also restructure the contract.

The decision is months away, and Kirksey will spend the time rehabbing. He suffered the torn pec Sept. 16 against the Jets and was placed on injured reserve Sept. 21.

He took time to decide if he’d have surgery or try to return this season. The surgery was Wednesday morning, and the team announced it was successful and a full recovery is expected.

“Surgery went well!” Kirksey posted on social media along with a picture of him in a hospital bed wearing a Dawg Check T-shirt. “Thank you everyone for your love and support.

“As you know, the last two years has been a tough time but tough times aren’t tougher than me!! I put my body on the line each and everyday to play this game I love. I don’t regret anything I do! I love you Cleveland and its all Gods timing. I’m forever grateful! And yal can read my shirt to know that its DAAAWWGGG CHECK forever!!!! One love #believeland”

Surgery went well! Thank you everyone for your love and support ❤️…As you know, the last two years has been a tough time but tough times aren’t tougher than me!! I put my body on the line each and everyday to play… https://t.co/Zd0cXYImFr

Kirksey, a third-round pick in 2014, had never missed a game until last season, when he ended the year on IR with a hamstring injury. He was voted a season-long captain again this year and had 11 tackles in two games.

“I won’t let you down,” Wilson tweeted Wednesday.

He also posted: “Hate when things like this happen to such a great dude/leader on any team. Came to work everyday played hard every snap & was always there for me when I needed him on and off the field. Prayers up big bruh you’ll most def play through me. #DawgCheck4Eva @Kirko58 #GodSpeed”

Kirksey, who traveled with the team to Baltimore for the game Sunday and broke down the pregame huddle, replied to Wilson.

“You know its in Gods hands!” he wrote. “Lil bro play every snap with passion bro! Enjoy it fam! Love u brudda”

Wilson has 16 tackles and a pass defensed in two-plus games in place of Kirksey on the weak side.

“Oh, awesome,” defensive tackle Larry Ogunjobi said of Wilson’s performance. “You saw the kind of plays he was making in preseason, so you know he’s that type of player. The guys who do it in practice, those are guys you’re going to see do it in the games. That just translates.

“I’ve seen him come to work every day as a rookie, he’s learning the game, he still has things to learn, but he’s making the plays that he needs to make and he’s doing it in an explosive way, so that’s awesome.”

Ogunjobi echoed Wilson’s sentiment that Kirksey has been an incredible resource.

“Awesome. Kirko is our defensive leader, vocal, and for him to get hurt, it sucks, but you see him around the building each and every day picking guys up, coaching guys up, even on the sideline making adjustments,” he said. “That’s what you need, that’s the difference.”