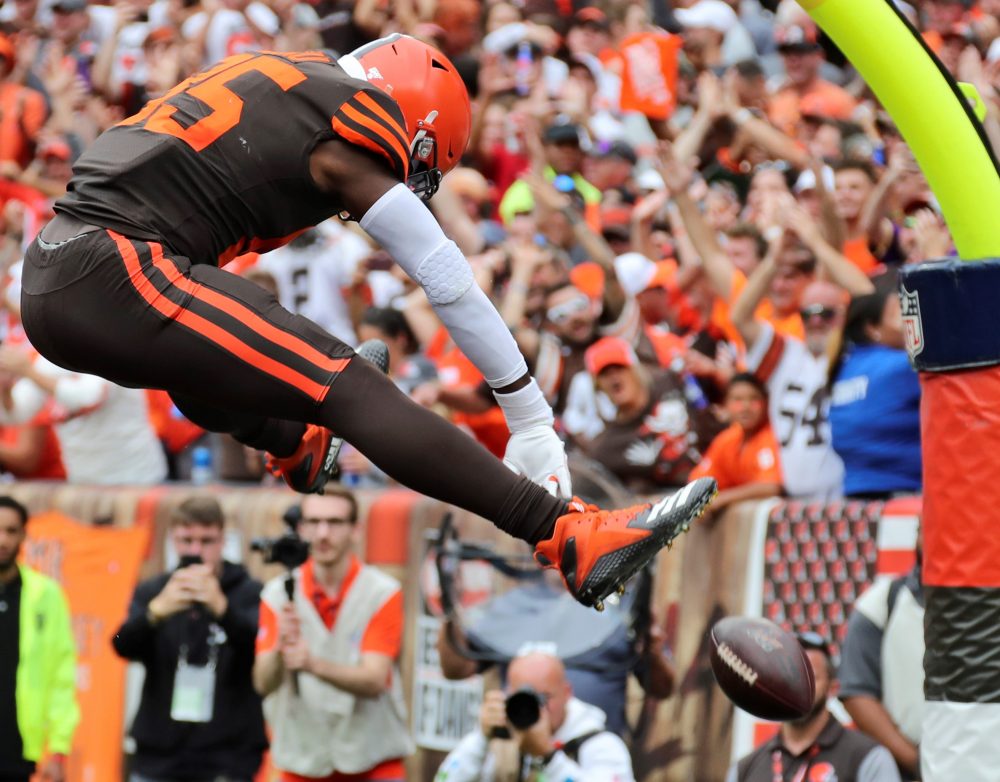 He counts himself lucky.

“It was fun until I hit the ground,” he said Thursday in the locker room. “Then it wasn’t that fun anymore.

“But I thank God that I’m alive. It could’ve been a lot worse. So, yeah, I’m just happy to be here and just working.”

Njoku was injured Sept. 16 on “Monday Night Football” when Jets cornerback undercut him as he leaped to catch a late and high throw from Baker Mayfield. Hairston hit his legs just as the ball arrived — perhaps a moment early — turning Njoku upside-down. He landed hard on his head and hand, bending the neck and wrist.

“It was a cheap shot,” Njoku said, speaking to reporters for the first time since the play. “But it is what it is. It’s football. It comes with it.”

Njoku, the No. 29 pick in 2017, was placed on injured reserve Sept. 20 and must miss at least eight games. He elected not to have surgery and plans to return as soon as the eight games have passed, which would be Nov. 24 against the Dolphins.

“Yeah, for sure. I think so,” he said. “I’m doing a great rehab process. Every day I’m here working, so hopefully it works out.”

He was taken out of the game because of the concussion, which kept him from playing with the broken wrist. He didn’t realize it was broken until an MRI the next day.

His right arm is in a cast and was protected by plastic as he headed toward the shower. He declined surgery to return quicker and avoid an invasive procedure. He wouldn’t say when the cast will be removed.

“I’m definitely coming back once I get cleared and I’m ready to go,” he said. “But it’s definitely good to stay away from needles and all that stuff, so I think I chose the right decision.”

He said he hadn’t heard from Hairston following the play, and asked “Who?” when his name was mentioned.

“I didn’t know his name, but no,” said Njoku, who had four catches for 37 yards and a touchdown in the opener. “It is what it is. I’m just glad my team came up with a win, so that’s all that really matters.”

Njoku said it was his second concussion and he’s been cleared from protocol. He realized he was lucky to avoid a serious neck injury.

“I have a pretty strong head,” he said. “So I think it would take a little more than that to take me out for a longer time than expected.

“I give all the credit to God for this. I believe it’s all part of his plan.”

Even though he can’t play, being around teammates helps.

“Tremendously, man,” he said. “During camp time, we grind so much together, we work together, we struggle, we sweat, we bleed together, so whenever one of us goes down with whatever it may be, our teammates just pick us up, our spirits and everything, our hopes, so it means a lot for us.”

The Browns are using Demetrius Harris, Pharaoh Brown and Ricky Seals-Jones in a tight end rotation in Njoku’s absence. Seals-Jones had three catches for 82 yards Sunday in the win over the Ravens, including a 59-yarder and a 9-yard touchdown.

“He’s a beast,” Njoku said. “I mean, all of our tight ends really are beasts. You know, you’ve got the hothead, you’ve got the speedster, you’ve got the old, smart one, so I feel like our group is very important because we all have different characteristics and we push each other that much further.”

He went “no comment” when asked which was the hothead, but Harris is the veteran and Seals-Jones is the former wide receiver, so process of elimination makes it Brown.

Mayfield, who has been trumpeting Seals-Jones’ ability for a couple of weeks, was asked about the athleticism of Njoku and Seals-Jones.

“They are different in the sense of Ricky has been a receiver in the past,” he said. “I think route-running-wise it is something that he is a little more natural in, and David is more natural in just ability.

“To each their own, but they both create somewhat of the same mismatch problem.”