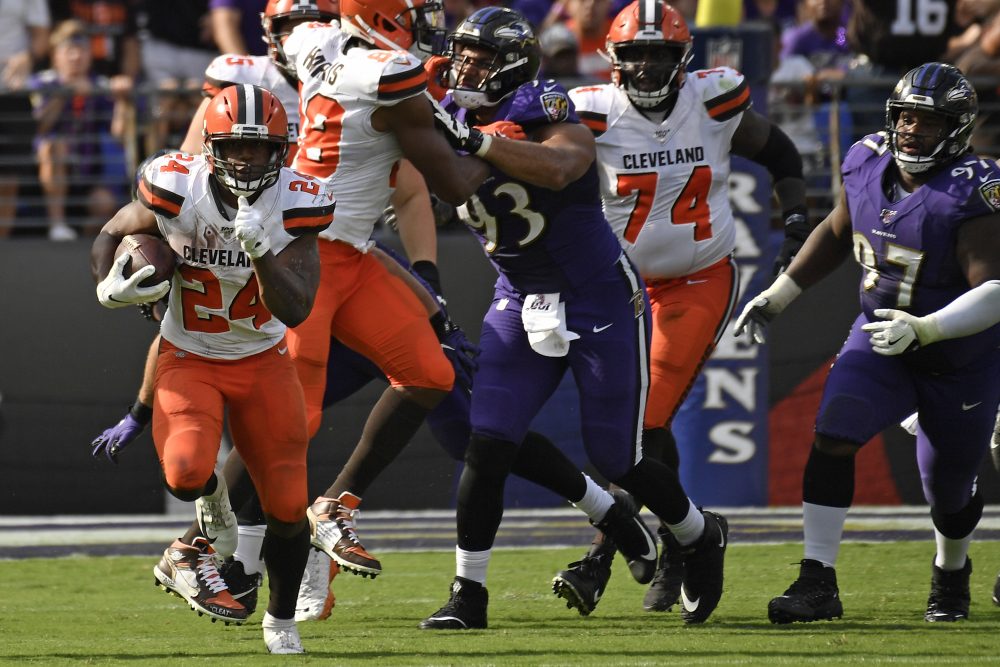 BEREA — Not many high school track athletes run the sprints and heave the shot put.

Nick Chubb did just that during his time at Cedartown High School in Georgia, which explains the dichotomy in his running style.

The power is obvious with one glance at his chiseled 5-foot-11, 227-pound frame. The speed is overlooked until he breaks into the clear.

“Speed and big, it usually doesn’t go together, but I am able to open up when I get an open field and it worked out,” Chubb said.


“He can roll. I think people underestimate his speed,” quarterback Baker Mayfield said. “Once he gets to that second level, he’s got true breakaway speed.”

They were talking about his latest long-distance touchdown, an 88-yarder Sunday in Baltimore that returned the momentum to the Browns in the fourth quarter and silenced the crowd during Cleveland’s 40-25 win.

“He does what Chubb does, and that is when he finds a crease, he takes it the distance,” center JC Tretter said.

Chubb, the No. 35 pick out of the University of Georgia in 2018, has played 20 games with the Browns and owns two of the three longest runs in franchise history.

Chubb reached nearly 22 mph Sunday after getting the pitch right, splitting the seam and galloping untouched for the score. The 88-yarder is the longest rush in the NFL this year, and he’s the third player in NFL history with at least two touchdowns of 85 yards in his first two seasons (Bob Hoernschemeyer, two in 1946-47, and Chris Johnson, three in 2008-09).

“All I saw was I took my three-technique down, and when Chubb went right past, I was like, ‘Man, I don’t see nobody else in the back making that play,’” right tackle Chris Hubbard said. “Then I saw (Ravens safety) Earl (Thomas) give up.

“He’s a great player. Chubb is fast. I think people don’t notice his speed. So when he took off running, I was like, ‘There’s no way anybody’s catching him.’”

Chubb, who was named AFC Offensive Player of the Week after 165 rushing yards and three touchdowns against the Ravens, doesn’t enjoy talking about himself but pointed to his high school track career as cultivating his rare combination of size and speed.

He was always a football player.

“I don’t think nobody really, really loves track,” he said. “It’s more something I did because I knew it would pay off for football. I knew if I ran I would just try to get faster, it helped me with my breakaway speed in football.”

Chubb’s speed is even more impressive given he suffered a gruesome injury in 2015 that included a knee dislocation and three torn ligaments. He takes even the courageous comeback in stride.

“That’s what I train for in the offseason,” he said. “I go back home and I have an amazing trainer who does a lot of speed training and weights and it’s paying off for me.”

Whatever Chubb lacks in self-promotion — a rarity in today’s world — he makes up for with hard work. He quickly established himself as a grinder, earning the nickname “Old School” as a rookie from then-teammate Duke Johnson.

Coach Freddie Kitchens would take 53 Chubbs on the roster.

“Nick, first and foremost, is an excellent individual,” he said. “He works his tail off every day he walks on the football field, walks into the weight room or walks into the classroom. You know exactly what you are getting from Nick every time he walks out there.

“After all of that, you throw in his ability, his skill set, his desire within to be successful and his resilient nature and chasing being good. I do not know what else you want in a football player.”

Chubb is fourth in the NFL with 398 rushing yards, 13 behind leader Christian McCaffrey of Carolina. He’s tied for second with 78 attempts, as the Browns have leaned on him while the passing game struggles with inconsistency, and is fourth with a 5.10 average per carry. His four touchdowns are tied for third.

“I don’t really look at them all together,” Chubb said of his stats. “I look at them more from just a game standpoint. I know I had a pretty good game last week.”

Has he set a goal to lead the league in rushing?

“Naw, I take it game by game and play by play so if it’s meant to be, it will be,” he said. “I’m not going to force anything to happen.”

The 49ers will present a challenge to Chubb, as they have five first-round picks on their defensive line, rank fifth in rushing defense at 75.0 yards a game and are the only team to not have allowed a rushing touchdown.

“They’re a great team,” he said. “They play hard. They play fast. They fly to the ball.”

The Ravens entered last week ranked third, so Chubb won’t be deterred. He was driven not to be tackled by one defender, saying he had nightmares after being stopped on a fourth-and-9 draw the week before against the Rams.

“I had that in the back of my mind knowing that I need to pick my legs up, my knees up at certain times,” he said. “I can’t help the play calling. If it was a bad call or whatever, the ball is still in my hands on fourth-and-9 so I gotta make something happen.”

Powerful, fast, unselfish, determined. Exactly what coaches are looking for in a running back

“Yeah, he is quiet and keeps to himself but is always working,” Tretter said. “You love having those guys on your team.”