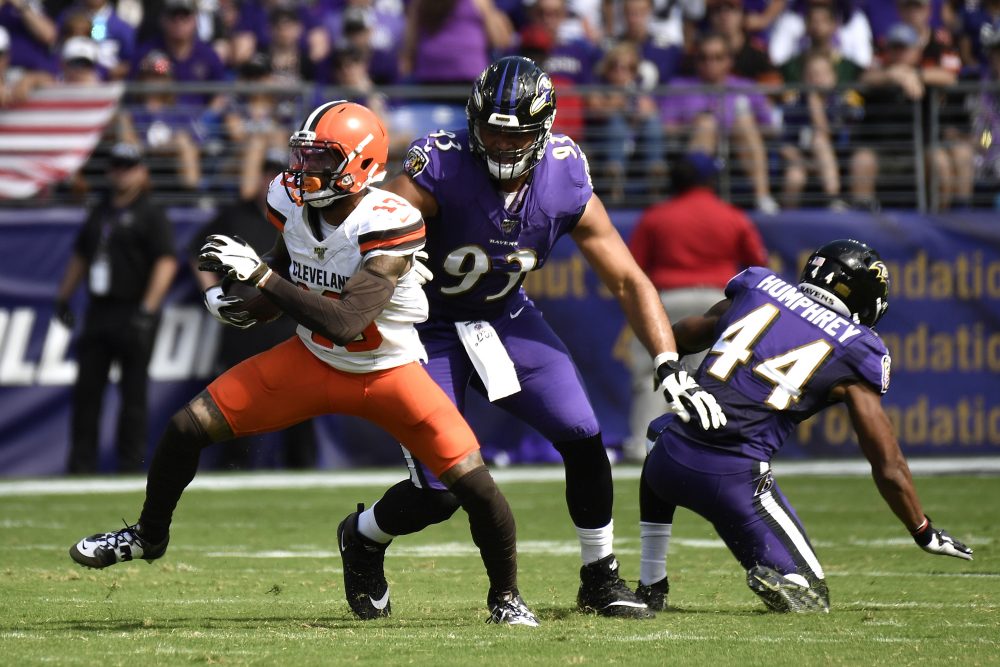 BEREA — Double coverage isn’t the only reason receiver Odell Beckham Jr. isn’t getting the ball as much as the Browns would like.

“Here is what I think is difficult: for Odell not to be able to run a route without getting grabbed,” coach Freddie Kitchens said Thursday. “I think that is what frustrates him. We are working on him just staying to course, and he does a good job of staying on course. I will just say that.”

Beckham had the worst statistical game of his six-year career Sunday in the 40-25 win over the Ravens, catching two passes on seven targets for 20 yards. He didn’t have a catch until the fourth quarter.

While the postgame focus was on the fight with Ravens cornerback Marlon Humphrey and whether Beckham was choked, Kitchens harped on the “grabbing” issue Thursday.

Quarterback Baker Mayfield said the Browns sent examples to the league office to review. The officiating department then lets the team know whether a penalty should’ve been called.

“That is the frustrating part, but that is what teams are going to do to him — try to take him out of the game, frustrate him,” Mayfield said. “If people are worried about that, they are worried about the wrong things. That is why I continue to say it is a mismatch game and a matchup game for us. We need to pick our poison.”

The Browns took advantage of the extra attention the Ravens paid Beckham to erupt for 530 yards of offense, as receiver Jarvis Landry and running back Nick Chubb had big days. Through the 2-2 start, Beckham has 21 catches for 308 yards and a touchdown.

Kitchens was asked if he expects cornerbacks to play a more physical style against Beckham following the Ravens’ success.

“Odell is a physical guy, too,” he said. “I am not scared of a corner being physical with Odell. That is not what I am scared of. I do not want people grabbing him down the field, though.”

San Francisco coach Kyle Shanahan forced his way out of Cleveland after spending 2014 as the Browns offensive coordinator, famously using a PowerPoint presentation to convince ownership to let him out of his contract. He said he labored over the decision.

“It was a very stressful decision for me,” he said on a conference call. “You’re never going to fully explain yourself to people and you don’t want to have to ’cause you’re not trying to throw any other people under the bus. But you come to points in your career where you need to decide something that you believe in.

“It was an important time in my life. I talked a lot about it with my wife, it was a decision we made and we were willing to live with it. Happy with where it’s led me. I’m happy to be in San Francisco.”

Shanahan said he’s glad for the Browns’ success after so many down years.

“I’m excited for all you guys out there,” he said. “My wife, kids and myself really enjoyed our time in Cleveland. The people are great, the stadium, the atmosphere of the Browns was unbelievable.

“They’ve been hungry for a long time and they’re getting what they deserve. It’s the right town, good people and they’ve got a good coaching staff, good owner and a good GM and some really good players.”

Landry remained in concussion protocol and didn’t practice. He had eight catches for 167 yards against the Ravens.

“Obviously Jarvis had an incredible game,” Mayfield said. “It would hurt us to not have a guy in there. He makes great plays in the pass game, but his communication about getting people lined up and getting people to see the same things when he is just out there, especially in the run game, he does not get a lot of credit for his run-blocking ability. He is a guy that sticks his nose in there day in and day out.”

** Receiver Rashard Higgins (knee) returned to practice in a limited capacity. He hasn’t played since the opener.

** Tackle Kendall Lamm (knee) is still out after getting hurt in the opener.

Punter Jamie “The Scottish Hammer” Gillan was a game into his NFL career when he made a giant change, going from a three-step approach to two. Special teams coordinator Mike Priefer had Gillan try it previously in practice, then brought it up again before the Jets game and they went for it.

“I trust Coach Priefer with everything that we think is going to work,” Gillan said. “We know there are going to be training wheels a couple times, but as long as you stick to it, work on your technique and use the Jug work as much as possible, I am sure it can be successful.”

It has been thus far, as he was named AFC Special Teams Player of the Month for September, the NFL announced. Gillan tied for second in the AFC with 11 punts inside the 20-yard line and helped the Browns (2-2) hold opponents to 19 punt return yards in the four games. He was named Player of the Week in Week 2 after pinning the Jets inside the 20 five times.

With the change in approach, the goal for Gillan, who has a 41.6-yard gross and 40.6 net on 20 kicks, is to speed up the process and increase consistency.

“We are hoping and what we think is going to happen is eliminating that jab step will eliminate inconsistencies, so catching the ball, flipping it, one-two and it is out of there,” Gillan said. “It should eliminate people wanting to block it because they realize they are not going to get to the ball. It should be nothing but positive for us.”

In his 56th game, free safety Damarious Randall got his first NFL sack.

Randall blitzed and had Baltimore’s Lamar Jackson, but he was able to shake free momentarily before Randall got him again and took him down.

“Yeah, Lamar’s pretty elusive up in the pocket, so he’s definitely one of the best guys about avoiding sacks, for sure,” he said.

Randall played cornerback for three years in Green Bay before being traded to the Browns and said that limited his opportunities.

“But, yeah, I was definitely aware of it,” he said of the sackless streak. “I actually missed a couple early up in my career that I don’t want to talk about. For sure, definitely took the monkey off my back Sunday.”

He took another shot at former coordinator Gregg Williams when asked about not blitzing last year.

“I was about 35 yards deep last year,” he said. “I don’t think I could’ve made it there from that standpoint.”

Receiver Antonio Callaway practiced for the first time after being suspended for the first four games for violating the NFL’s drug policy. He’s expected to play vs. the 49ers.

** Mayfield was clocked at nearly 19 mph as he ran down the field during Chubb’s touchdown run.

“I have to open the legs a little bit more. I have more in the tank,” he said.

** Chubb was FedEx Ground Player of the Week after an online fan vote. He rushed for 165 yards and three touchdowns against the Ravens.

** In November the team will open “Browns Fit,” a team-themed fitness center in the Flats.