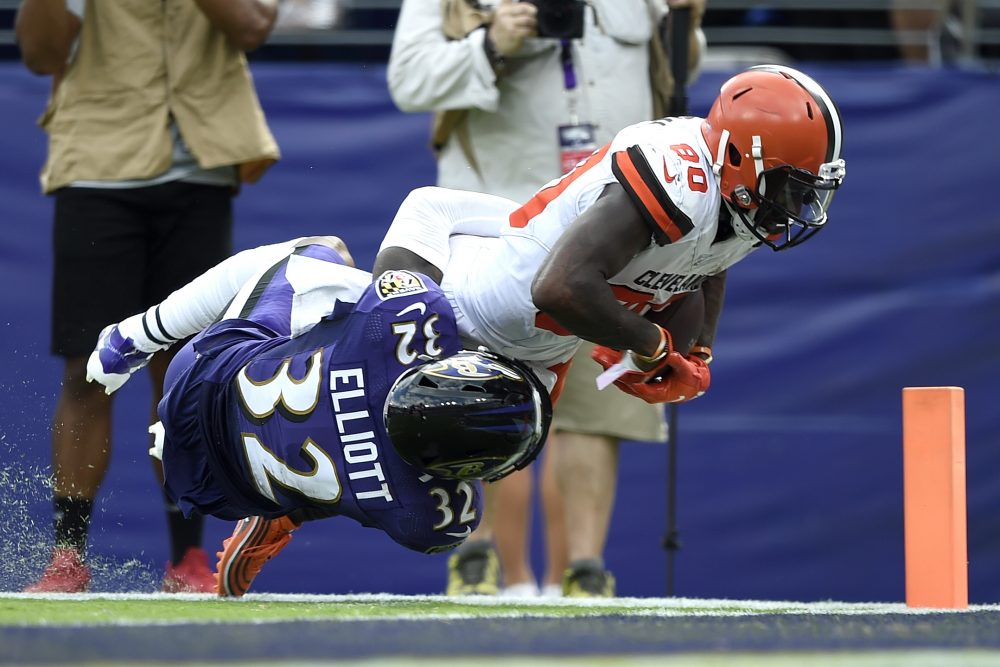 BEREA — Baker Mayfield may finally have his full complement of receivers Monday night against the 49ers.

Jarvis Landry was cleared from concussion protocol Friday after less than a week, practiced and will get the chance to build off his eight-catch, 167-yard performance against the Ravens.

Antonio Callaway returns from a four-game drug suspension and is expected to have a significant role. And Rashard Higgins could be back after missing three games with a knee injury. He was limited in practice but appeared to do more.

They join Odell Beckham Jr. for a formidable quartet.

“Getting Hig back this week, getting Callaway back, it’s good,” Landry said. “We know Hig has been making plays, Callaway’s definitely made plays, offense, special teams, it’s going to be good to see what those guys bring to the game.”

Landry missed the fourth quarter of the 40-25 win over the Ravens on Sunday after landing hard on his head and shoulder when he dived to try to score on a 29-yard shovel pass from Mayfield. He was diagnosed with a concussion, placed in the protocol and didn’t practice Thursday.

“I’d never been through it before, so I didn’t think I would even miss the rest of that game,” Landry said. “But the NFL decided that it was best that I didn’t go back out there and go through the protocol first.”

Landry, who has 18 catches for 328 yards and an 18.2 average through the 2-2 start, came close to scoring again vs. the Ravens but couldn’t keep his balance on a 65-yard gain.

“The most unathletic play ever in my career, I promise,” he said. “I wish I had that one back.

“I wish I could have stood straight up at some point to be able to start running again. I never really started running, just was falling, a long fall.”

“It just is something I’ve been waiting to see,” Beckham said. “When we were on opposite teams, I remember him not being able to do everything that he wanted and I told him the day that I came here, I was like, ‘That’s not going to happen anymore.’ And if they’re going to play like that, hopefully he goes 2,000-yard season. That’s what we want. I love seeing him catch the ball.”

Callaway doesn’t expect to be eased into action in his season debut against the 49ers.

Callaway said he’s 100 percent after suffering a high ankle sprain in the preseason opener Aug. 8. With the ankle and suspension, he had gone nearly two months without playing or practicing until Thursday.

“I’m just ready to get back and contribute — do what I do, do my part,” he said. “It was hard watching them play Sundays. It was hard, real hard.”

He said he felt he let the team down with the suspension but his teammatese, Kitchens and general manager John Dorsey were in his corner.

“I made a choice and it cost me. I grew from that and I’m just here. I took steps forward to becoming a better person and better myself.”

Kitchens said Callaway has looked good in two practices and needs to build endurance. Callaway is eager for his season to start — in prime time.

“I’m built for it,” he said. “I just can’t wait until Monday. Monday can’t come any faster.”

In addition to his role at receiver, he said he’d return punts.

“He has so much talent,” special teams coordinator Mike Priefer said. “You have to be able to trust him back there. He has not been hit this year, but if he protects the ball like we have preaching to him since Day 1, then we would have a chance.”

Center JC Tretter said he was fined $14,000 for the unnecessary roughness penalty he got when he pulled Ravens cornerback Marlon Humphrey off Beckham during a fight. The minimum fine is $14,037.

“I wouldn’t have changed anything I did,” said Tretter, who will appeal the fine. “I understand the intent of the rule. Usually it’s about pulling somebody off a fumble or a pile when you don’t want a situation to escalate when it’s a non-situation. But when you have a guy mounted on top of another choking him, if the answer is ‘We want you to just stand there,’ I’ll take the fine for that. That’s not an answer I’d work with.

Beckham offered to pay the fine because he started the fracas, but Tretter declined.

Safety Jermaine Whitehead was involved in all three takeaways Sunday, forcing a fumble, intercepting a deep pass from Lamar Jackson and hitting Jackson to set up an easy interception for tackle Devaroe Lawrence.

The average fan may not have been familiar with Whitehead, who was claimed off waivers Nov. 7 and played seven games with the Browns last season, but coordinator Steve Wilks has been singing his praises since the spring.

“Satisfaction it gives me, but I am not surprised,” Wilks said of Whitehead’s performance vs. the Ravens. “Sometimes it may not stand out from the standpoint of the splash plays it did this past week, but Jermaine is extremely smart and he does a great job. I am excited that he is out there, very happy with his performance last week and it is well-deserving.”

Whitehead was named the winner of the NFL Way to Play Award for Week 4, receiving a $2,500 equipment grant through USA Football to be given to the youth or high school program of his choice.

The special teams have been much improved over last year, but the kickoff return unit has lagged behind. The Browns rank last in average start after a kickoff, the 22.7-yard line.

Priefer was disappointed in the performance against the Ravens, as Taywan Taylor returned two kicks for 30 yards and D’Ernest Johnson one for 13.

“We did not do a very good job. Baltimore got after us pretty good,” Priefer said. “We have to block better, and our returner quite frankly has to make somebody miss, too. He has to do something other than just running into a wall of defenders. There is a lot of room for improvement there and we have to continue getting better.”

DON’T FORGET ABOUT HIM

San Francisco cornerback Richard Sherman was one of the league’s top cornerbacks, making four straight Pro Bowls from 2013-16. He signed with the 49ers before last season after tearing an Achilles tendon in his final season with the Seahawks. He’s started 17 games with the 49ers with an interception and eight passes defensed.

“Still a really good football player,” offensive coordinator Todd Monken said of the 31-year-old. “You have to be alert to where he is. He has good ball skills, good anticipation. He has played a long time so you have to make sure from a route-running standpoint that you don’t give away what you are doing and from a scheme standpoint that you do not give him something that allows him to see things from a mental standpoint.”

** Backup linebacker Willie Harvey (shoulder) was placed on injured reserve after leaving the game Sunday. He had one special teams tackle in two games.

Callaway is expected to take his roster spot.