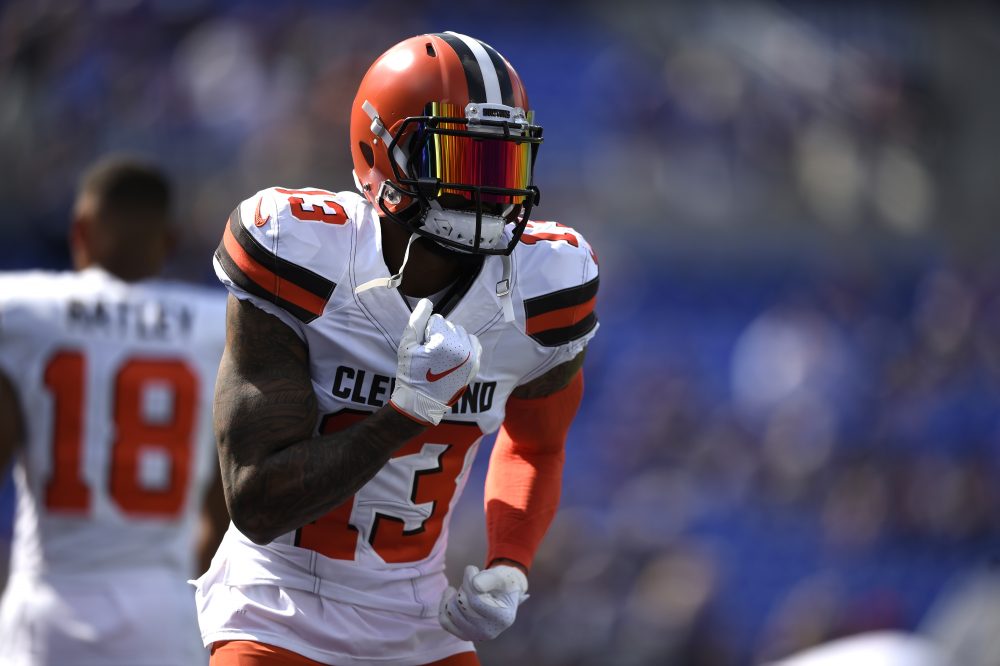 BEREA — A part of Odell Beckham Jr. wishes he had pummeled Ravens cornerback Marlon Humphrey when he had the chance Sunday.

The bigger part is proud he showed restraint.

“I’ve just come so much further than that,” Beckham said Friday. “In the heat of the moment just to be able to — it was an opportunity for me to retaliate and take things way further. He was on the ground, I was standing up still and I kind of just let the moment pass and I sort of regret letting the moment pass but I’ve come a long way.

“I probably would have been suspended for the next game if I had done what I wanted to do or more knowing how I’ve been treated. It was just something where I had to look out for my teammates and not hurt them even more than the 15-yard penalty and be sitting out a whole other game. This is football. This isn’t MMA. This isn’t ‘Street Fighter,’ that’s a different story. I’m trying to make it more football than anything else.”

Beckham said he was fined — he wouldn’t say how much — for the fight with Humphrey during the Browns’ 40-25 win. Beckham threw a punch and held onto Humphrey’s face mask and Humphrey stuck his fists into Beckham’s throat during the main event, and they battled throughout the game.

Beckham hasn’t always been able to stop himself. His brawl with former Panthers cornerback Josh Norman in 2015 is infamous and a YouTube classic. Beckham was suspended a game and fined $52,529.

He could be fined more than $100,000 for the Humphrey fight given his history. He went on a rant about how the NFL takes too much of the players’ money in fines, including for meaningless uniform infractions, and said he’ll appeal.

“It’s money out of my future family and kids’ pockets,” said Beckham, who’s been fined more than $220,000 in his career, according to spotrac.com. “I don’t care if it’s $5, they’re still taking money from me. So I will appeal it, I always will appeal it.”

Coach Freddie Kitchens and Beckham’s teammates were incensed that Humphrey wasn’t ejected after pinning Beckham to the ground and applying force to his throat. They referred to it as choking and were bewildered when the Ravens’ website wrote a story saying Humphrey “definitely” didn’t choke him.

Beckham was asked if he was choked.

The takedown during the fight wasn’t the only time Humphrey had a grip on Beckham’s jersey, according to the Browns. Kitchens reiterated his displeasure with a lack of penalties called when Beckham is grabbed downfield.

“It’s always like that and it’s something that I can’t sit there and worry about every single call,” Beckham said. “My favorite comparison, and I’m not saying I am him, but LeBron. Every time he goes up for a layup, is there contact there? Of course. But if they called it every single time, then it’s not even going to be fair. All he’s got to do is drive, he’s going to create contact.

“I’ve got to get off of being held and get open even more. I guess put myself in position better to where I don’t get held.”

Beckham had only two catches for 20 yards against the Ravens, the worst statistical day of his six-year career. He’d prefer more production but wanted the focus on the offensive exploding for 530 yards and the important victory.

His greatest impact was creating open opportunities for others. Nick Chubb rushed for 165 yards and three touchdowns, Jarvis Landry caught eight passes for 167 yards and tight end Ricky Seals-Jones had a 59-yard catch-and-run when his defender went to double-team Beckham.

“If teams are going to play us like that, we’ll put up 40,” he said. “We’ll keep putting ‘W’s’ on the calendar and put ourselves in position to work toward the playoffs.

“When I get to see my brothers shine and succeed, I can’t help but be happy. This game is not about one individual. I’d be sitting here lying to say I didn’t want to help the team and go for 200 yards and help win. Everybody wants to be a part of the process, but sometimes it’s a bigger role, just drawing two people, three people sometimes.”

The Browns are still figuring out how to best take advantage of all the attention Beckham gets from defenses.

“It is stuff that he can do to affect a defense that I think we did not expect until we really saw it,” quarterback Baker Mayfield said. “Now we really know how we need to game-plan, how we need to format things and try to get him the ball and get him involved. It has been a learning process, but it is definitely something that was eye-opening for me.”

He said it’s “unbelievable” what Beckham’s presence does for the rest of the skill players.

“The vertical stretch and just the body presence on the backside of drawing two defenders,” Mayfield said. “Knowing that, we have to take our shots with him when he is one-on-one.”

Beckham talked a lot about his unselfishness during the 19-minute interview, including how the perception of him as a teammate is incorrect. Coordinator Todd Monken likes the reality of Beckham.

“Odell has been great. He works hard, pays attention to the details, wants to be included in the offense and yet wants to be a good teammate,” he said. “That is hard for skill guys. I have coached skill guys my whole life. The way they get a chance to showcase their ability is to touch the ball, so I get it. With that, he has been a tremendous teammate.”